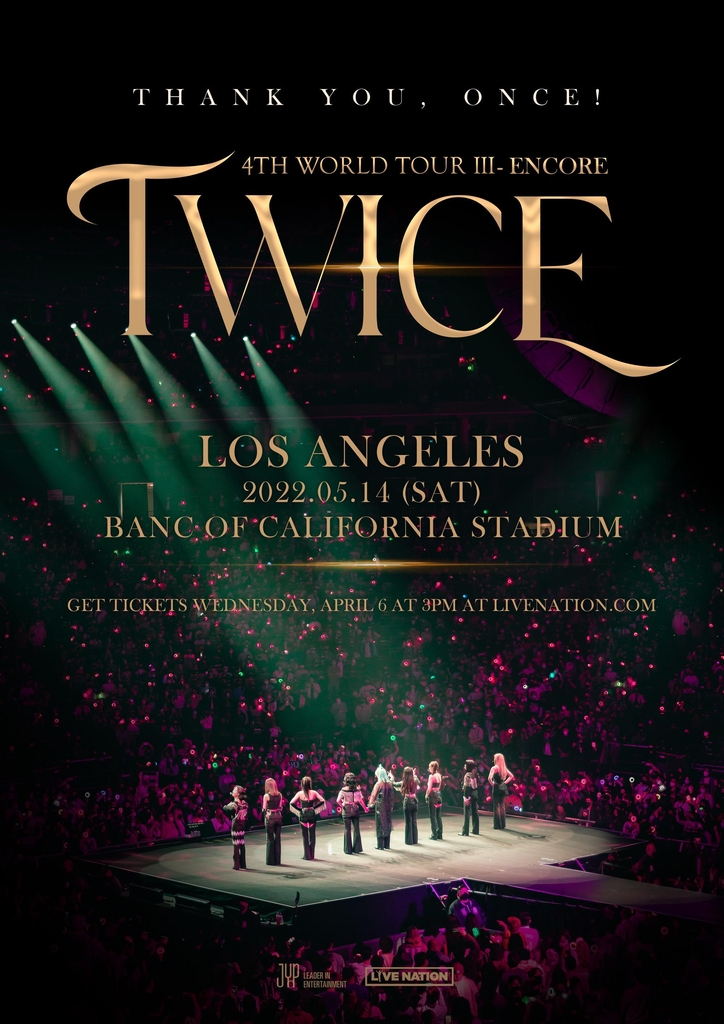 This image provided by JYP Entertainment on Thursday, shows a promotional poster for K-pop girl group TWICE's additional concert in Los Angles on May 14 (US time). (JYP Entertainment)

K-pop girl group TWICE will return for a one-day encore concert in Los Angeles as part of its fourth world tour that took it to five US cities, including L.A., in February, the group's agency said Thursday.

The nine-piece group will hold the concert at the 22,000-seat Banc of California stadium on May 14 (US time), becoming the first K-pop girl group to hold an individual show at a stadium in North America, JYP Entertainment said on the band's official social media channels.

The band played seven sold-out concerts in L.A., Oakland, Atlanta, Forth Worth and New York during its recent world tour titled "III" on Feb. 15-27, drawing around a combined 100,000 fans, according to the agency.

TWICE has been gaining popularity in the US since its third full-length album "Formula of Love: O+T=〈3" debuted at No. 3 on the Billboard 200 main albums chart following its release in November. The album's main track "The Feels," which is the group's first English single released in October, reached No. 83 of the Billboard Hot 100 main singles chart.

Before the additional L.A. concert, TWICE is scheduled to hold three live concerts at Tokyo Dome in the Japanese capital on April 23-25. (Yonhap)