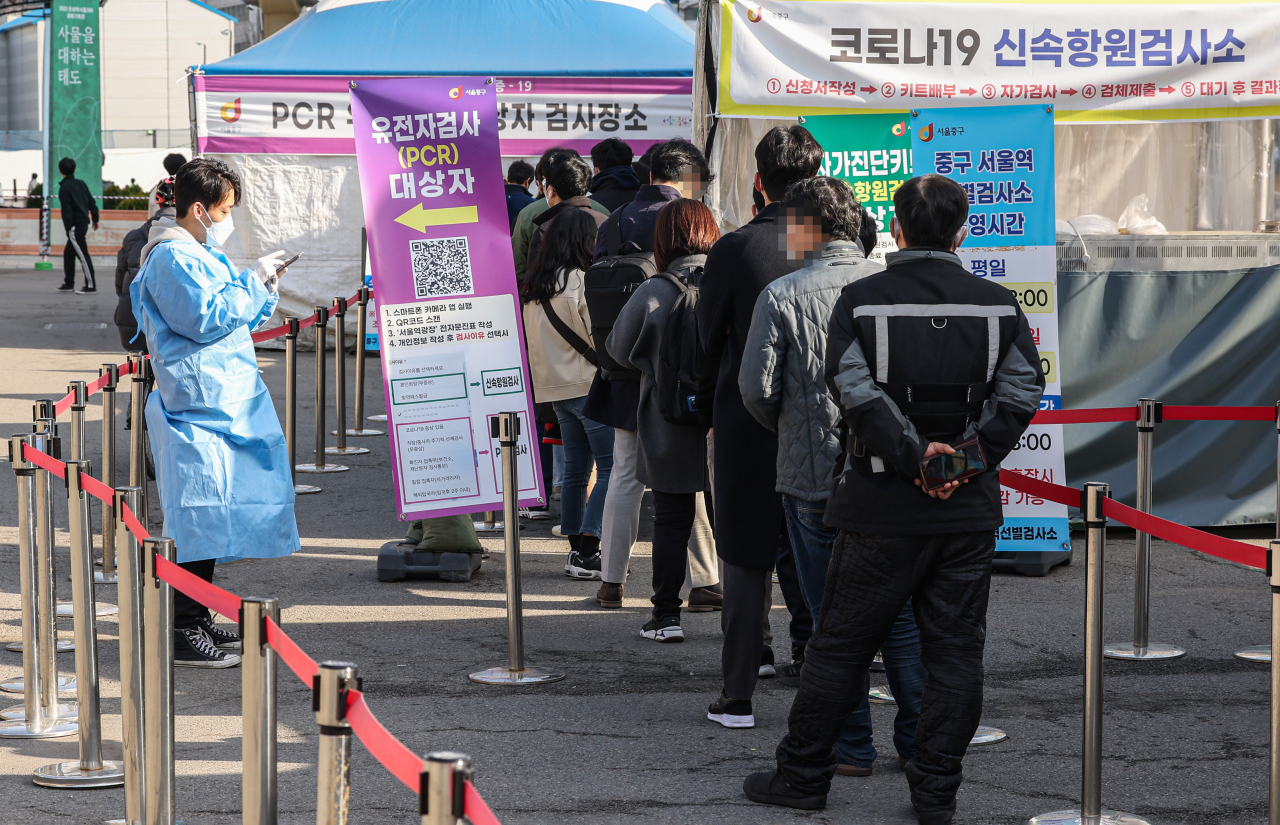 People stand in line to take coronavirus tests at a makeshift testing station in front of Seoul Station on Tuesday. (Yonhap)

Tuesday's tally marked a surge from 187,213 cases the previous day, when the daily count came to a nearly one-month low. The daily caseload had been on a constant slide from Wednesday through Monday.

The country added 237 new COVID-19 deaths Tuesday, up 50 from the previous day's tally. The fatality rate stood at 0.12 percent.

The number of critically ill patients came to 1,215, down 58 from Monday, the KDCA said.

Serious cases rose to above 1,000 earlier this month and have since been above the level. The KDCA said the number of deaths and serious cases could grow further in the coming weeks.

The health authorities have said that the omicron-driven virus wave peaked last week, and new infections are forecast to fall below 300,000 on average in two weeks, though the possibility of an upturn remains over the spread of the even more transmissible "stealth omicron" subvariant.

The BA.2 subvariant became the dominant strain in the country by accounting for 56.3 percent of the total infections last week, according to the KDCA.

The rate has been on the rise from 22.9 percent in the first week of this month to 26.3 percent in the second week and further to 41.4 percent the following week, it added.

As of Tuesday, 32.67 million people out of the total population, or 63.7 percent, had received booster shots. The number of fully vaccinated people came to 44.48 million, representing 86.7 percent, the KDCA said.

The government has called on people, particularly those aged 60 or older, to get booster shots, as the proportion of infections in the age group has risen recently to stay above 20 percent.

In a move to better support at-home treatment patients, the government decided to have more local medical clinics provide face-to-face treatment to them.

Local clinics seeking to handle COVID-19 patients are required to designate a specific time and space for them, and to secure extra medical staff, according to the health ministry.

The government will begin receiving applications from candidates Wednesday, and the applicants are allowed to provide the service immediately without separate state approval procedures, according to the health ministry.

Currently, the government has designated 279 clinics across the country as facilities reserved for at-home treatment patients, but calls have grown for their expansion in line with the surge in total infections and the subsequent rise in patients staying at home.

The government has shifted away from rigorous contact tracing and treatment, and focused on dealing with seriously ill patients and ways to prevent deaths following the omicron-driven wave of the pandemic.

Later this week, the government is expected to announce a decision on whether to further relax antivirus curbs, as the current restrictions, including the eight-person cap on private gatherings and the 11 p.m. business curfew, are supposed to expire Sunday.

The government has relaxed some social distancing rules in efforts to regain normalcy and support small businesses and self-employed people hit hard by the pandemic.

Some have called for the full lifting of social distancing rules, but the government opted for gradual changes, citing concerns over the possible upsurge in infections. (Yonhap)