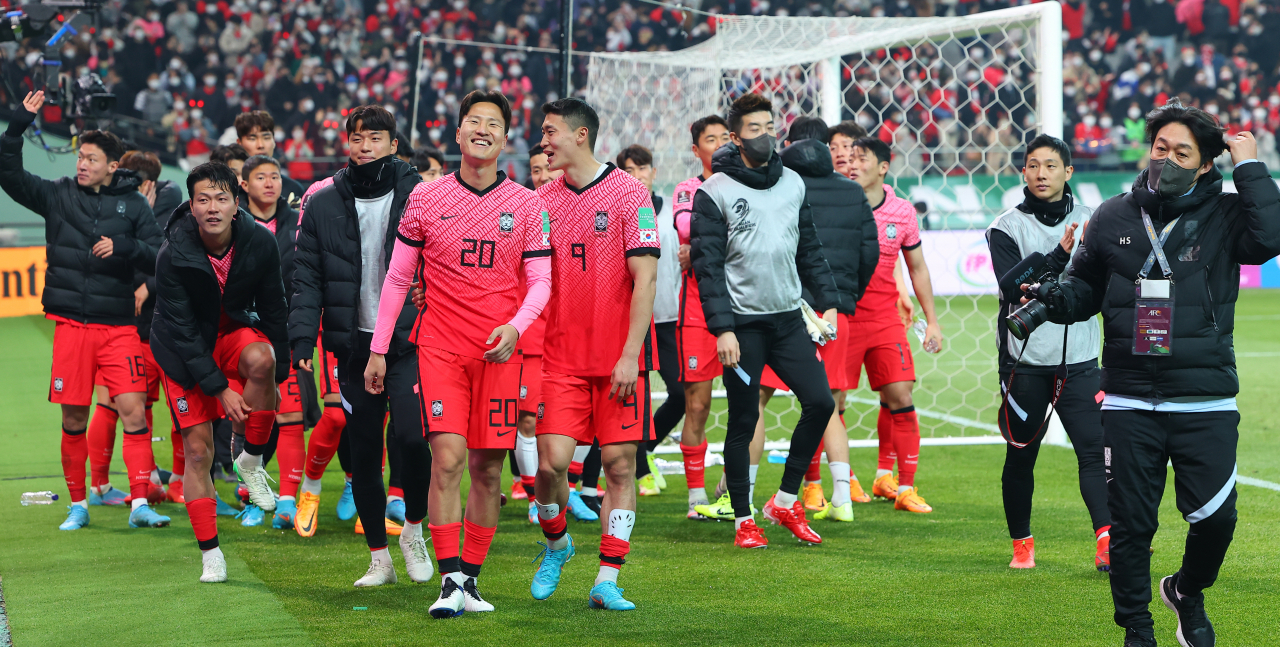 South Korean players and coaches greet fans at Seoul World Cup Stadium in Seoul last Thursday, after defeating Iran 2-0 in the teams' Group A match in the final Asian qualifying round for the 2022 FIFA World Cup. (Yonhap)

Sitting pretty atop their group with a spot in this year's FIFA World Cup already secured, South Korea will look to close out the regional qualifying phase on a high note against the United Arab Emirates (UAE) this week.

It will be the last matchday in Group A of the final Asian qualification round for the World Cup. South Korea currently lead the group with 23 points as the only undefeated nation among six, having beaten Iran 2-0 at home last Thursday for their seventh win, against two draws. Iran, with 22 points from seven wins, one draw and one loss, are in second place.

Those two countries have long locked down their spots in the big tournament as the top two teams in Group A. They only have the top seed left to play for on Tuesday.

With Iran favored to beat Lebanon in their finale, South Korea will likely have to beat the UAE to finish on top.

The UAE will have plenty at stake. With the top two-ranked nations from Groups A and B qualifying directly for the World Cup, No. 3 seeds from the two groups will meet in a playoff, the winner of which will then move on to another, intercontinental playoff for the final shot at making the World Cup. The UAE currently have a one-point edge over Iraq, 9-8, in third place. Iraq will play Syria on Tuesday.

In their previous meeting in November, South Korea beat the UAE 1-0, behind Hwang Hee-chan's 36th-minute penalty. The final score wasn't an accurate reflection of how thoroughly South Korea outplayed their opponents.

And South Korea head coach Paulo Bento has repeatedly talked about his desire to win Group A, even with the goal of qualifying for the World Cup already accomplished. Beating Iran for the first time in 11 years certainly helped, and now Bento's players will have to take care of one final piece of business.

Captain Son Heung-min scored an impressive goal against Iran for his fourth goal of the final qualification round and moved into a five-way tie for the lead in that category.

And Son will once again have to carry the offensive load for a team hit hard by COVID-19. Three players were replaced before the start of training camp last Monday after testing positive for the virus. Then two more players, including up-and-coming striker Cho Gue-sung, were infected with COVID-19 within the past seven days.

Striker Hwang Ui-jo will try to end his international goal scoring drought that reached nine matches last week. Hwang has yet to find the back of the net in the final round, though he still has the most goals among all South Korean players during Bento's tenure with 13 goals in 32 appearances.

South Korea will be making their 10th consecutive appearance at the World Cup in November in Qatar. The draw is scheduled for Friday in the host country. (Yonhap)