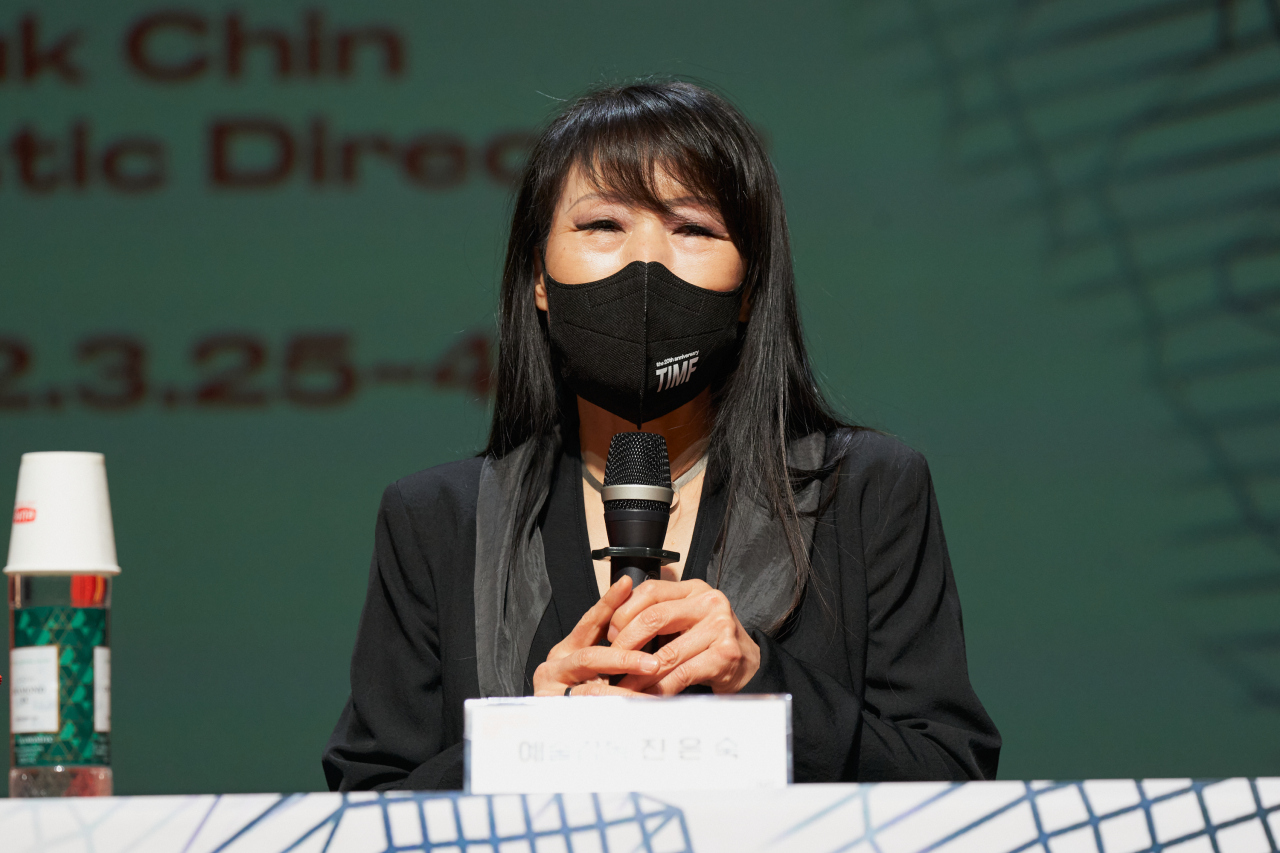 Chin Unsuk speaks during a press conference at the Tongyeong International Music Festival in Tongyeong, South Gyeongsang Province on Friday. (TIMF)
TONGYEONG, South Gyeongsang Province -- On Friday evening at Tongyeong Concert Hall, Chin Unsuk, one of the world’s leading contemporary composers, sat down in the audience to witness the first performance of the Tongyeong International Music Festival, which she now leads as its artistic director for the next five years.

Chin observed as Finnish conductor Dalia Stasevska was met with rousing, minuteslong applause from the audience for her direction of Andrew Norman’s Asia premiere of “Play: Level 1.”

She also watched as cellist Truls Mork captivated the audience with his rendition of Dvorak’s “Cello Concerto in B minor Op.104, B. 19”

“It was wonderful to finally see TIMF take off in the face of difficult situations like the COVID pandemic and Russia’s invasion of Ukraine right before the festival,” Chin told The Korea Herald on Saturday.

“I’m happy that against all of these odds, most of the performances will be carried out as planned,” Chin said.

The first concert was not without some hiccups. Originally, the Cologne Chamber Orchestra was intended to play, but the ensemble wasn’t able to travel to Korea. So the Tongyeong Festival Orchestra stepped in, mastering Norman’s technically complex piece and several of Dvorak’s pieces in a remarkably short amount of time.

In addition to this last-minute swap, there were several alterations and cancellations at the festival. The canceled performances — both Harry Partch Plectra and Percussion Dances and drag queen singer Lee Hee-moon Project — were meant to show Chin’s artistic direction, a mix of genres and forms as reflected in TIMF’s 2022 theme: “Vision in Diversity.”

Returning to South Korea as an artistic director for TIMF was for some an unexpected move. Chin left her composer-in-residence position at the Seoul Philharmonic Orchestra in 2018, ending her 11-year relationship with the orchestra. The orchestra was mired in internal woes at the time, including anonymous allegations against the then CEO and conductor Chung Myung-whun and police investigations.

“I never thought I would have a chance to work in Korea again,” Chin said. “For about a year after receiving the offer, I kept contemplating the idea.” Then Chin’s husband Maris Gothoni, the head of artistic planning at Stavanger Symphony Orchestra, reminded her of how happy she looked when she interacted with young musicians.

“At the same time, I have a sense of responsibility and desire to be of help for talented young musicians,” Chin said.

The relationship between Chin and Tongyeong goes back to her early days on stage. TIMF feels like a family, she said, “because I’ve been observing how Tongyeong has evolved into a music city since the 1990s.” Chin was a composer-in-residence in 2005 and 2011 for TIMF.

Now, for the next five years, she will lead the 20-year-old festival as the artistic director. It is the first time for Chin to be engaged in a full-scale festival for multiple years, and many hope Chin’s participation can bring the TIMF to the next level.

“Even before I took the directorship, many musicians who had been to TIMF recommended it to their fellow artists. The beautiful scenery, great artistic programs as well as the energy the Korean audience emits seem to have contributed to participating musicians’ positive experiences,” Chin said.

Chin Unsuk (Priska Ketterer)
The Korean-born composer said her time focusing on composing after leaving the Seoul Philharmonic Orchestra was precious and comforting. However, she also finds that working with various musicians and ensembles like ones at TIMF helps her compositions.

Chin, now based in Berlin, is known for having composed few but sought after pieces. She barely composes only one piece or a piece and a half within a year, according to Chin.

In January, Chin’s long-waited Violin Concerto No. 2, “Scherben der Stille” (“Shards of Silence”), was unveiled by the London Symphony Orchestra and then in New York with the Boston Symphony Orchestra on March 14, despite her promise to limit her repertoire to one work per instrument.

“I listened to Leonidas Kavakos’s performance for years, from which I got a lot of inspiration,” Chin said of the exception.

She said she is certain that she won’t be writing another concerto for the violin, but has mulled over the possibility of a viola concerto for French violist Antoine Tamestit.

She composed a Cello Concerto for cellist Alban Gerhardt. Chin also composed a concerto for sheng player Wu Mei. Sheng is an ancient Chinese mouth organ, this composition resulted in her first piece for an Asian instrument.

The second violin concerto was an exception but it was still a part of her creative process that she perfected later on in her career. When composing a concerto for an instrument, the 60-year-old musician often gets inspiration from instrument players.

“I used to think of music in a very abstract way. Being inspired by a particular musician is something I developed as I grew older,” Chin said. 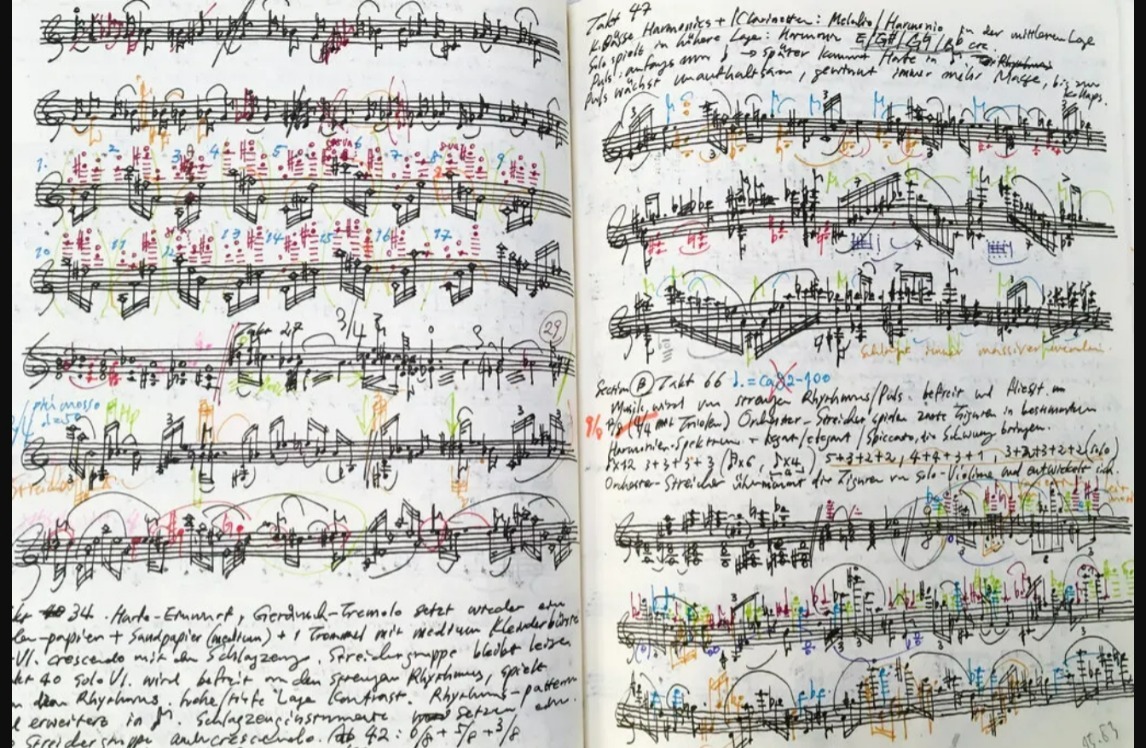 Chin’s composition note. (Chin Unsuk)
Her creative process is well known. She only handwrites her compositions and conducts the entire creative process only in her head. In addition, she said the title of each piece is as important as the music itself.

“I would say 30 percent of my energy is put into the naming of the piece,” she added.

Chin was born in Gimpo in 1961. She taught herself piano at a young age before studying at Seoul National University with renowned composer Kang Seok-hee, who introduced her to contemporary music. She went on to study under Gyorgy Ligeti in Germany., which ended up being a turning point in her career.