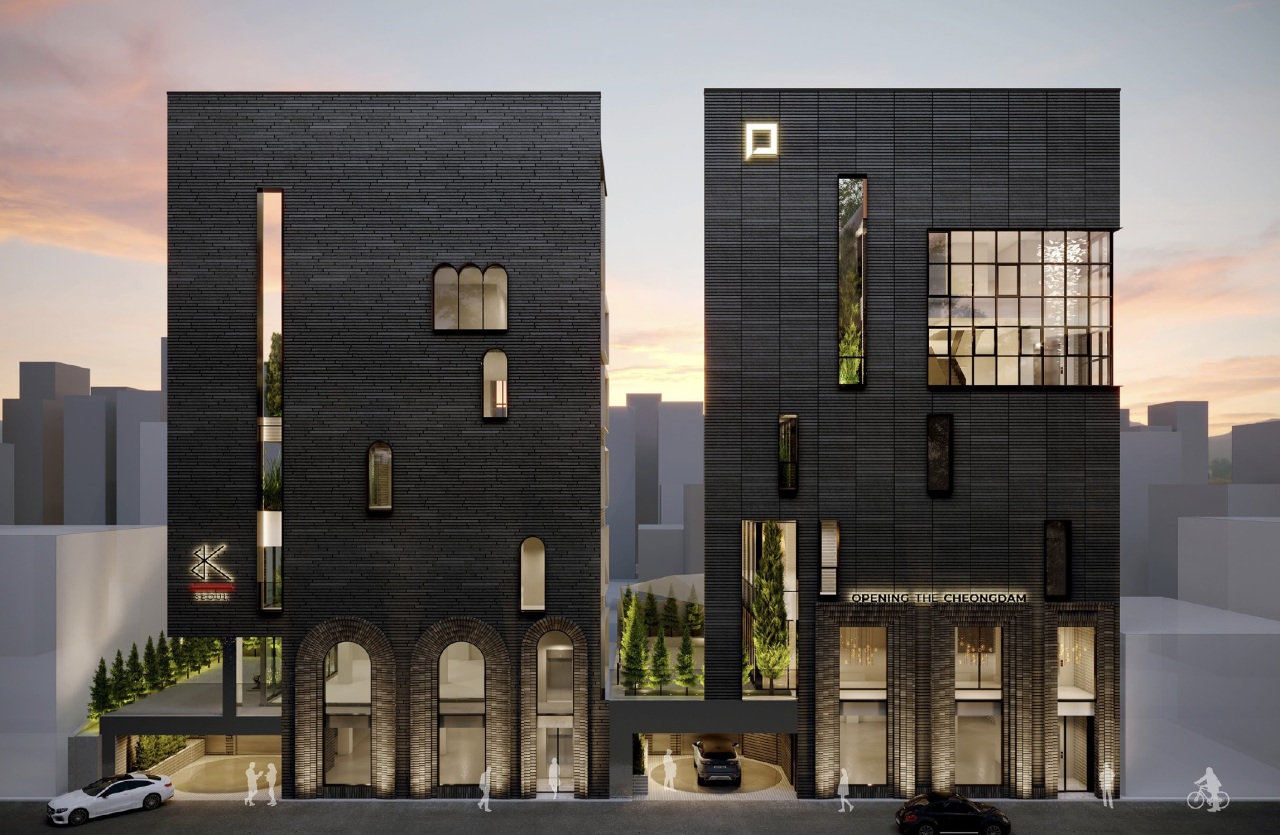 Open’s headquarters in Cheongdam-dong, Seoul (Open)
Despite COVID-19’s lingering impact on the South Korean economy, the country saw a 4 percent growth last year, exhibiting a moderate performance on the back of strong exports and rebound of the global economy.

But mom-and-pop businesses, mostly those in the food and beverage industry, have been severely hit by repeated rounds of restrictions on business hours.

The pandemic has forced restaurants here to close by 9 p.m. each day under a business curfew, which was introduced to blunt a record surge in coronavirus. Latest government figures showed that restaurants saw their sales diminish by 9 percent last year compared to 2020, recording an average of 280 million won ($229,578) in revenue.

But there are some lucky ones that were able to endure the pandemic and recorded a steady rise in sales. Included on that list is Open. The local restaurant franchise company established in 2015 earned a total of 44 billion won last year.

“Over the past few years, we created a system to make stable monthly sales which brought us with at least a 200 percent jump in annual sales,” said Open CEO Hong Seong-cheol in an email interview with The Korea Herald.

“We regularly conduct polls to hear feedback from customers on the menu, asking them which were considered the best and the worst -- items selected as the worst are pulled out and replaced,” he added.

According to Hong, all of Open’s seats at 13 newly opened stores since the outbreak of the coronavirus in 2020 and 2021 have been designed as private rooms, based on the consumer needs.

“Last year, we opened our first fine dining restaurant Dresden Green despite the pandemic, but managed to secure enough customers and make profit by only receiving a limited number of reservations,” he added.

“But on top of all these, the essence is to focus on offering the most satisfactory culinary experience for customers and constantly develop and upgrade our menus.”

“Under our goal to become the No. 1 global food service group, we have a deep trust in the local F&B market -- its level, compared to those in other countries, is at the top,” Hong said. “Thanks to the industry’s approachable environment for restaurant entrepreneurs and high-quality dining concepts, differentiated menus and marketing tactics which have been shaped through local competitions, the Korean F&B sector has made remarkable progress.”

Open is set to launch its fine dining restaurant in London in the second half of this year, the first Korean food franchise there.

“We are going to show global customers how advanced South Korea is in terms of F&B service, and prove to them about how Korea’s biggest export can be F&B business, along with cars and smartphones,” he added.

Before he founded the company, Hong worked as a sales account manager at e-commerce firms Tmon and Wemakeprice. Based on his expertise and experience in covering restaurant discount promotions for three years, he naturally learned about industry trends and devised a new business plan.

His first brand was Tokyo Sirloin, a premium Korean beef restaurant which now has five branches across Seoul.

Now he runs a total of 38 restaurants of 20 franchise brands, from fine dining to casual dining restaurants specializing in beef, lamb, frozen pork belly and burgers, leading over 500 employees and chefs. His company has targeted 100 billion won in sales by the year-end.

The reason behind Hong’s idea for brand diversification is closely related to Japan’s boycott movement last year that was caused by a controversial TV advertisement.

He said many thought his restaurant was a Japanese brand due to the name Tokyo Sirloin, which dragged down sales by 20 percent. It was then he decided to diversify the franchise brands to avoid risks impacting the overall sales at the company and directly manage them for a reliable profit system. 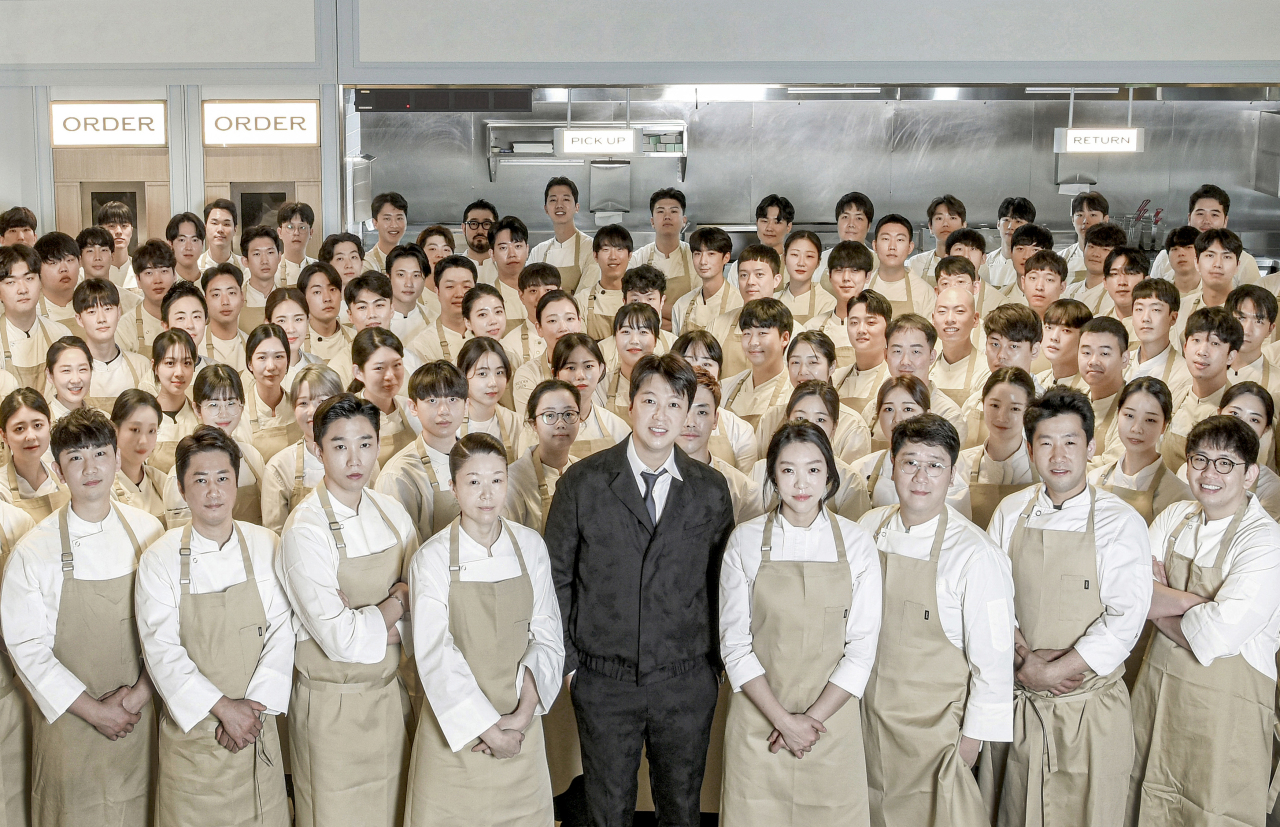 Open CEO Hong Seong-cheol poses for a photo with chefs and employees who work at Open’s F&B brands. (Open)
He believes that his motivation for business expansion lies in people.

“Those working in the F&B business are normally paid less but work more. Their pay is about half the level compared to those in the US,” said Hong.

“They deserve better treatment. And that’s why I want to build a company that can grow and succeed in the long term, with talented, passionate people,” he said, adding that his company is prepared to teach employees culinary skills and provide compensation that are higher than the industry’s standard.