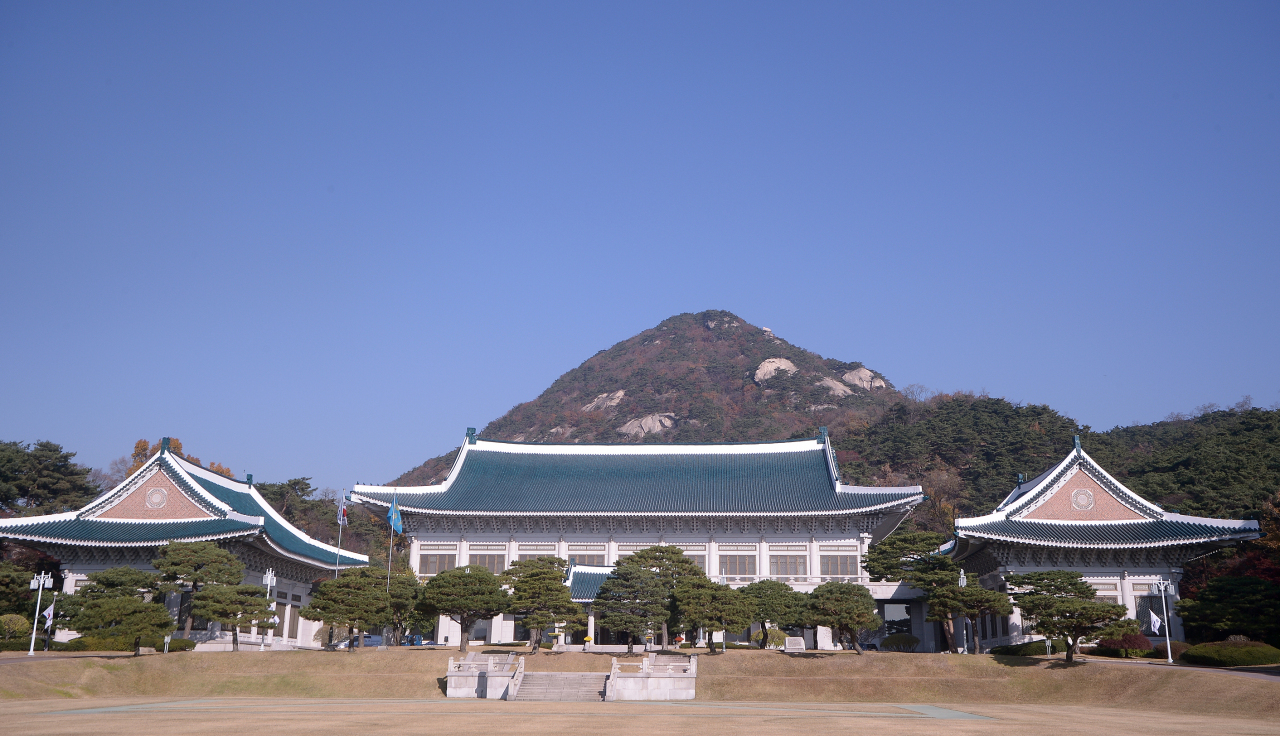 A view of Cheong Wa Dae in Jongno-gu, central Seoul (Yonhap)
President-elect Yoon Suk-yeol announced that he would begin his term on May 10 as president of the Republic of Korea at the Ministry of National Defense compound in Yongsan-gu, central Seoul.

Cheong Wa Dae -- which has been the presidential office for 70 years, since South Korea’s inaugural President Syngman Rhee -- is to open to the public on the same day.

Putting an end to the legacy of the “imperial presidency” and to better communicate with people are reasons offered in explaining the plan to abandon the Blue House. The presidential office located right on the foot of Bukaksan, the 342-meter-high granite mountain in the middle of Seoul, has often been characterized as an isolated place.

“I do understand the concerns that I might be rushing to move the presidential office too hastily with just 50 days left before starting the term. But I determined that it would be much more difficult to move away from the symbol of imperial power, Cheong Wa Dae, after moving into the compound,” Yoon said in a press conference on March 20. 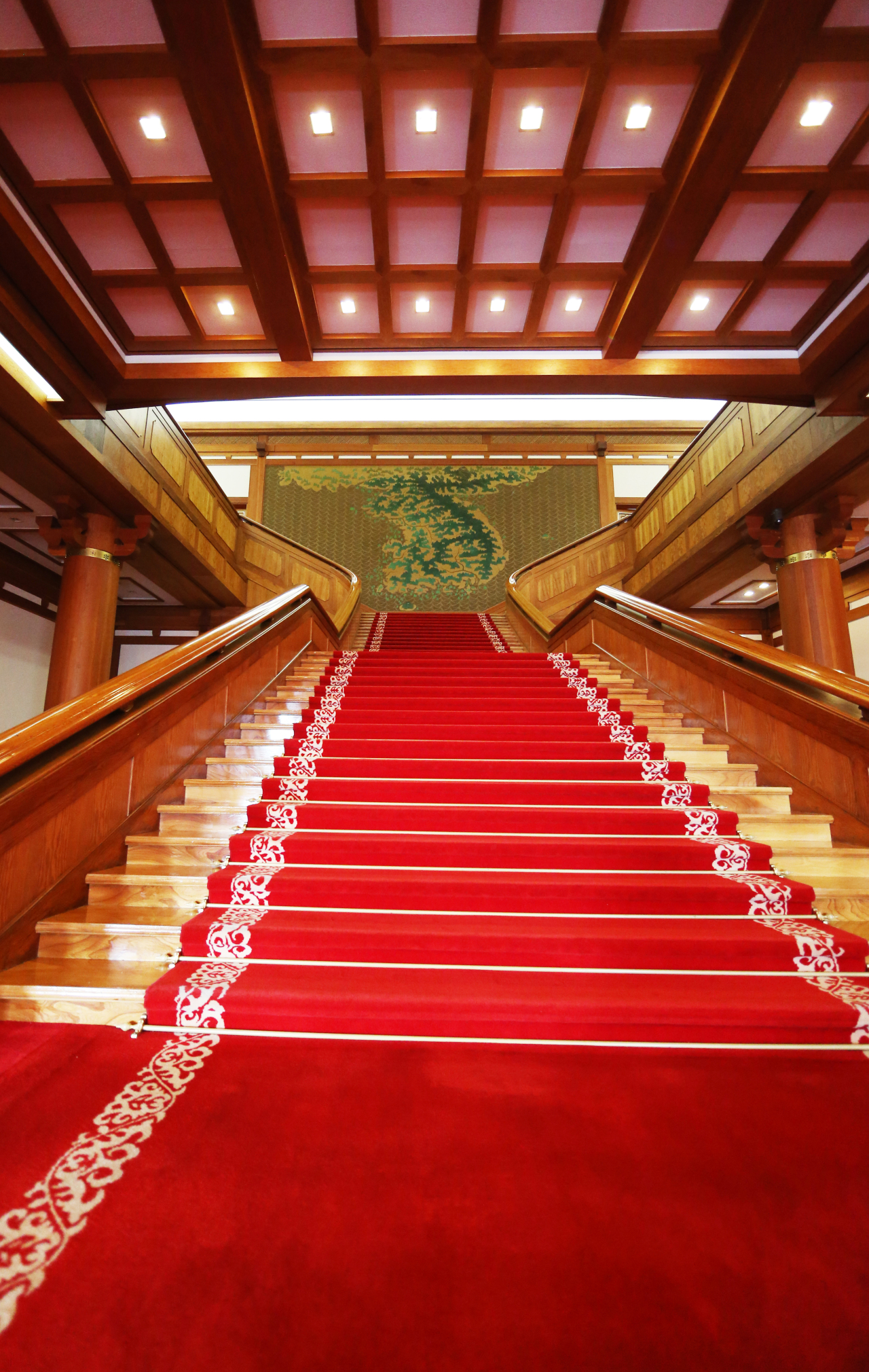 The main office building of Cheong Wa Dae in Jongno-gu, central Seoul (Yonhap)
Relocating the presidential office has been a frequently revisited issue. Past presidents, including Kim Young-sam (1993-98) and Kim Dae-jung (1998-2003), sought to move to better communicate with the people, but their plans were not realized due to practical problems. Current president Moon Jae-in also pledged during his election campaign to open the Gwanghwanum era, moving the presidential office into the nearby area of downtown Seoul, but he too later gave up on the idea.

Architect Kim Won, who pursues environmentally friendly values in designing buildings, said the current site of the presidential office is not suitable in terms of the theory of divination based on topography -- known as “pungsujili” in Korean -- that he considers important when picking a site as an architect. He referred to how perfectly the main palace Gyeongbokgung was located at the heart of Seoul when the Joseon era was established in 1392 by Taejo.

“The kingdom lasted for 500 years, which is quite a long period in history. Jeong Do-jeon chose the site of the palace. You can never ignore pungsujili when choosing a site to build things. Pungsujili is a theory based on physics and statistics, which is quite reliable,” he said.

“Cheong Wa Dae is located at the dead end of Bugaksan, which means the place has too much strong energy. When the compound of Gyeongbokgung was designed, they left out the current site of Cheong Wa Dae, which is located right outside of the palace walls,” he added. 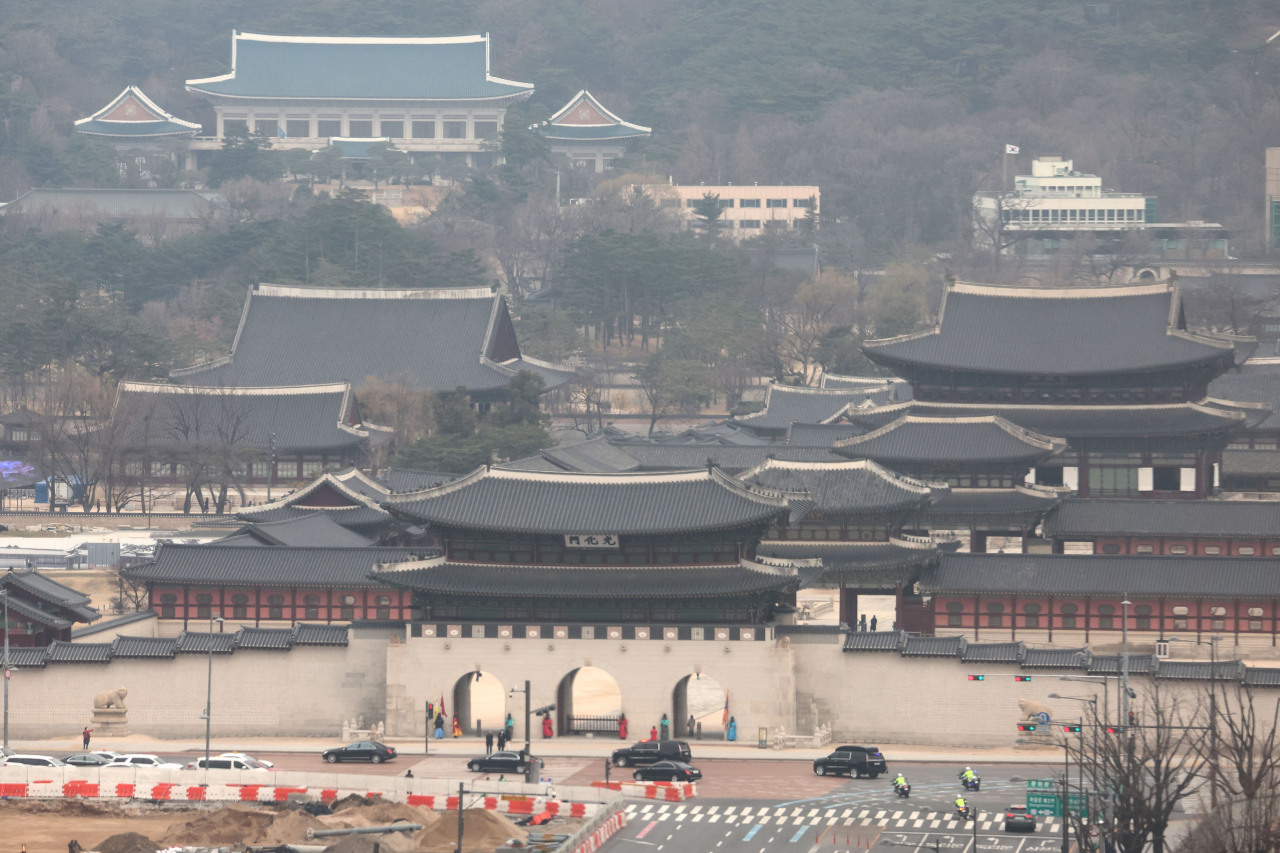 A view of Cheong Wa Dae (back) and Gyeongbokgung in Jongno-gu, central Seoul (Yonhap)
Architect Seung Hyo-sang, who served as the Seoul Metropolitan Government’s first city architect from 2014 to 2016, said in an interview in 2016 that the site of Cheong Wa Dae is “impure from the beginning,” as it had been used as the Japanese governor general’s official residence during the Japanese colonial era of 1910-1945.

“I do have my own personal view about Cheong Wa Dae, but it is not an appropriate time to mention the issue of relocation of the presidential office,” the architect said in comment to The Korea Herald on Wednesday.

Cheon Jang-hwan, an associate professor of architecture at Kyung Hee University, said the problem about Cheong Wa Dae is if the issues of communication and breaking the “imperial” presidency raised by the president-elect can be fixed or improved at the current site.

“The presidential office itself has a symbolic meaning, the Ministry of National Defense compound does not seem to satisfy the symbolic significance of a presidential office. How can you push for such an important issue in just a few days?” Cheon posed.