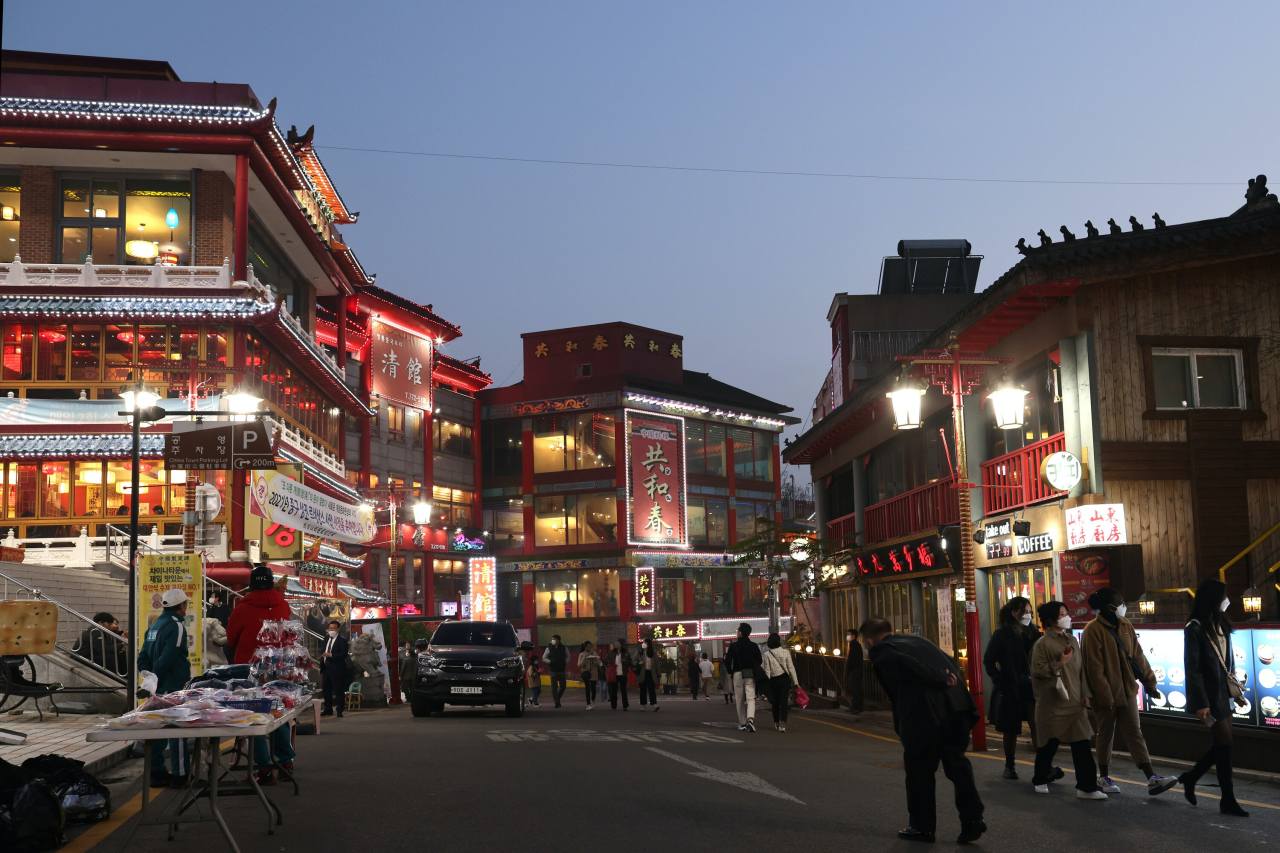 Incheon’s new Chinatown has many descendants of overseas Chinese from Shandong province, China, located directly across the West Sea from Incheon. The Korean city was the birthplace of Korea’s Chinese noodle dish jjajangmyeon. Photo © Hyungwon Kang
In the 19th and 20th century, Western missionaries introduced brick buildings to Korea. Most of the building work was done by overseas Chinese workers.

According to Yi Jung-hee, a professor at Incheon National University, Qing dynasty workers were large-framed, cheap wage workers who were hired by Japanese to build the Supung dam, a 900-meter long dam along the Amnok River (Yalu River) and Changjinho dam, better known as the Chosin Reservoir, where US troops took severe losses against advancing Chinese Communist Forces before retreating during the Korean War.

Incheon, the birthplace of Korea’s best-known Chinese noodle dish, jjajangmyeon, has always been the gateway into the West Sea of Korea, also known as the Yellow Sea.

During the Joseon Kingdom period, foreigners in Korea were limited to living in exclusive foreigner settlement districts, known as “jogye,” in Incheon. By law, foreigners were not allowed to travel more than 4 kilometers away from their respective enclaves. 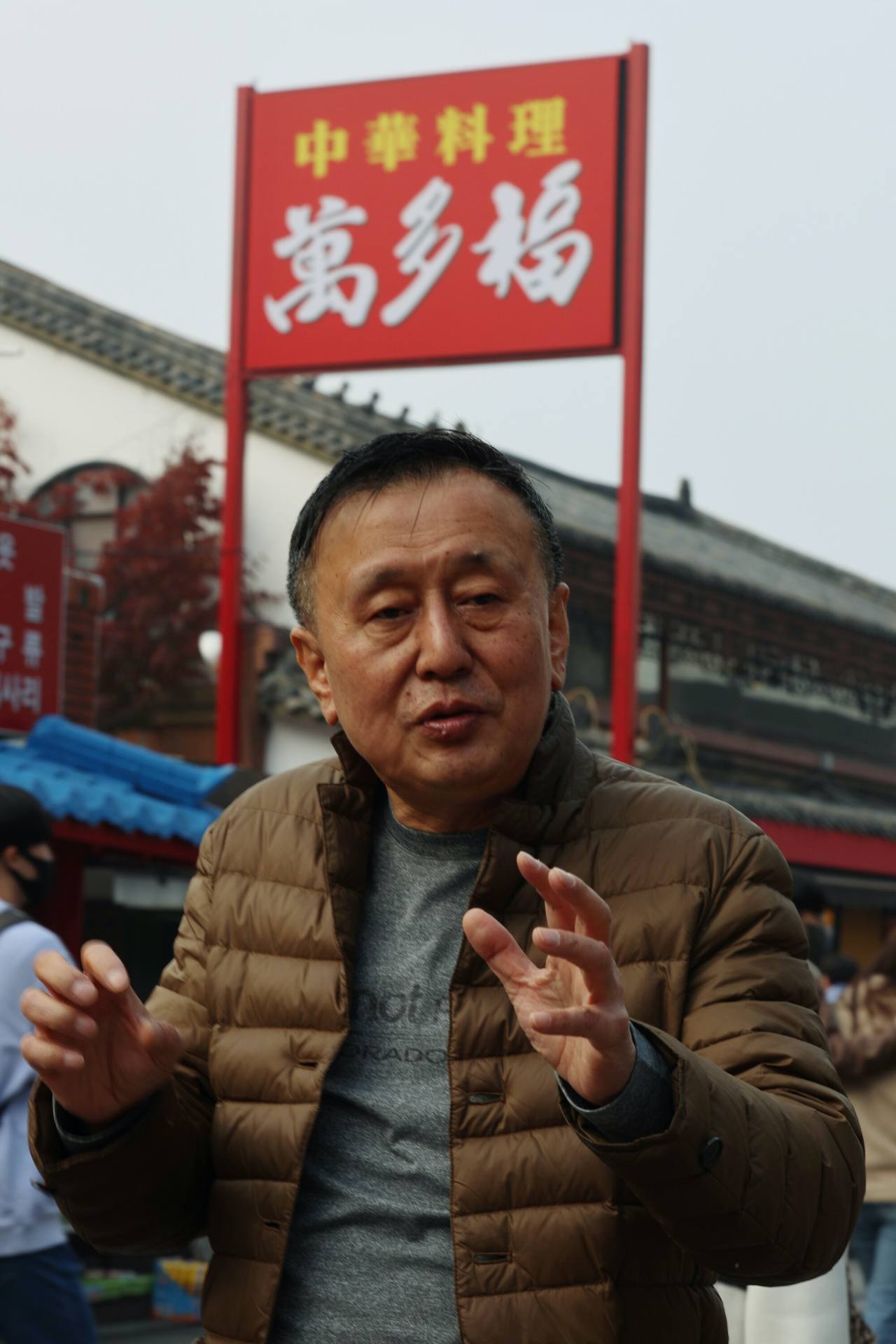 Seo Hak-bo, 62, is a restaurateur and second generation Chinese Korean, a descendant of an immigrant from Shandong province, China.Photo © Hyungwon Kang
The Japanese jogye was first to be established in 1883, linking banking and commerce back to the city of Nagasaki, which had closest trade relations with Korea.

The Qing dynasty’s Jogye followed in 1884 as neighboring nations competed for their interests in Korea. Citizens of countries such as the US, Germany, England, France and the surplus Japanese population in Korea shared an area called “joint settlement districts.“

The Qing jogye in Incheon, overlooked the waters of the West Sea, where overseas Chinese grew their own vegetables and started to do business in Korea.

Jjajangmyeon, the original Korean Chinese dish, was invented in Incheon by Qing dynasty migrant workers in Korea during the early 1900s, when both Qing and Japanese businesses were competing to establish roots in Korea.

“Chunjang, the black sauce for jjajangmyeon does not exist in Chinese cuisine outside of Korea” said Seo Hak-bo, a restaurateur and a second-generation Chinese Korean whose father was born in Shandong province, China, on the west side of the West Sea of Korea, also known as the Yellow Sea. 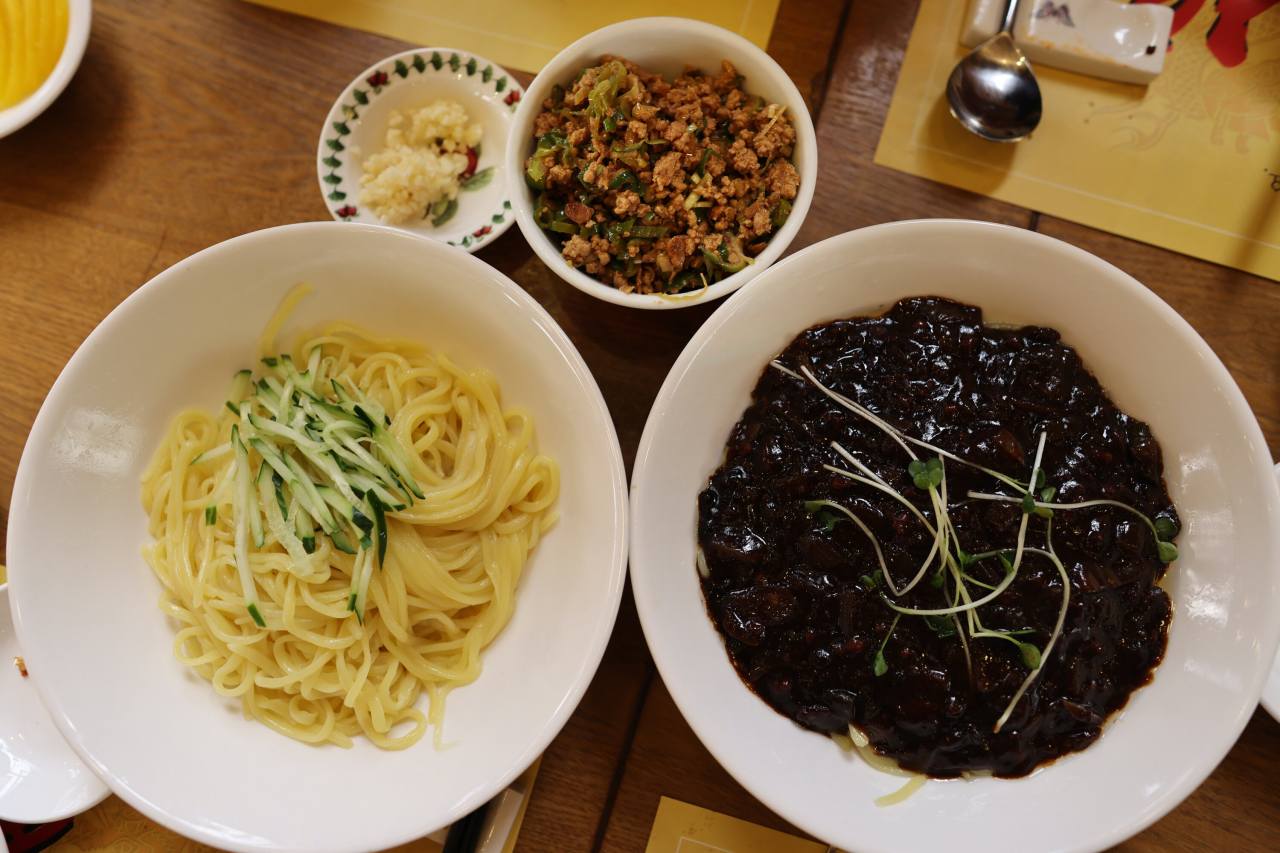 Chinese Korean restaurant’s marquis menu item, jjajangmyeon (right), is a uniquely Korean dish. It has been reinvented as “white Jjajangmyeon” on the left, by restaurateur Seo Hak-bo.Photo © Hyungwon Kang
“I’ve visited all of China researching Chinese cuisine and I can say that Shandong, Balhae Bay, Korea and all of the surrounding land around the West Sea cook with green onion and garlic, while the rest of China cooks with ginger,” said Seo.

Generations of Qing dynasty Hwagyo have settled in Korea but their nationality is as citizens of the Republic of China, Taiwan.

Over in the US, as the Qing dynasty migrant workers were building the western half of the Transcontinental Railroads in the US in the 1800s, kitchens were set up at labor camps along the path of the railroad construction, becoming the first American Chinese food restaurants, where Chinese dishes were made with locally available ingredients. 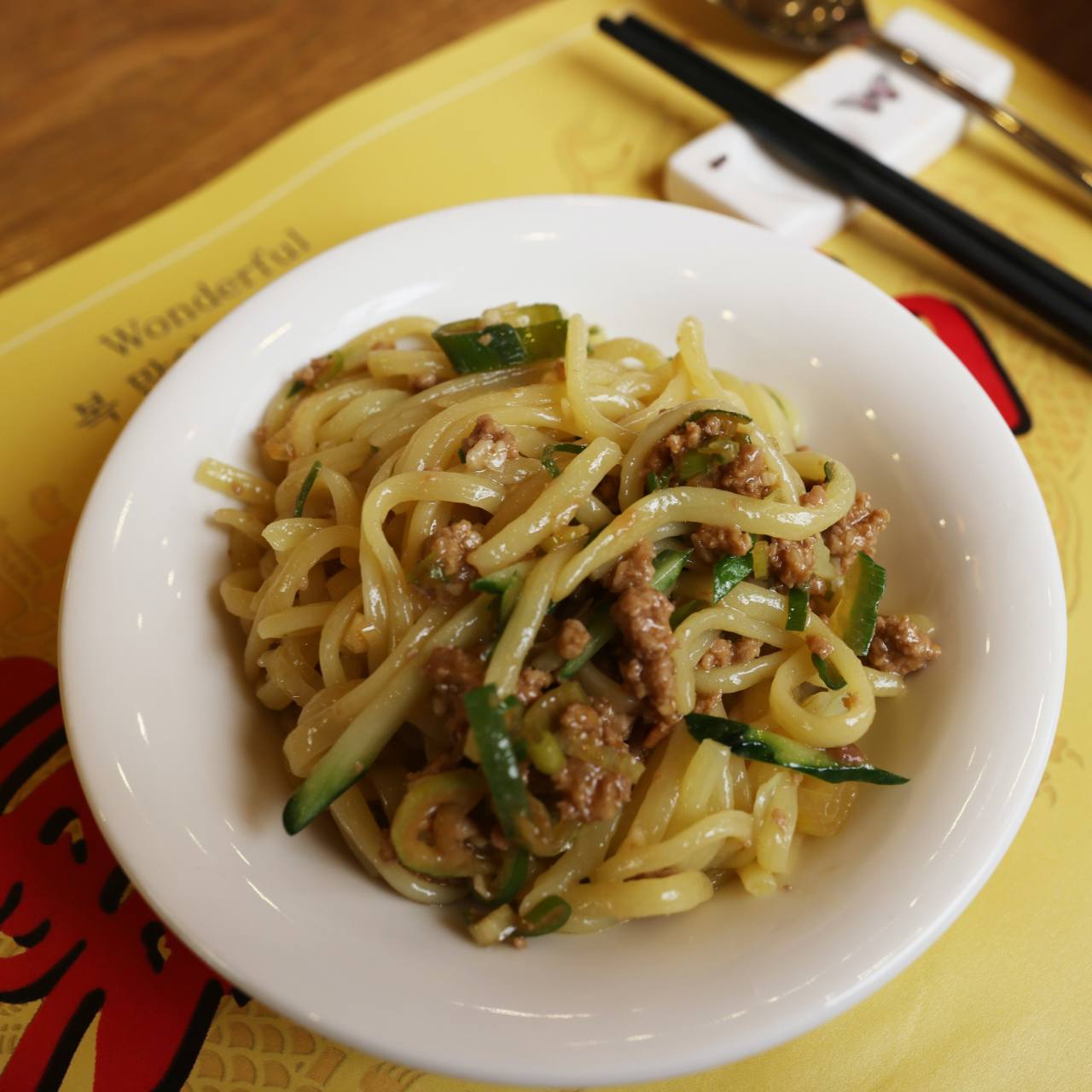 Jjajangmyeon, a uniquely Korean dish, has been reinvented as “white Jjajangmyeon” by restaurateur Seo Hak-bo. Photo © Hyungwon Kang
In the 20th century, Qing workers were mobilized in Korea to build railroads by the Japanese colonizers who needed railroads to transport soldiers and weapons to wage war in Manchuria.

A tragic massacre of overseas Chinese took place in Pyongyang and other cities in Korea in 1931 during Japanese occupation.

“Some 200 Chinese workers were killed as a result of false Extra News printed in July 1931 by Chosun Ilbo incorrectly reporting the killing of Korean farmers in Jilin province in northeast Manchuria by the Chinese,” said Yi of Incheon National University.

Hwagyo’s unique history leaves them with questions about their identity.

“In my 20s, I struggled with my identity. ‘Who am I?’ is an unending homework for all of us hwagyo. I thought I was Chinese in my 20s. So I went to attend college in Taiwan with the intention of not returning to Korea but I quickly realized Taiwan was not my home,” Seo said. 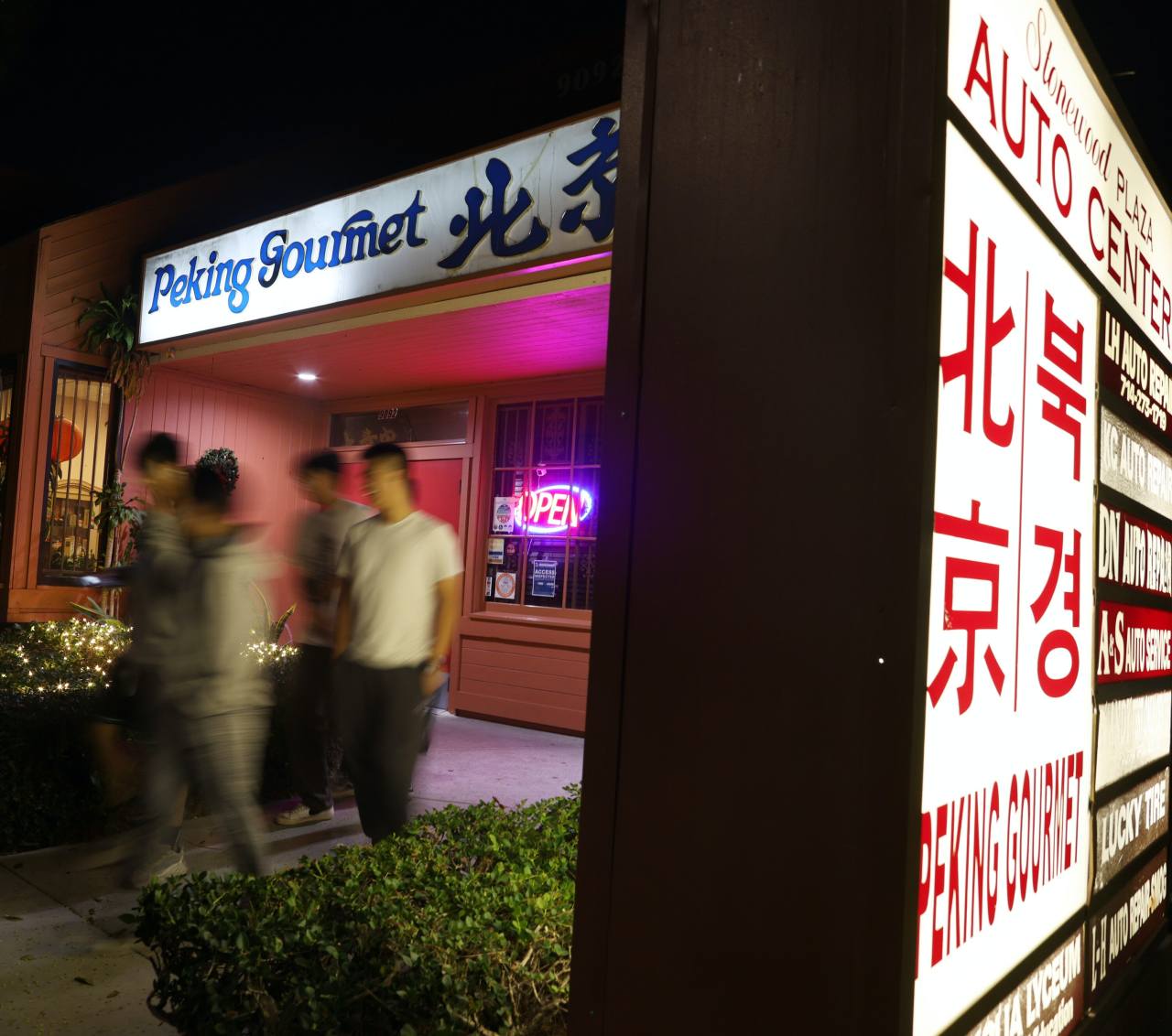 Chinese Korean restaurant Peking Gourmet in Garden Grove, California is run by second-generation Chinese Korean sisters who serve jjajangmyeon along with American Chinese food. Photo © Hyungwon Kang
“My blood is of Qing Chinese, but my flesh and bones are made of Korean rice, kimchi and makgeolli, the rice wine of Korea.” said Seo.

While Seo’s father Seo Yoo-gong lived most of his life in Korea as a first generation immigrant, he never learned to speak Korean fluently. Korean law prevented the elder Seo and other overseas Chinese from owning farmland beyond their residences and required them to renew their temporary residency in Korea every three years.

But when elder Seo was dying in Orange County, California while visiting his daughters who immigrated to the US, one of the last words the he said was, “I want to go home to Korea.”

The Seo siblings had their father’s body flown to Korea and buried their father next to their mother at a cemetery in Paju, Gyeonggi Province.