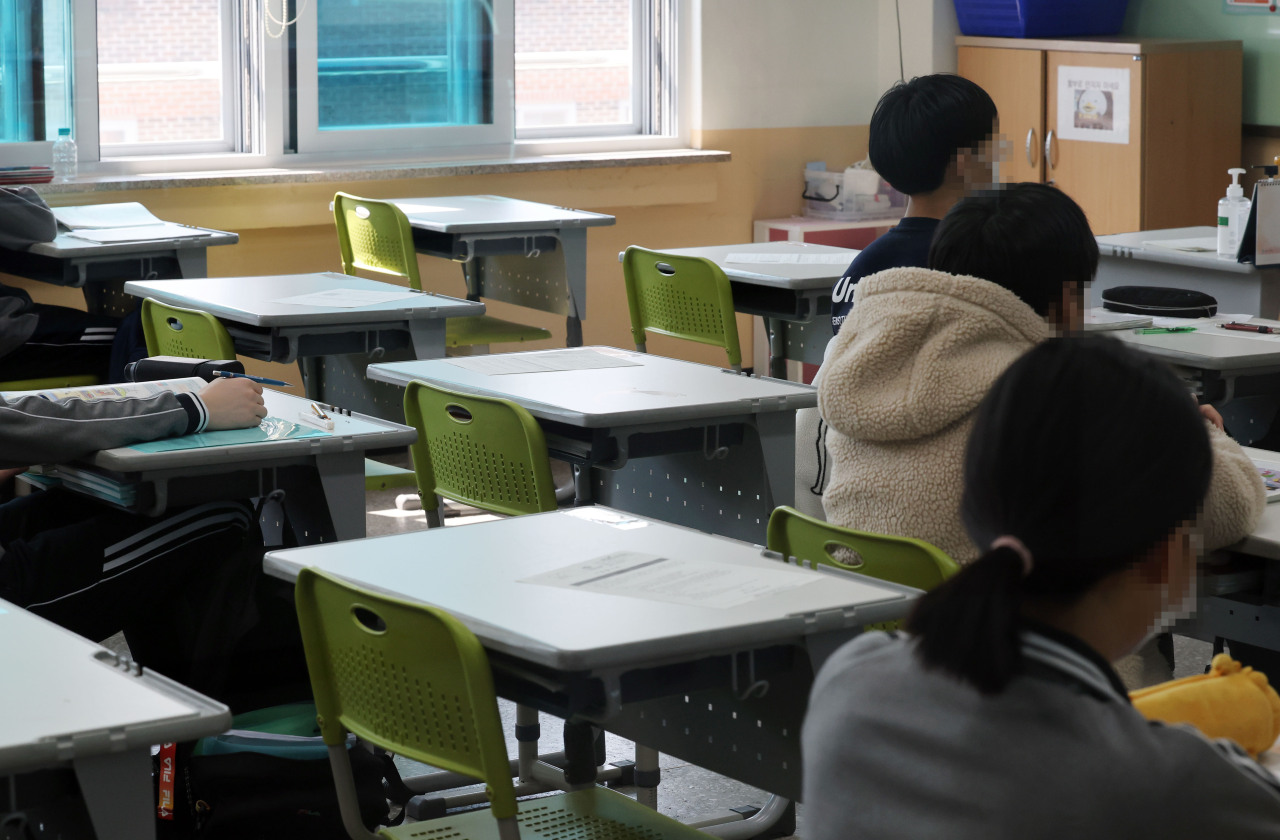 Some seats in a classroom at a middle school in Seoul are left empty Tuesday, with students staying home due to COVID-19. (Yonhap)
The ongoing COVID-19 surge in Korea is wreaking havoc on schools, leaving students, parents and teachers confused with quarantine protocols.

The Education Ministry said Wednesday that 379,983 kindergarteners, elementary, middle and high school students in Korea were confirmed of COVID-19 from March 15 to Monday. A total of 1.05 million students have tested positive since the new semester began earlier this month.

Even amid the virus crisis, more schools are continuing to hold in-person classes. As of Monday, students at 18,197 schools -- 89.5 percent of 20,326 schools across the nation -- are attending face-to-face classes every day. Some 1,982 schools have gone hybrid, while 119 schools held online-only classes.

“It is kind of scary to think that some of my classmates could be coming to classes though they are living with family members who have been confirmed of COVID-19,” said Choi Seong-ho, a middle school student based in northern Seoul.

The Education Ministry said students who live with someone who has been confirmed with an infection can attend classes regardless of their vaccination records. Though students are advised to stop attending classes in person until their polymerase chain reaction, or PCR, test results come out, schools cannot stop the students from attending classes as that is only a recommendation.

“I know that some do not report their family’s contagion to teachers because they do not want that kind of attention from other classmates,” Choi said.

“It is just too much. I have to take over classes for other confirmed teachers and also carry out duties related to infectious disease control and prevention. Even if students report the contagion of their family members, there is actually nothing I can do about it,” said an exasperated teacher in her early 30s who works at a school in southern Seoul.

The ministry said 32,117 faculty members were confirmed of COVID-19 in the past week.

“It’s not just about the teachers, too. Food service workers, janitors and other faculty members are being infected, making it impossible for schools to function normally,” said the teacher who asked to remain anonymous.

Some schools have reported cluster infections among food service workers. Left with no choice but to send students home early with the lunch service coming to a sudden halt, the burden is passed on to parents.

“Though I understand the school did not have a choice, this is frustrating for us. As many of my teammates have been confirmed for or isolated due to COVID-19, it is not easy to ask for time off all of a sudden,” said Kim Mi-kyeong, a working mom in her 40s.

Kim had to work from home earlier this month as her child’s school went into an online-only class routine due to a soaring number of infections in students.

“I was lucky to work from home. Some of my friends are quitting their jobs to care for children who are unable to attend classes normally,” she said. “I know that the virus state is unpredictable. But we are all so unprepared.”

The Education Ministry and education authorities, however, are continuing to push for a return to normal, which mean schools continue to run face-to-face classes unless infection numbers reach a certain threshold.

Education Minister Yoo Eun-hye said earlier this month that attendance guidelines are unlikely to change, as “compared to other facilities, schools have been safe with tight quarantine protocols.”

Authorities are going forward with the self-testing scheme, claiming it can prevent the spread of the virus at schools.

From April 18, students -- who have been testing themselves twice a week with self-testing kits -- will be advised to test themselves once a week to attend classes.

The Seoul education office has requested a revised supplementary budget of 50.6 billion won ($41.7 million) to the Seoul City Council to respond to the omicron wave.

“The omicron spread has been reflected at schools,” Seoul Metropolitan Office of Education Superintendent Cho Hee-yeon said at a press briefing Tuesday.

“It would be unlikely to stop the use of self-testing kits after April,” Cho said. “If the situation worsens, students may have to test themselves twice a week again.”