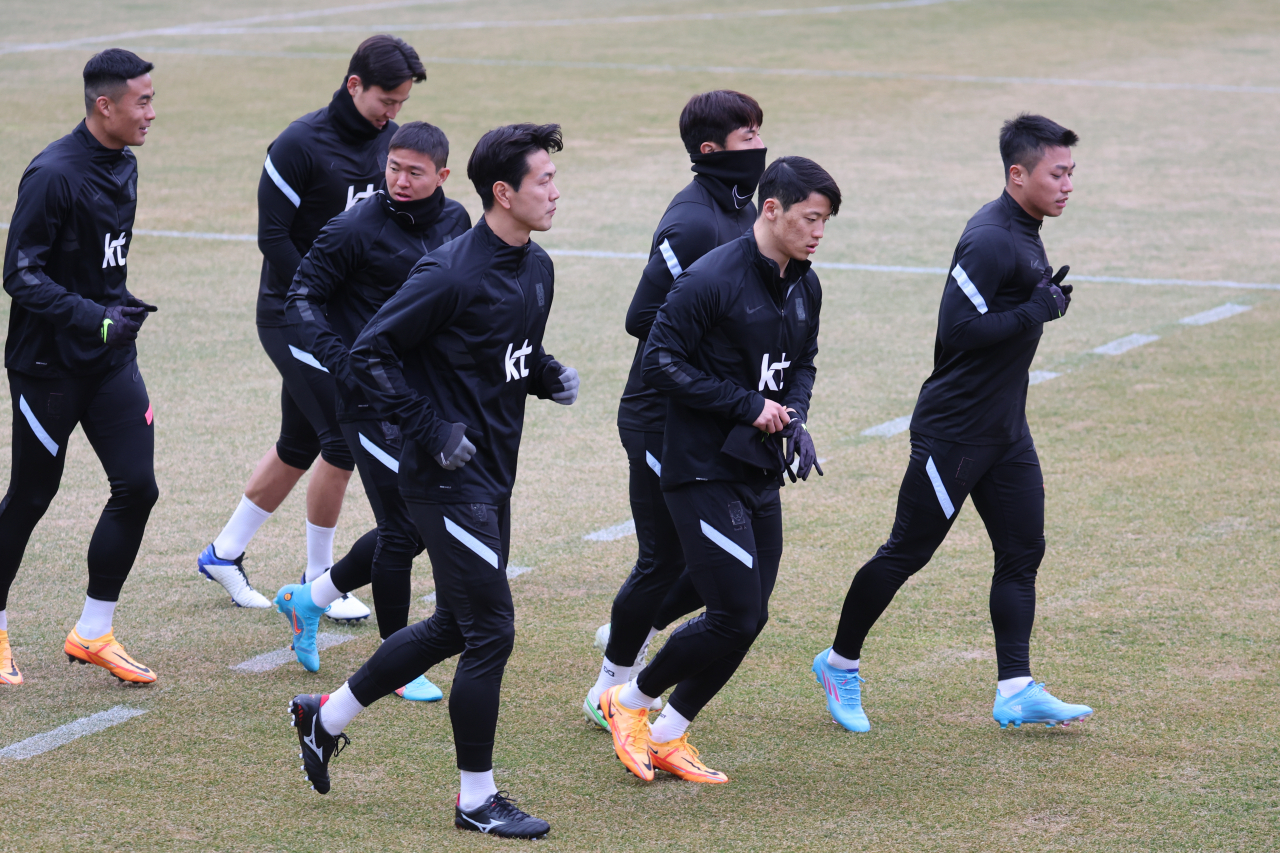 Members of the South Korean men's national football team train at the National Football Center in Paju, Gyeonggi Province, on Monday, in preparation for World Cup qualifying matches against Iran and the United Arab Emirates. (Yonhap)

The last time South Korea defeated Iran in men's football was so long ago that Son Heung-min, the current national team captain and a transcendent star, was a raw 18-year-old who remained glued to the bench. Park Ji-sung and Lee Young-pyo, two legends of the game long since retired, played the entire 120 minutes, as the teams needed an extra 30 minutes to determine the winner.

The 1-0 South Korean victory came in the quarterfinals of the Asian Football Confederation (AFC) Asian Cup in January 2011. The two Asian foes have faced each other seven times since then, and Iran won the first four of those games, all of them by 1-0, before playing South Korea to three consecutive draws. Overall, South Korea have managed just nine wins against 10 draws and 13 losses versus Iran.

South Korea will take another crack at getting the better of Iran on Thursday, when they host Iran in Seoul during the final round of the Asian World Cup qualifying campaign.

The match at Seoul World Cup Stadium will kick off at 8 p.m.

Both South Korea and Iran have secured their tickets to the 2022 FIFA World Cup in Qatar, as the two best teams in Group A. At stake: first place in the group and regional bragging rights.

Iran are leading the way with 22 points from seven wins and a draw. South Korea sit two points back with six wins and two draws. They are the only two undefeated nations in the group.

Only the top two teams from the group grab automatic berths for the World Cup and both Iran and South Korea locked down theirs with time to spare. Thursday's match will be the penultimate qualifier for both. South Korea will close out the phase against the United Arab Emirates in Dubai next Tuesday, while Iran will host Lebanon on the same day.

Winning the group should help South Korea improve their world ranking positions. They are currently 29th, eight behind Iran for the top spot out of Asia, with Japan sandwiched between them at No. 23.

In the two teams' most recent meeting in October last year, Son gave South Korea a 1-0 lead early in the second half, only to see his side blow the lead in the 76th minute.

Bento will once again turn to his trusted captain for an offensive spark. Son scored twice in his most recent Premier League match, a 3-1 win over West Ham United on Sunday, for his first multigoal effort of the season.

Forward Hwang Ui-jo will also have to rediscover his scoring touch, having last scored for South Korea in June 2021, eight matches ago. It's Hwang's longest drought since becoming a national team mainstay on Bento's watch in the fall of 2018.

On defense, veteran center back Kim Young-gwon will be playing with a yellow card, with the next caution resulting in an automatic suspension for the next match. Bento selected a couple of international neophytes, Suwon FC's Park Min-gyu and Seoul E-Land's Lee Jae-ik, as potential alternatives on defense. Bento has often called up young and unproven players at other positions but not ended up putting them into matches, instead choosing to see those players in training with veterans or, as Bento likes to put it, "within the national team context."

Iran lead Group A with 13 goals scored, followed by South Korea with 11. They are tied for the fewest goals allowed with two apiece.

Both teams have been hit hard by COVID-19, with Iran having been dealt a bigger blow with their leading scorers, Mehdi Taremi of FC Porto and Alireza Jahanbakhsh of Feyenoord, both on the mend. These two have combined for seven of Iran's 13 goals.

South Korea have replaced four players due to COVID-19 infections, though none would have been considered for a starting role against Iran. Jeonbuk Hyundai Motors midfielder Paik Seung-ho became the latest victim Tuesday. (Yonhap)