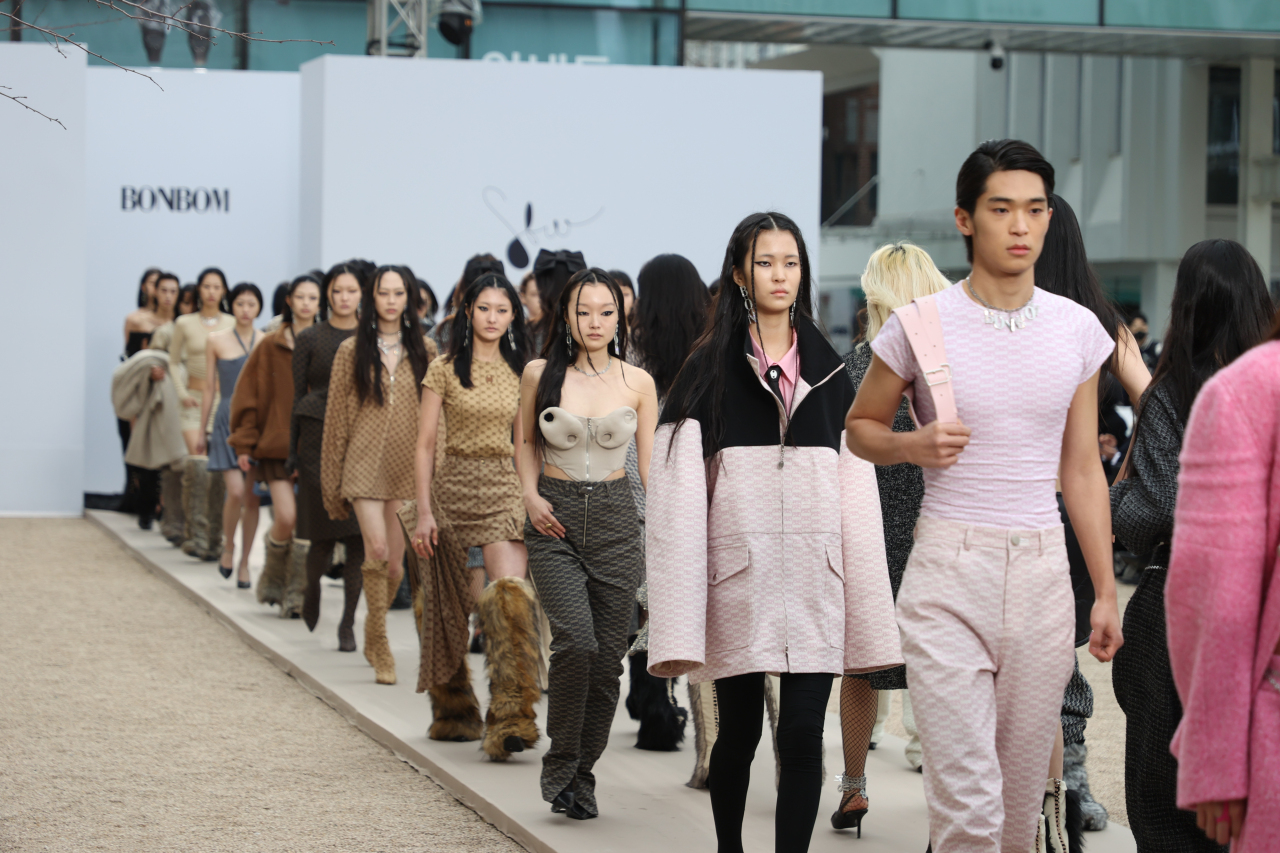 The opening ceremony of 2022 fall-winter Seoul Fashion Week took place at the Seoul Museum of Craft Art in central Seoul and about 150 people -- including Seoul Mayor Oh Se-hoon, big-name celebrities and buyers – were in attendance.

“I hope, K-fashion, which has already been introduced in London and Paris, continues to make a foray into New York and Milan Fashion Weeks and I hope Seoul becomes one of the top five fashion cities in the near future,” Oh said. “We believe K-fashion will play a reliable role along with K-pop, K-drama, K-food and K-style to help Seoul achieve its position as the benchmarked city of global lifestyle.“ 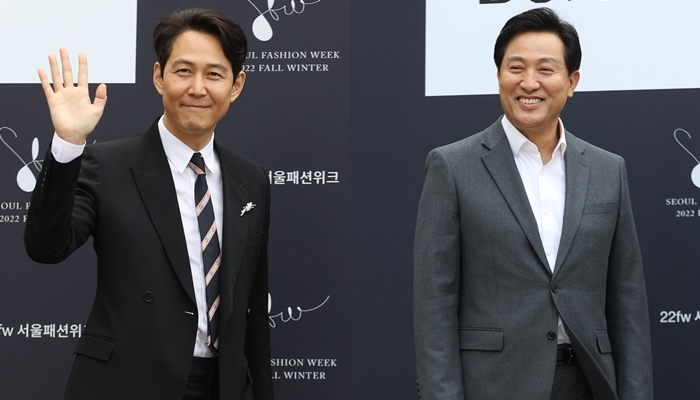 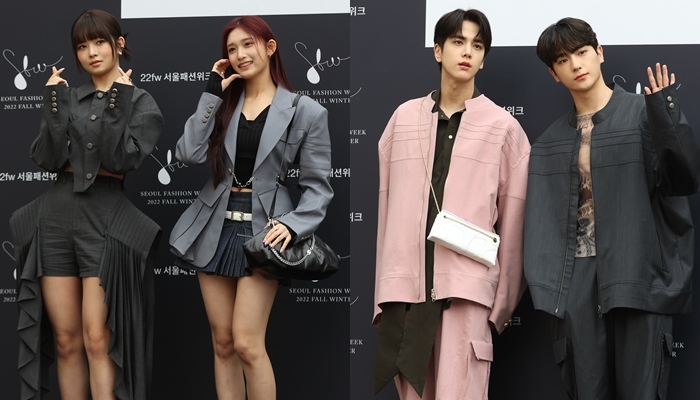 From left: IVE's Rei and Leeseo and The Boyz' Younghoon and Hyunjae pose for photos at Seoul Fashion Week held at the Seoul Museum of Craft Art in central Seoul on Friday. (Yonhap)
Of the many big names in attendance, actor Lee Jung-jae of Netflix’s smash hit ”Squid Game“ shined as the event’s global ambassador.

Other celebrities that sat along the catwalk were girl group IVE’s Leeseo and Rei, boy band The Boyz, TVXQ‘s Changmin and dancers Jo Na-in and Noh Won, who were featured on Mnet’s hit dance competition show “Street Dance Girls Fighter” in the fall of last year. Dozens of fans flocked to the venue to take photos of the stars despite the chilly weather.

Designer brand Bonbom was the first of three labels to present its collection. The collection, titled “This is the Way That We Love Like It’s Forever,” marked the brand’s Seoul Fashion Week debut. 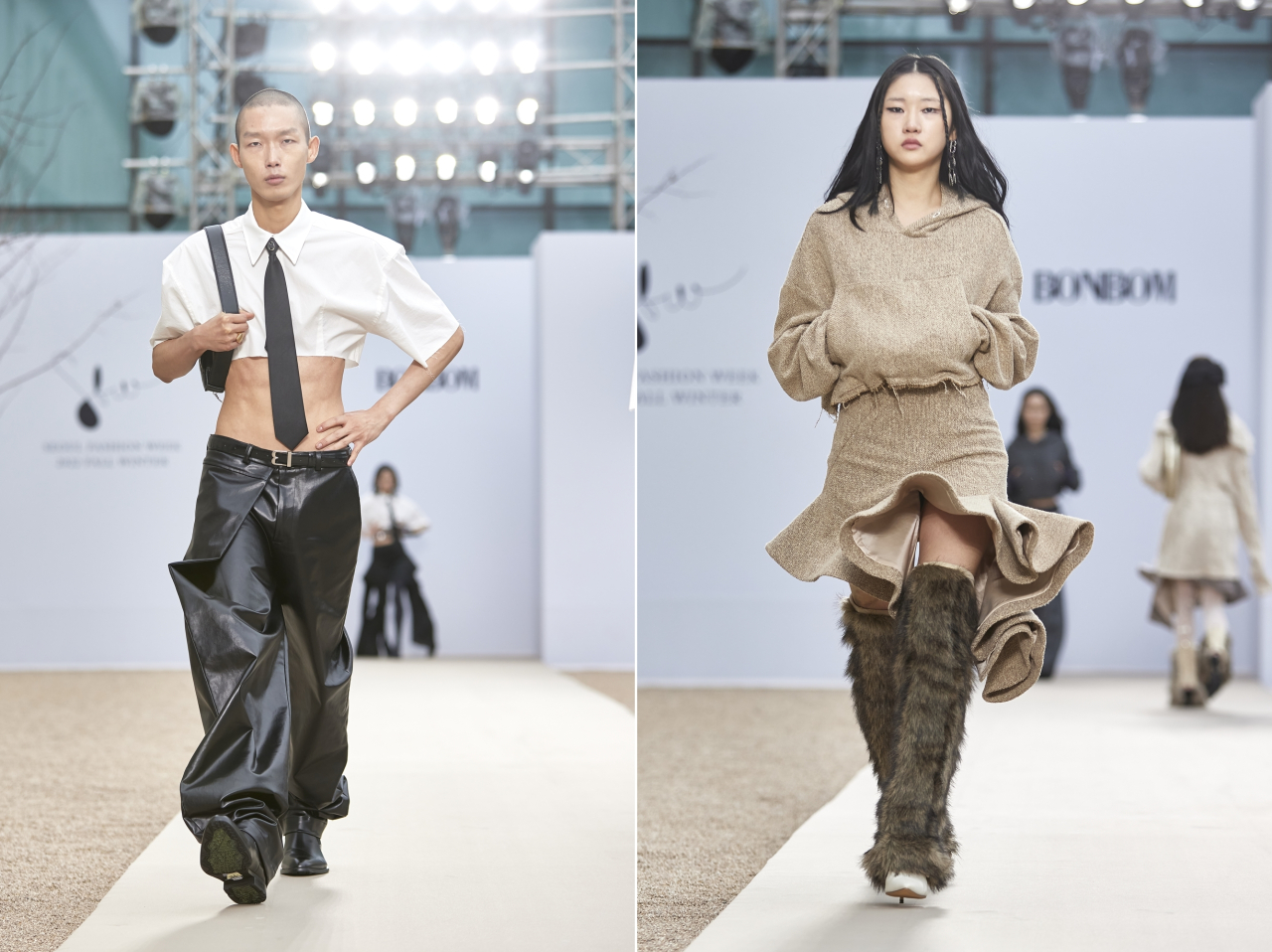 Looks from Bonbom’s 2022 fall-winter collection are presented at Seoul Fashion Week held at the Seoul Museum of Craft Art in central Seoul on Friday. (Seoul Fashion Week)
Bonbom’s winter collection was inspired by the zoot suit, a popular style trend in the US in the 1930s, and Japanese sukeban fashion from the 1970s. The brand reinterpreted rebellion and freedom into a futuristic and sensual teenage school look.

It was followed by C-Zann E’s runway show titled “Movement & Freedom,” which was inspired by “Dancing Boy” from Korean folk painting master Kim Hong-do from the Joseon era (1392-1910).

C-Zann E’s collection delivered the message of timeless freedom through its Korean avant-garde designs to reveal authenticity of Korean beauty.

A live performance of taepyeongso, the Korean double-reed wind instrument in the shawm or oboe family, and energetic gestures of dancers who highlighted their long-sleeved clothes made the show even fuller.

The final collection to take the runway was from the brand Beyond Closet. The show was titled “My Palette.” Inspired by the documentary film “The Price of Everything,” it focused on mixing different colors, materials and details. It highlighted novelty that is familiar and comfortable but still very new.

In addition to the three collections that were showed live, prerecorded shows from three brands -- Seokwoon Yoon, Painters and Eenk -- were also streamed online through YouTube, Naver TV and TikTok on the same day. 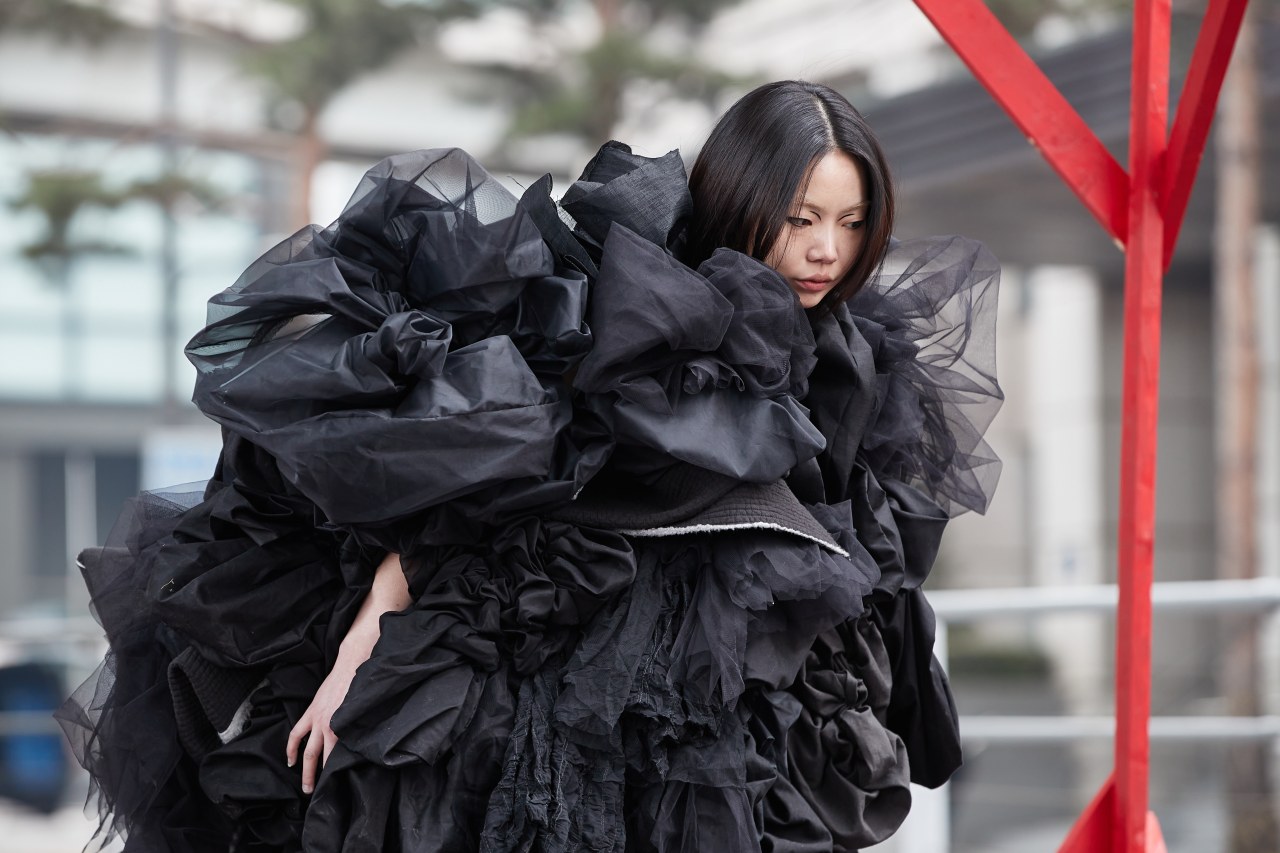 A scene from the prerecorded film of Painter’s 2022 fall-winter collection at Seoul Fashion Week (Seoul Fashion Week)
The Seokwoon Yoon show, which took place during London Fashion Week, introduced this year’s A/W collection under the theme of “Approaching a New Species.” Rookie womenswear brand Painters showed experimental visuals through its collection, hoping it to be accepted in the commercial market. Eenk presented its “V for Vintage” collection filled with powerful elegance and majestic glam inspired by the issues of Vogue magazine from the 1980’s. The brand was invited to Paris Fashion Week earlier this year.

The biannual fashion event will also hold an on-site exhibition where visitors will be able to try on some of the items from designer brands that are being showcased in the runway shows and buy them at discounted prices. The exhibition runs through the end of May at Han Collection in central Seoul.