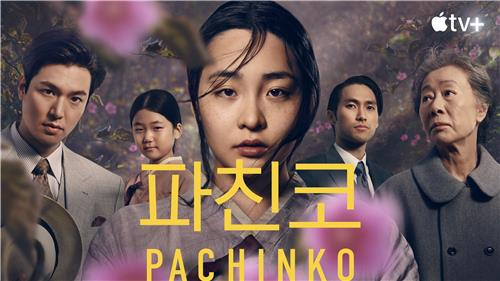 A teaser poster of "Pachinko" by Apple TV+(Apple TV+)

A co-director of the upcoming period drama "Pachinko" said Friday the show is specifically about a Korean family moving to Japan in the 20th century, but it also tells a timelessly universal story of immigrants throughout the world.

Based on the namesake novel written by Korean American author Min Jin Lee, the latest Apple TV+ original series depicts the life of Sunja, born to a poor family in Busan in the early 1900s. The 1910-1945 Japanese colonial rule forces her to move to Japan, and she and her family have to go through a tough life there even after the Second World War.

The series is one of the most anticipated projects for its multinational production in Canada, South Korea and Japan; the all-star cast, including Oscar-winning Youn Yuh-jung; and another story about Koreans from the past made by Korean American creators following the 2020 immigrant film "Minari."

"I think this story is specific to Korean history, but it is also deeply universal," Kogonada, who co-directed the eight-part series with Justin Chon, said in an online interview with Korean media from Los Angeles.

"Even today, we know that people are being displaced, and families are having to make choices on how to survive. And this is a common story throughout history," he said. "So we knew that this would be a story for everyone, because it's ongoing quest for perseverance and endurance as a family."

Kogonada said he was amazed by Youn's performance in "Pachinko," where she plays Sunja in her 80s, who lives in Japan as a Zainichi, a Japanese word for ethnic Koreans who have permanent residency status in Japan but don't have Japanese passports.

"Her face to me was like a map of human history and Korean history, and the notes that she can play on her face are really remarkable to me," he said. "After every scene, I just wanted one more scene of her in front of our lens because she has that ability to play the most subtle notes. It's captivating."

Youn said she newly learned about the history of Zainichi Koreans through the project, representing the painful history of Korea, which did not dare to look after those immigrants as it experienced the Korean War a few years after the liberation in 1945.

"I tried to express the long period of time that those people have endured. I learned a lot about history," she said. "I hope the Korean audience feels this part through 'Pachinko.'"

The 74-year-old actress added her Sunja in "Pachinko" is quite different from her role of Soonja in "Minari," a livewire grandmother who visits her immigrant daughter living in America in the early 1980s, in terms of the time and the place.

"This story will impress all people regardless of their nationality and language," he said. "I hope this show will resonate with many people."

The first three episodes of "Pachinko" will premiere next Friday, and the remaining five episodes will be released one by one every subsequent Friday. (Yonhap)