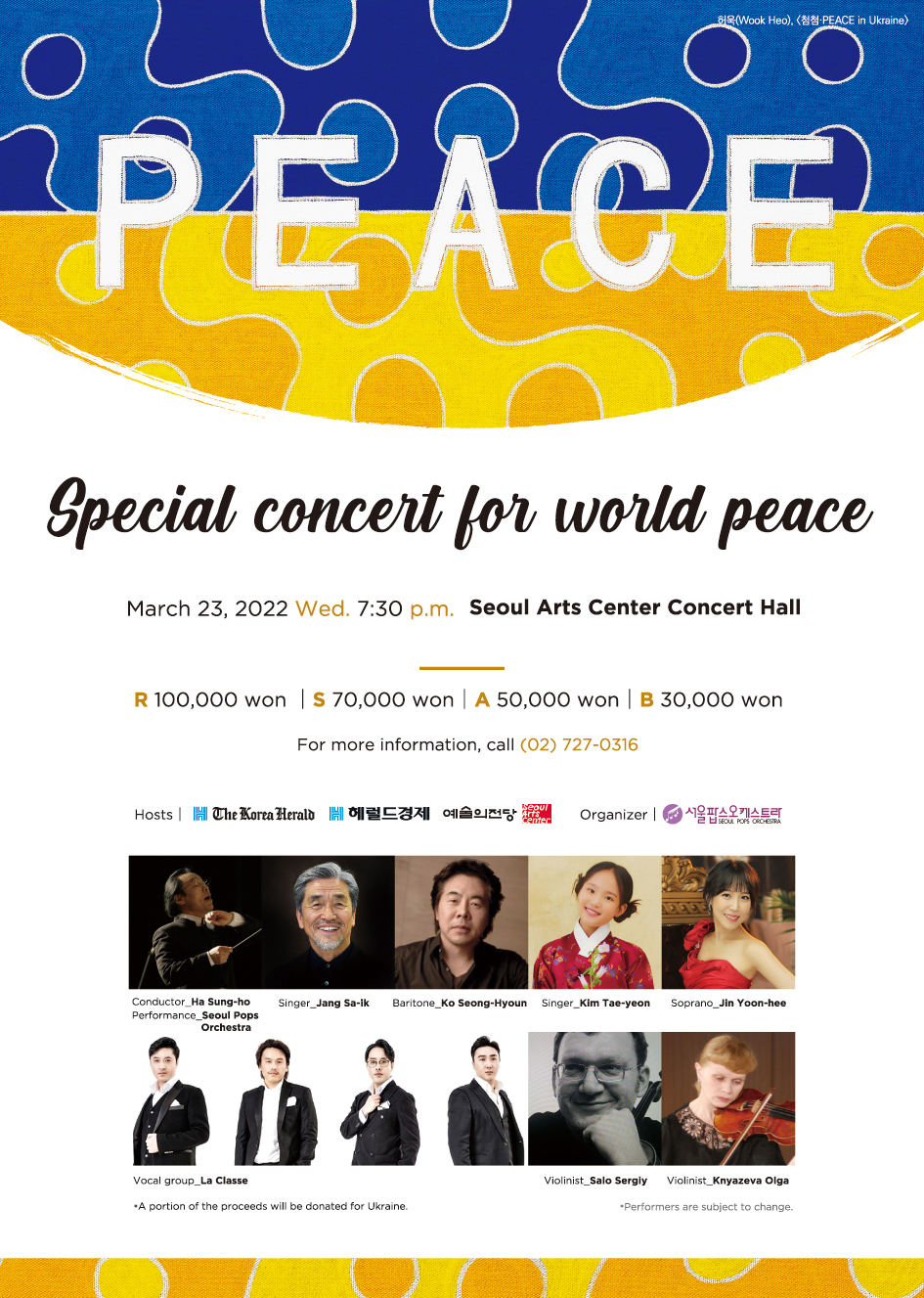 Poster for “2022 Special Concert for World Peace” (The Korea Herald/ Seoul Pops Orchestra)
In hopes of sending out a message of peace across the globe for Ukrainian war refugees, a special evening concert will be held at the Seoul Arts Center’s concert hall on March 23.

Co-hosted by The Korea Herald and the Seoul Arts Center, the “2022 Special Concert for World Peace,” will be led by the Seoul Pops Orchestra’s director and conductor Ha Sung-ho.

The main image for the concert was designed and provided by the artist Heo Wook. Heo took the colors from the national flag of Ukraine to symbolize a yearning for peace.

Seoul Pops Orchestra was founded in 1988, and has captured the attention of not only classical art enthusiasts, but also a wide range of audiences through its unique performances that intersect musical genres ranging from classical music, jazz, pop music and film scores.

Twenty of its 72 members are foreign musicians, and among them are four Ukrainians and eight Russians. One of the Ukrainian members who joined the orchestra as early as 2002 has recently left South Korea to take part in fighting for his home country.

The 70-year-old conductor Ha expressed devastation and concern for the departed member, hoping that he stays safe under the circumstances.

Opening the performance with “Korea Fantasia,” Ha’s self-composed tribute music in 2019 to mark the centennial anniversary of the March 1st Independence Movement, the performance proceeds with some of the most beloved Korean modern pop songs and ballads of all time, as well as western pop music.

The orchestra’s own variations of Antonio Vivaldi’s “Winter” and “Spring” arrangements from “The Four Seasons” will be performed to wish for the world’s peaceful coexistence.

The second half of the concert’s highlight includes a duet performance of the two SPO violinists from Ukraine and Russia, Salo Sergiy and Knyazeva Olga. Ambassadors of neighboring countries and media influencers will be attending the event as guests.

“War is an atrocity against humanity that destroys civilization and human dignity,” said Choi Jin-young, CEO of The Korea Herald. “We prepared this concert to convey a message of peace to the world through music, and to send out hope and courage from South Korea to the Ukrainian people. Our hearts yearn for spring to soon unfurl in the world.”

The concert starts at 7:30 p.m. and the estimated running time is 90 minutes. Tickets range from 30,000 won to 100,000 won. A portion of the proceeds will be donated to the people of Ukraine. Ticket reservations can be made at tickets.interpark.com/goods/22002956.

The recorded version of the concert will be available through terrestrial broadcaster KBS 1TV, a week after the event.