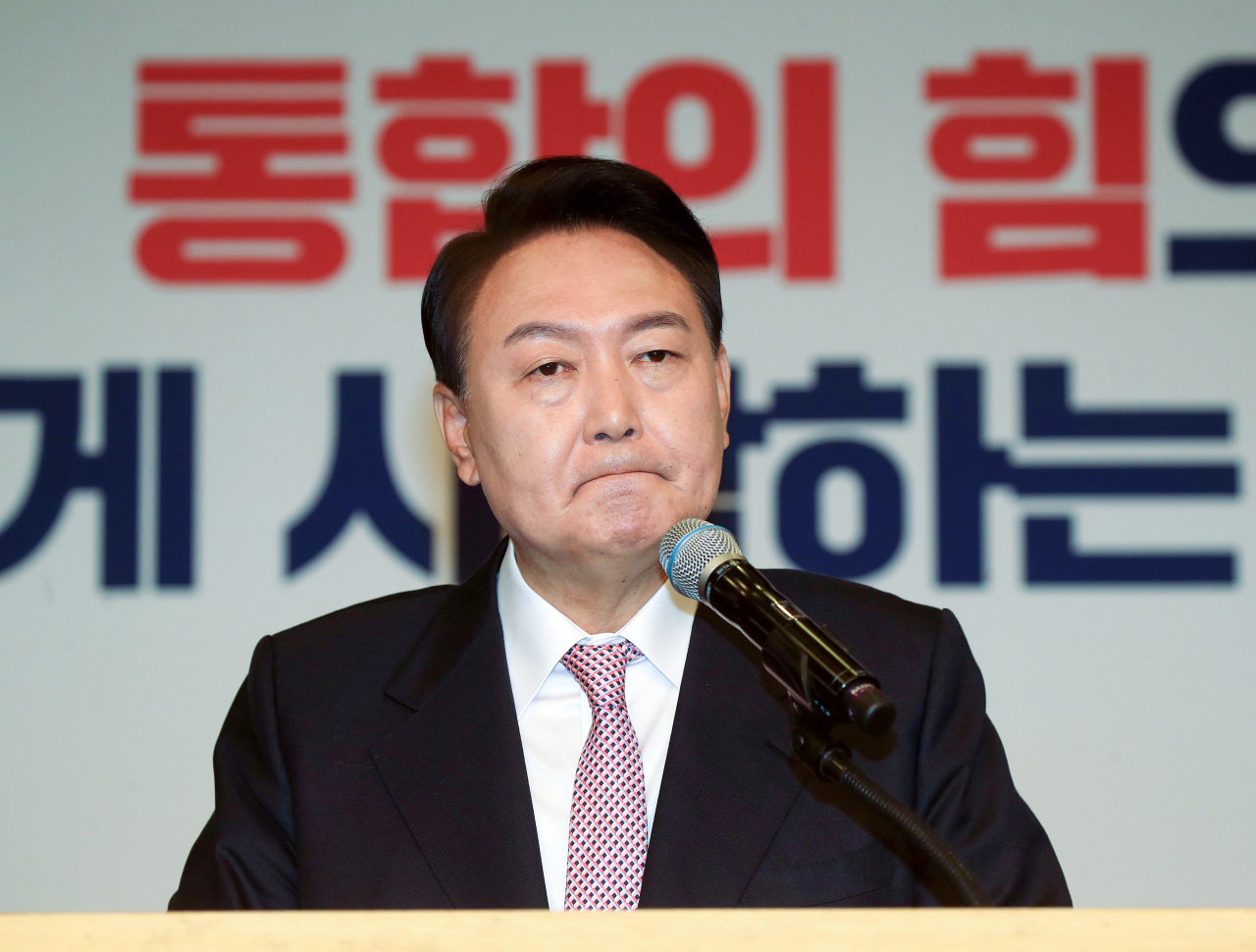 President-elect Yoon Suk-yeol speaks during a press conference at the National Assembly in Seoul on Thursday. (Yonhap)
President-elect Yoon Suk-yeol’s improbable run to the highest seat of South Korean leadership was littered with controversy, scandal and bad decision-making, both on his own part and that of his main rival from the ruling Democratic Party of Korea, Lee Jae-myung, and the tumultuous journey is reflected in the fluctuating polls from Gallup Korea along the way.

Yoon, who was until a year ago the country’s chief prosecutor appointed by the incumbent Moon Jae-in administration, declared his bid for the presidency on June 29. The following month, he garnered 25 percent of support in a Gallup survey, slightly ahead of then-Gyeonggi Province governor and would-be archrival Lee.

November marked the first time he acquired a sizable lead over Lee in terms of support -- 42 percent to 31 percent.

Then, in the final weeks of the campaign, the race came down to a dead heat between Yoon and Lee.

After Yoon took the lead in the aforementioned November poll, he maintained a lead or held onto a tie for the next couple of months. In early January, however, Lee came out on top, leading Yoon 36 percent to 26 percent. This was when a scandal related to future first lady Kim Kun-hee rose to the surface, and also after Yoon made the controversial comment that “poor, uneducated people do not know, and cannot feel the necessity of freedom.”

Suspicions surrounding Kim included one that she fabricated her credentials and plagiarized her doctoral dissertation at Kookmin University. The plagiarism accusation is currently under investigation by the school and the fabricated credentials turned out to be true, as Kim herself issued a public apology on the matter. 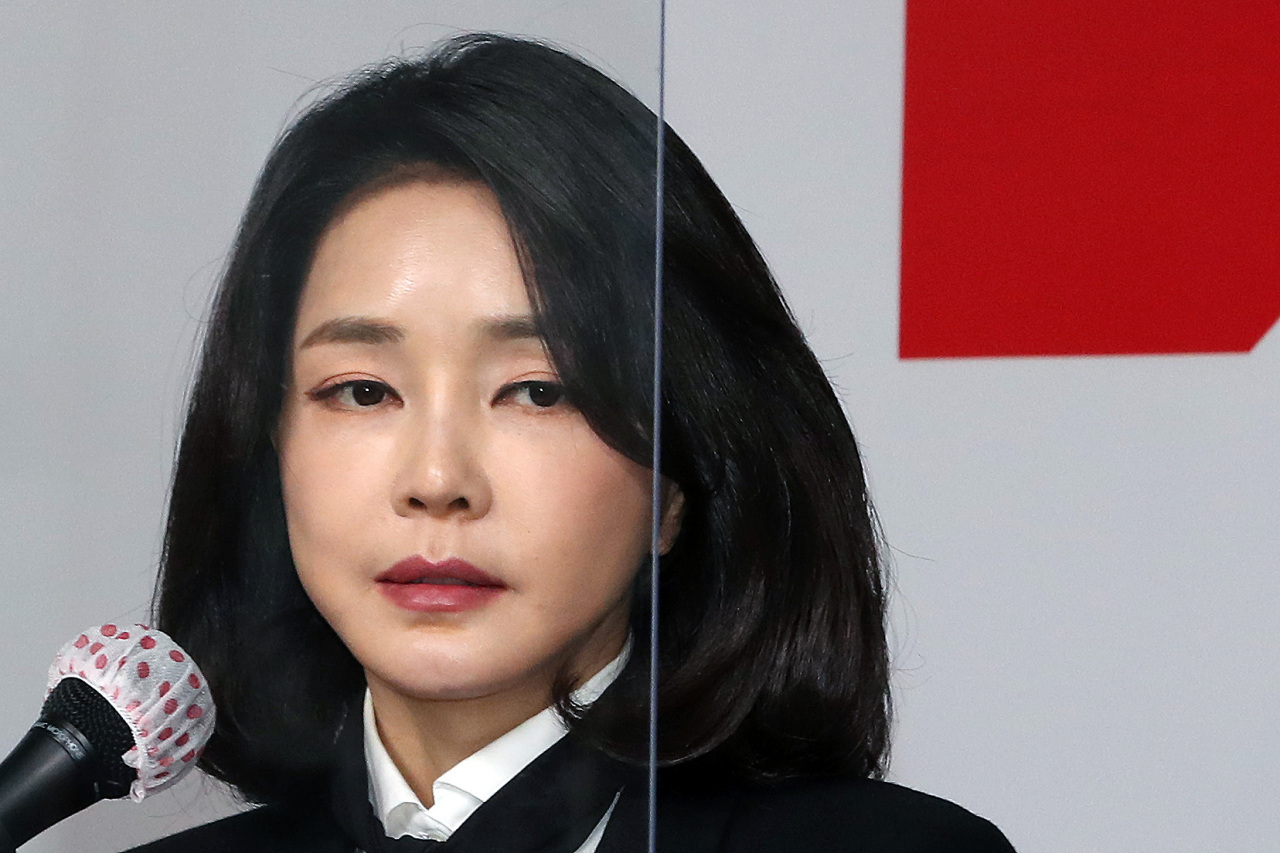 Kim Kun-hee, wife of the main opposition People Power Party’s presidential candidate Yoon Seok-youl, apologizes on Dec. 26 for falsely reporting her work experience. (Yonhap)
But just when Lee’s lead seemed all but certain, a scandal surrounding his own wife Kim Hye-kyung surfaced on Jan. 28, when a media report revealed Kim had relied on public servants for her personal errands and used credit cards meant for public officials. The scandal grew with the revelation that Lee and his family had used an official state car for personal benefit, and Kim had hired a personal driver for that car who was compensated out of the government budget.

Like Yoon’s wife, she also issued a public apology without elaborating on exactly which portion of the accusations were true.

In what had rapidly become a race to pick the lesser of two evils, ratings for Ahn Cheol-soo of the minor People’s Party grew to a campaign-high of 15 percent in a Jan. 6 poll.

Although Ahn would eventually drop out of the race, he would play a crucial part in the course of the presidential election.

But Yoon had one last surge left in the tank after the survey blackout: the realization of a prolonged deal to merge campaigns with his conservative rival Ahn.

Ahn became a major player after polls started showing slumping support for Yoon. Ahn had maintained that he would finish the race, with boosted morale from his own ratings that had risen into the double digits.

But a Feb. 17 poll -- the last time Yoon held a comfortable lead over Lee with 41 percent to 34 percent -- showed that his support kept shrinking, down two percentage points from the week before to 11 percent.

Ahn on Feb. 13 first reached out to Yoon to unify their campaigns, but the negotiations fell through with both parties blaming the other.

Ballots were printed and the two conservatives both took part in the TV broadcast of the last presidential debate on March 2. But things took a dramatic turn the very next day when the two met to agree on a merger, just a day before early voting began. 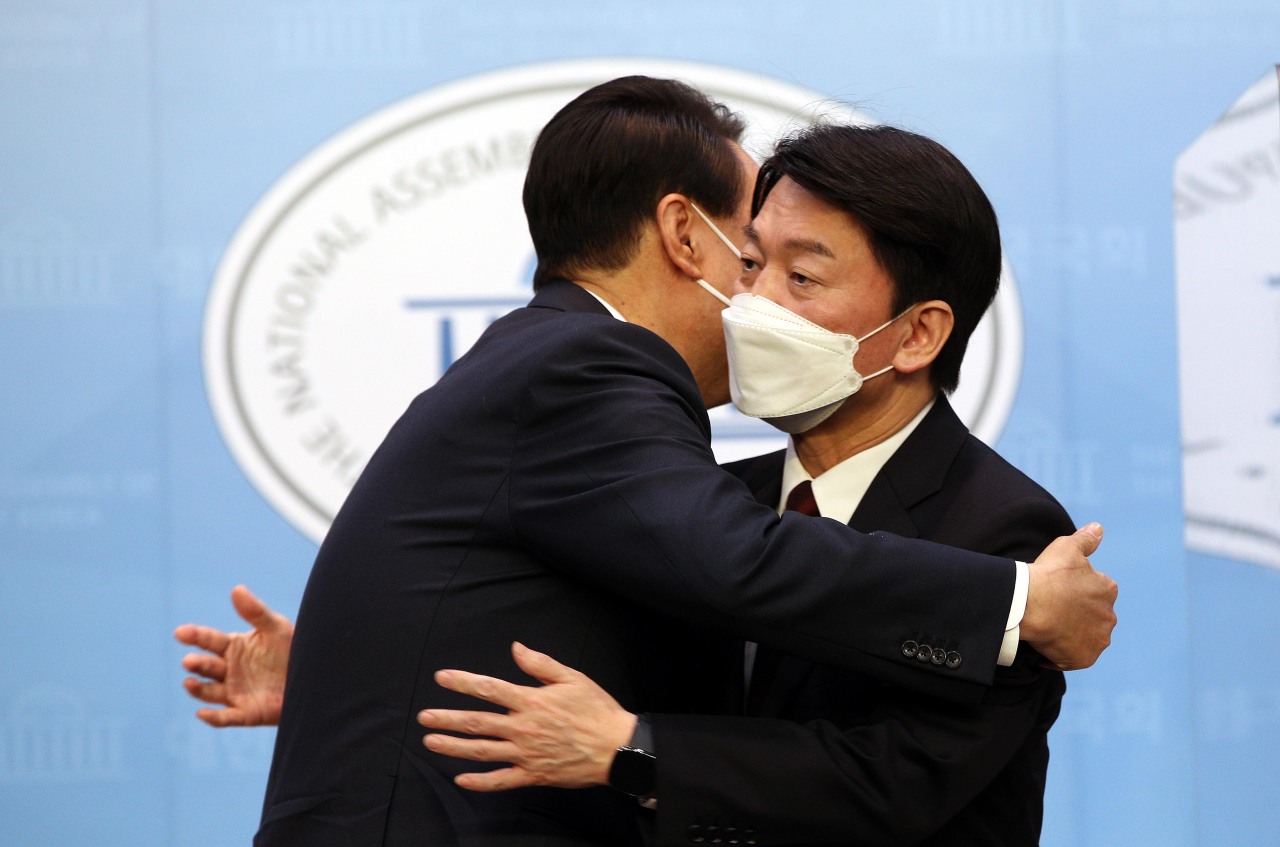 Yoon Suk-yeol (left) and Ahn Cheol-soo (Yonhap)
It is unclear exactly how big of a factor Ahn was in Yoon’s campaign, but People Power Party camp officials were optimistic as the nation went to polls, predicting an easy victory with as high a margin as 10 percentage points.

The optimistic expectations of Yoon’s camp were shattered when the exit polls jointly conducted by major broadcasting stations KBS, MBC and SBS projected an extremely close race of Yoon at 48.4 percent and Lee at 47.8 percent, invoking an eerie silence and scattered murmurs among camp officials. An independent exit poll conducted by JTBC even showed Lee leading 48.4 percent to Yoon’s 47.7 percent.

In the early hours of vote counting, Lee maintained a lead by nearly as much as 10 percentage points. But deeper into the night, the lead began to narrow.

It was just past midnight when Yoon finally overtook Lee. He went on to win 48.6 percent of the votes, against Lee’s 47.8 percent, grabbing the victory by the smallest margin in South Korean presidential election history. In the end, the final result was nearly identical to what the KBS, MBC and SBS exit polls had predicted.

Each of the candidates did well, as expected, in regions that traditionally supported their parties.

Both Gyeongsang provinces, Busan, Ulsan and Daegu once again proved to be loyal supporters of the conservative bloc, while Gwangju and the Jeolla provinces threw themselves beyond the liberal candidate. The Chungcheong provinces and Gangwon Province, considered moderately conservative, also went to Yoon.

Lee did edge out Yoon slightly in the swing regions of Greater Seoul -- Seoul, Incheon and Gyeonggi Province -- roughly 8.3 million to 8.1 million, but the population gap between the Gyeongsang and Jeolla provinces played in Yoon’s favor.

An interesting turnout was the result of Seoul, which Yoon took 50.6 percent to 45.7 percent. Yoon took leads of 67, 65.1 and 56.8 percent in the affluent Gangnam-gu, Seocho-gu and Songpa-gu, respectively. These are also the regions with the most expensive apartments in the city, with apartments in the 14 districts south of the Han River selling in January this year for an average of 1.5 billion won ($1.22 million), while 11 Seoul districts north of the river sold for an average of 998 million won, according to KB Real Estate.

This was a reminder of the public’s complaints against incumbent leader Moon Jae-in’s real estate policy. A KBS survey of 4,195 voters on the day of the election showed that 71.6 percent of voters considered real estate issues when choosing who to vote for.

While support for the two candidates was evenly distributed among genders in the aforementioned age groups, 20-somethings were drastically divided with 58.7 percent of young men voting for Yoon and 58 percent of their female counterparts voting for Lee.

It was a direct result of Yoon’s strategy of targeting 20-something male voters, many of whom have felt left out by the Moon administration’s policies that have been labeled as “feminism.” Yoon even pledged to abolish the Ministry of Gender Equality and Family, which Yoon described as producing “unfair policies that favor women.”

Yoon’s anti-feminist path was shown clearer than ever when he adamantly claimed to have been misquoted in a written interview with the Washington Post, in which he was quoted as saying, “I consider myself a feminist.” Yoon retracted the statement, with his camp blaming an “administrative error.”

His blatant anti-feminist ways resulted in young women throwing their weight behind Lee, although their anger ultimately fell short of overthrowing a man who claimed to not be a feminist on the same date as International Women’s Day.