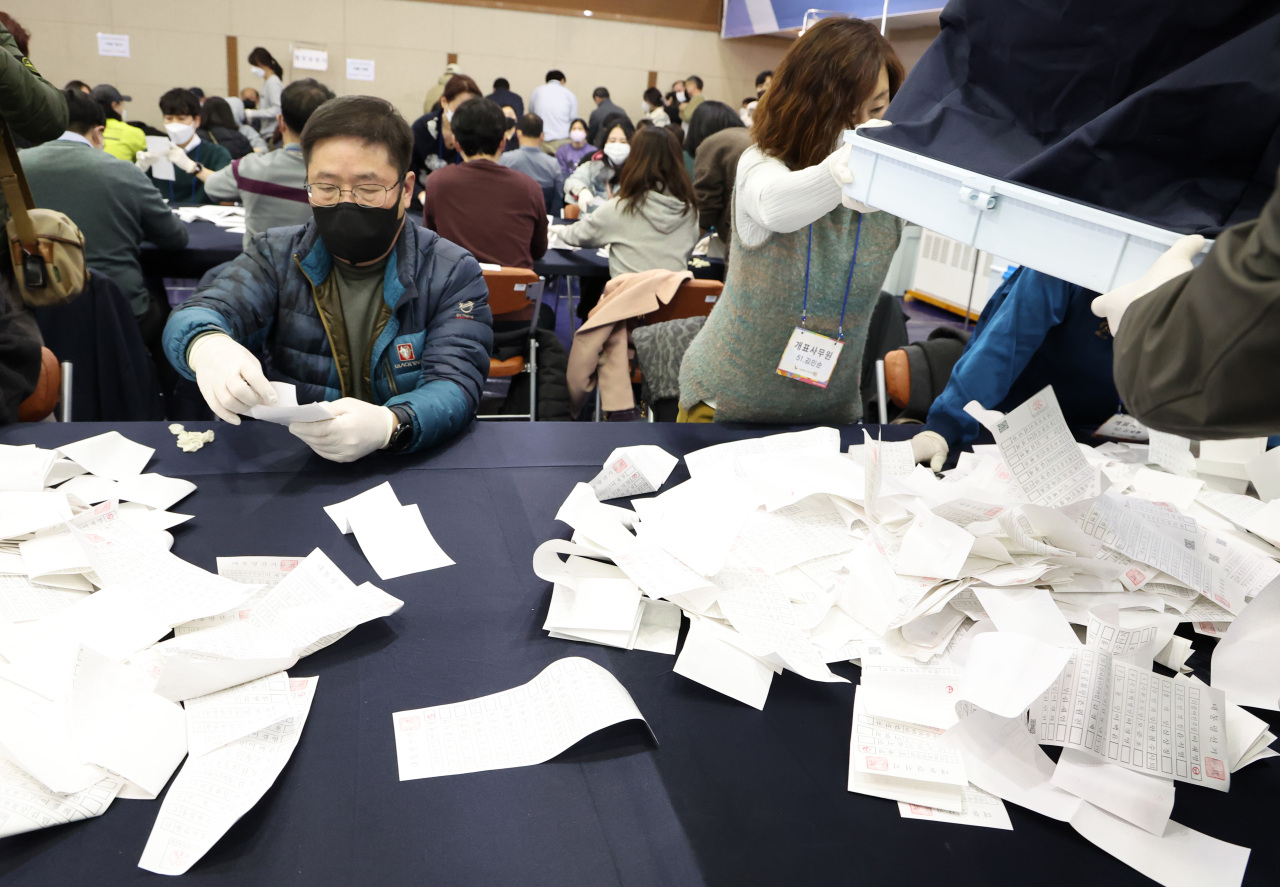 (Yonhap)
Wednesday’s presidential election came down to a neck-and-neck race, with exit polls placing the two front-runners at less than 1 percentage point apart.

At 7:30 p.m., the three terrestrial broadcasters KBS, MBC and SBS released the result of an exit survey conducted from 6 a.m. to 6 p.m. on Wednesday.

The exit polls projected Lee and Yoon would get 47.8 percent and 48.4 percent, respectively.

However another broadcaster, JTBC, showed a slightly different result. It predicted Lee and Yoon would at 48.4 percent and 47.7 percent, respectively. JTBC was the first broadcaster to conduct an exit survey other than the main terrestrial broadcasters.

Kwon Young-se, campaign chief of Yoon’s People Power Party, said, “We are glad that we won even a little, but it’s a smaller difference than we thought. Since a survey is a survey, we will wait humbly for the results to come out.”

When asked to explain the difference from the early predictions, “We can’t guess where the difference comes from,” he said. Earlier, party leader Lee Jun-seok said the party would win the election in a landslide.

The ruling party seemed more relieved by the results.

Lee Nak-yon, campaign chief of Lee Jae-myung’s Democratic Party of Korea, said, “We need to see the results without relaxing until dawn. We have high expectations.”

From the results, “We feel that the people must have been worried about the future of the country,” he said.

Since the exit poll was first introduced in the 2002 presidential election, the winner as predicted by the terrestrial broadcasters has never been wrong.

Election Day ran until 7:30 p.m. at 14,464 polling stations nationwide. Voting hours for ordinary voters were until 6 p.m. Voters infected with COVID-19 or in isolation voted separately, from 6 p.m. to 7:30 p.m.

To avoid confusion that occurred in early voting, the government deployed 70,000 police officers and put in reserve personnel from local governments to manage voting for confirmed COVID-19 patients and to maintain order at polling stations.

Throughout the day, the candidates and their parties made their final pleas for the public to vote.

“There is only one day left. It is said to be a close race,” he said. “The results may vary with thousands or hundreds of votes. I ask for this last favor with an earnest heart.”

He urged supporters to persuade “even one more person” to vote by the end of the day. “Tonight, I will greet you as the 20th president of the Republic of Korea. Thank you.”

At around 1 p.m., Yoon Suk-yeol also posted on Facebook, encouraging his supporters to go out and vote.

“There are only a few hours left to vote for the presidential election,” he said. “Currently, the turnout does not meet expectations. If the turnout is not high, the results cannot be guaranteed.”

“We will achieve a regime change with the People Power Party and establish the Republic of Korea rightly,” he said.

A day earlier, Justice Party candidate Sim Sang-jung also said on her social media, “A vote for No. 3 Sim Sang-jung can change the world.” She said the vote would be a strong force to support gender equality in Korea, the four-day workweek, green climate initiatives, a country with confident labor and a pluralistic democracy.

President Moon Jae-in, who voted in advance with his wife Kim Jung-sook on Friday, stayed at the official residence without a public event and was informed of the voting status.