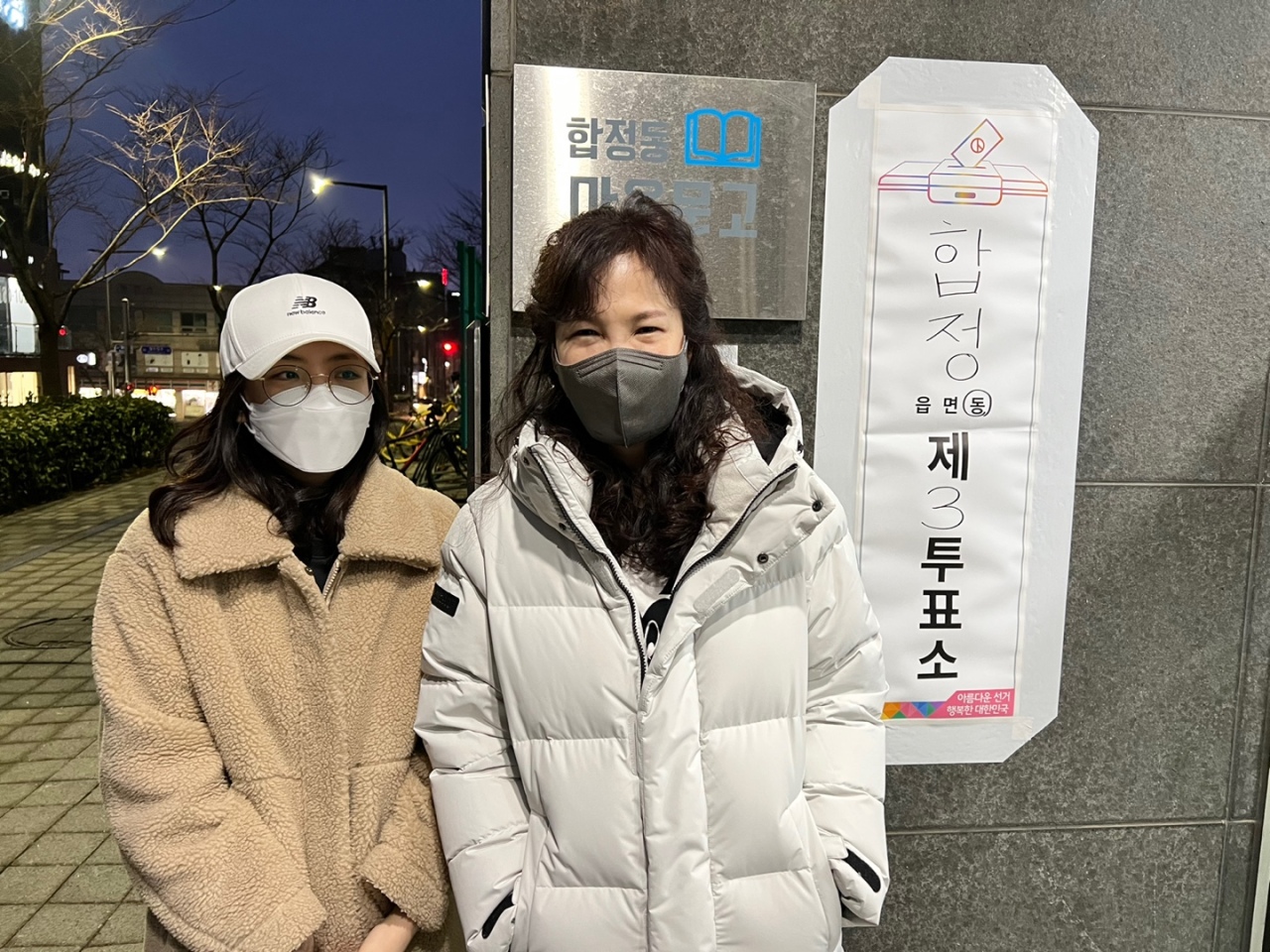 A mother and a daughter pose in front of a polling station after casting their ballots in Mapo-gu, western Seoul, in the early hours on Wednesday. (Jo He-rim/The Korea Herald)
Even before the darkness of dawn had faded away, voters trickled into polling stations Wednesday to elect their next president, with a strong desire for a new leader who can spearhead political and economic reforms and stabilize a society hit by an unprecedented pandemic.

In this year’s presidential election, 14,464 polling stations opened across the country to run from 6 a.m. to 7:30 p.m. The hours were extended from the usual 6 p.m. this year for COVID-19 patients and those in quarantine.

Just 10 minutes after a polling station opened at 6 a.m. in Mapo-gu, Seoul, a long line had formed from the entrance leading up the staircase to the third floor where polling booths were set up.

After casting her vote in Mapo-gu, a voter surnamed Kim, in her 50s, said she had woken her family up at dawn to vote because she wanted to make sure the candidate she supported wins the tight two-way race.

“I usually did not cast my ballots in previous elections, but this time I had to because it is such a tight race. I am worried that the other candidate will become the president,” Kim said, adding that her daughter in her 20s is even more passionate about the election. 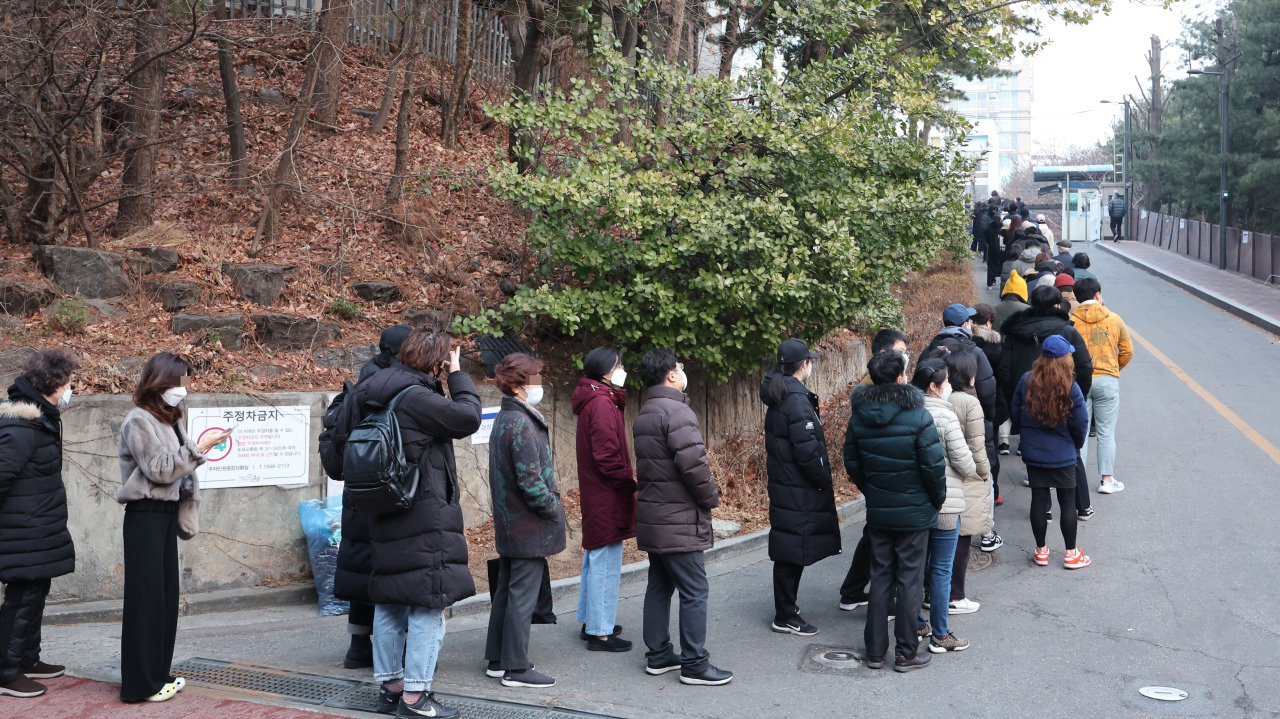 Voters line up to participate in the presidential election at a polling station in Gangnam, Seoul, Wednesday. (Yonhap)
In an election season where the sentiment of disapproval for all candidates ran high, there were many voters like Kim who came to cast a ballot with the intent to prevent the person they disfavor from winning.

Some also complained of the difficulties they faced in making their decisions.

“Voting for this election was so difficult. I did not know whom to vote for until the very last minute. I voted for a candidate who seemed to be not the worst choice,” said Kim Eun-ju, an office worker in her 30s, after casting her ballot in Eunpyeong-gu in Seoul at around 8 a.m.

When asked about what she meant by “the worst choice,” Kim explained it is someone who does not respect others.

“I think it is important for the president to respect rivals, colleagues and ultimately the people,” she said, referring to how the two front-runners, Lee Jae-myung of the ruling Democratic Party of Korea and Yoon Suk-yeol of the main opposition People Power Party, carried out smear campaigns against each other.

Many voters The Korea Herald spoke to were determined to exercise their voting rights with a focus on which candidate can bring back economic growth.

“Life is really difficult for small business owners these days. I wish the new president could sympathize with people like us,” Lee In-suk, in her late 50s, who runs a clothing store in Seoul, said after making her vote at a polling booth in Jongno. “It is all about the economy after all.”

Jeon Hye-ok, a Mapo-gu resident in her 60s, said she hurried to the polling booth at its opening hour because she had to open her shop early.

“Sole proprietors like myself need work on days like today,” Jeon said. Election Day is designated as a national holiday here.

While aware of the many controversies surrounding the presidential candidates, Jeon said she hopes for regime change.

“I am clear with my choice. I want the next five years to be better than how it was under the current government.” 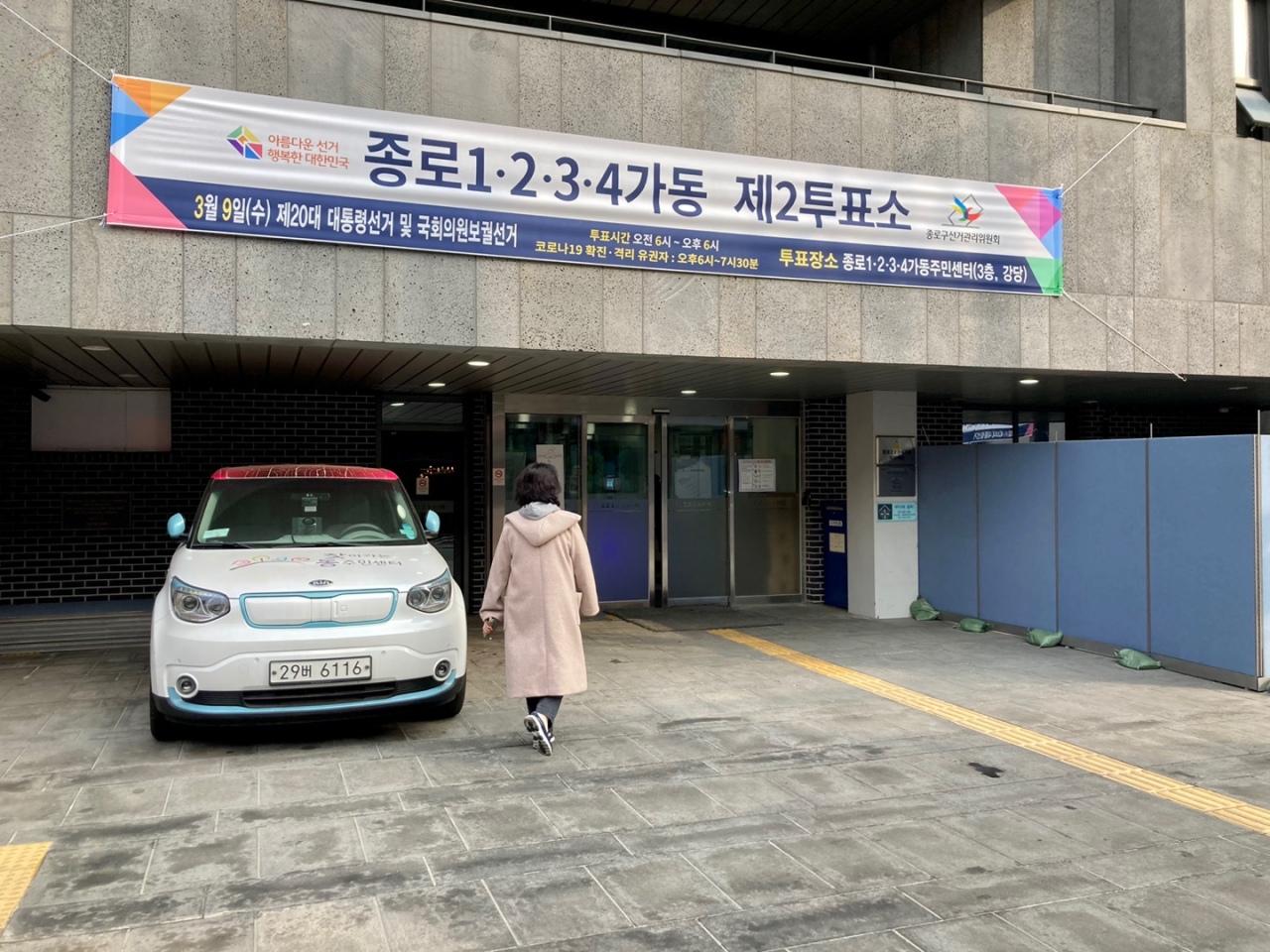 A voter heads into a polling station in Jongno-gu, central Seoul on Wednesday. (Im Eun-byel/The Korea Herald)
Young voters also expressed a hope for the next president to resolve social conflicts and create a society where they can achieve their dreams.

“This is the first-ever presidential election that I get to participate in since I was born, and I reached a decision on who to pick after thinking deeply with those around me,” a 20-year-old woman surnamed Son said, casting her vote in Gangnam, southern Seoul, at around 7 a.m.

“I tried to select a candidate who can improve the country’s economic status and who can help improve women’s rights.”

This year also saw the youngest-ever voters here participating. It is the first time that 18-year-olds -- legally minors under Korean law -- were able to cast their ballots in a presidential election. The National Assembly passed the amendment to lower the voting age from 19 to 18 in December 2019.

Yoon Hyun-seo, 18, said she voted for the nominee who she thought would financially support the less privileged, and who would also work on improving relations with North Korea. 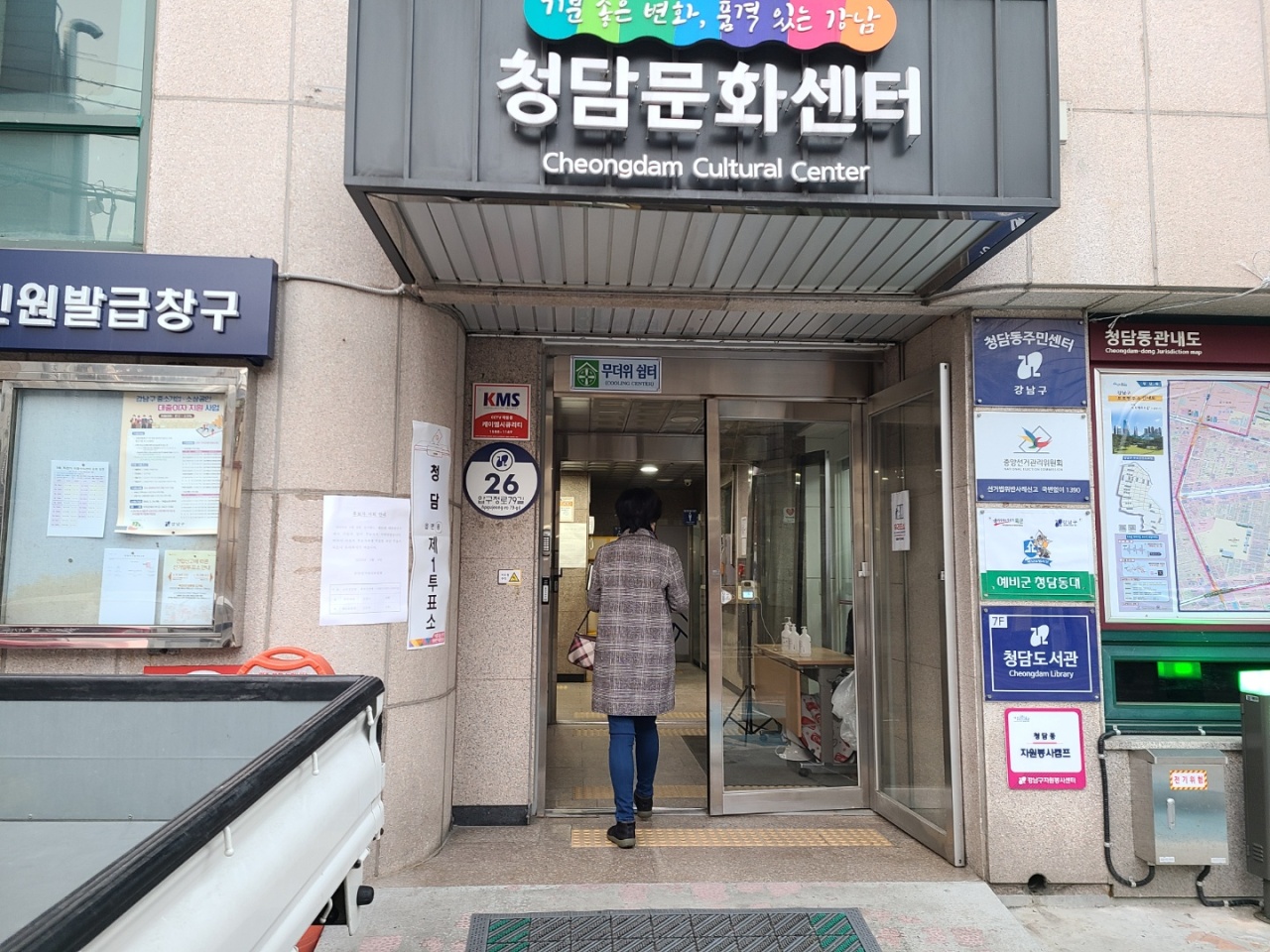 A voter enters a polling station in Gangnam in southern Seoul to participate in the presidential election Wednesday morning. (Ko Jun-tae/The Korea Herald)
Some voters were also concerned about the management of ballots at the polling stations, as they had witnessed the chaos in early voting Saturday caused by the election watchdog’s lack of preparation on accommodating COVID-19 patients.

“I am worried because the National Election Commission lacked proper management for early voting,” a voter in his 50s surnamed Seong said. “But I cast the ballot, hoping for a better Korea.”

One voter told The Korea Herald that she waited until the official voting day in worries of electoral fraud during the advance voting period, a conspiracy raised on the outcome of the parliamentary elections in 2020.

“There are so many things I was disappointed with under the current administration, especially on politics,” a voter surnamed Min in her 50s told The Korea Herald upon casting her vote at a polling station in Gangnam.

“I cast my vote during the early voting period in the last parliamentary elections, but I voted on the actual voting day this time on worries of electoral fraud.”

In Jongno, central Seoul, one of the five districts holding a by-election alongside the presidential election, a voter in her 20s said she cast her vote so that a candidate from a major party can represent the district better at the National Assembly.

Two parliamentary seats in Jongno-gu and Seocho-gu in Seoul were up for grabs, as well as three lawmaker seats for precincts in Daegu, Anseong in Gyeonggi Province and Cheongju, North Chungcheong Province.

After the polls closed for regular voters at 6 p.m., voters who have contracted COVID-19 or were in quarantine came out to cast their ballots until 7:30 p.m. As of Wednesday, there were 1.16 million eligible voters who were in isolation due to the pandemic.

While there were concerns that the chaotic situations that occurred during early voting for COVID-19 patients could repeat, Wednesday’s polls appeared to run relatively smoothly.

The election watchdog took flak for a lack of preparation during the early voting period, as virus patients had to pass their ballots to an election official at the time. Voters on Wednesday put their ballot papers directly into the voting boxes.

While most polling stations were set up in community service centers and public facilities, some polling venues were designated inside unlikely places, including an optical store, an automobile showroom and indoor gyms at elementary schools.