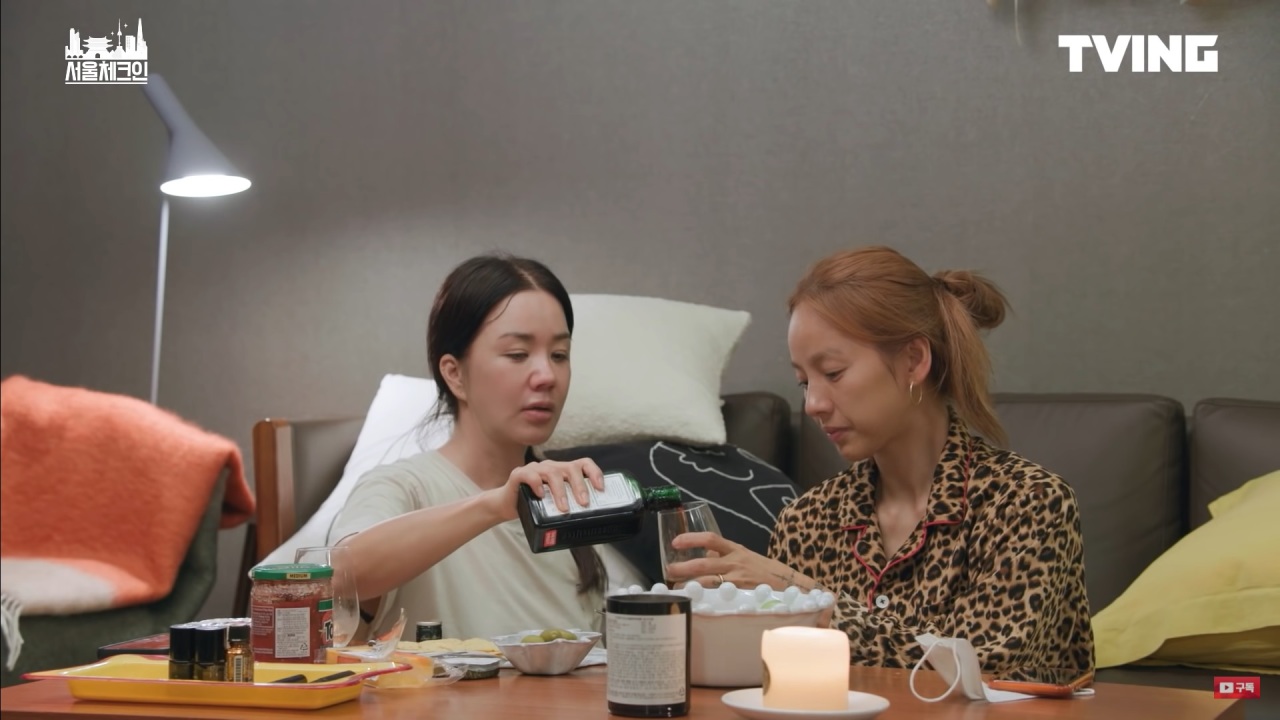 A screenshot from Tving’s YouTube video “Seoul Check-In” shows two K-pop divas Uhm Jung-hwa (left) and Lee Hyo-ri starring in a pilot of “Seoul Check-In” (Tving)
In response to the huge popularity of the pilot episode of “Seoul Check-In,” which topped local streaming platform Tving’s most popular shows chart on the day of its premiere Jan. 29, K-pop star Lee Hyo-ri is scheduled to return in April with a regular season of the show.

Helmed by television director Kim Tae-ho, who was behind two of South Korea’s longest-running and most successful variety shows -- “Infinite Challenge” from 2006 to 2018 and “Hangout With Yoo” from 2019 to present -- the new series will present a closer look at Lee’s daily life.

Former K-pop idol Lee in recent years has been known for her idyllic, slow lifestyle on Jeju Island, having moved to the southern island in 2013 with her husband, singer-songwriter Lee Sang-soon. The upcoming series aims to show Lee’s sojourn in Seoul and how she enjoys city life.

In the pilot episode, “Seoul Check-In” mesmerized viewers with a behind-the-scenes look at Lee rehearsing with the dancers of Mnet’s “Street Woman Fighter” for a special performance at the 2021 Mnet Asian Music Awards.

The 75-minute show followed Lee in her time off, including shopping with friends, spending time at a cafe, doing yoga and more.

Many fans and online commenters welcomed the return of “Seoul Check-In,” saying that just a single episode of Lee was not enough.

“It was worth paying for Tving,” one commenter said on a Tving YouTube video confirming the “Seoul Check-In” series.

“I am so happy that I can see this program every week,” another comment read.

The total number of paid subscribers tripled in the three days after the release of the pilot episode of “Seoul Check-In,” according to Tving.

“With its growing popularity and viewers’ love for the show, the teaser and highlights of ‘Seoul Check-In’ are also going viral, and are expected to reach 4 million views,” the local streaming service said in a recent press release.

Lee worked with director Kim in 2020 and 2021, when they worked on the project group Ssak 3 on “Hangout With Yoo” and starred in Netflix travel program “The Hungry and the Hairy” to showcase the beautiful life on Jeju Island.

Though the program is set to air exclusively on Tving in April, a fixed release date and the number of episodes have yet to be announced.