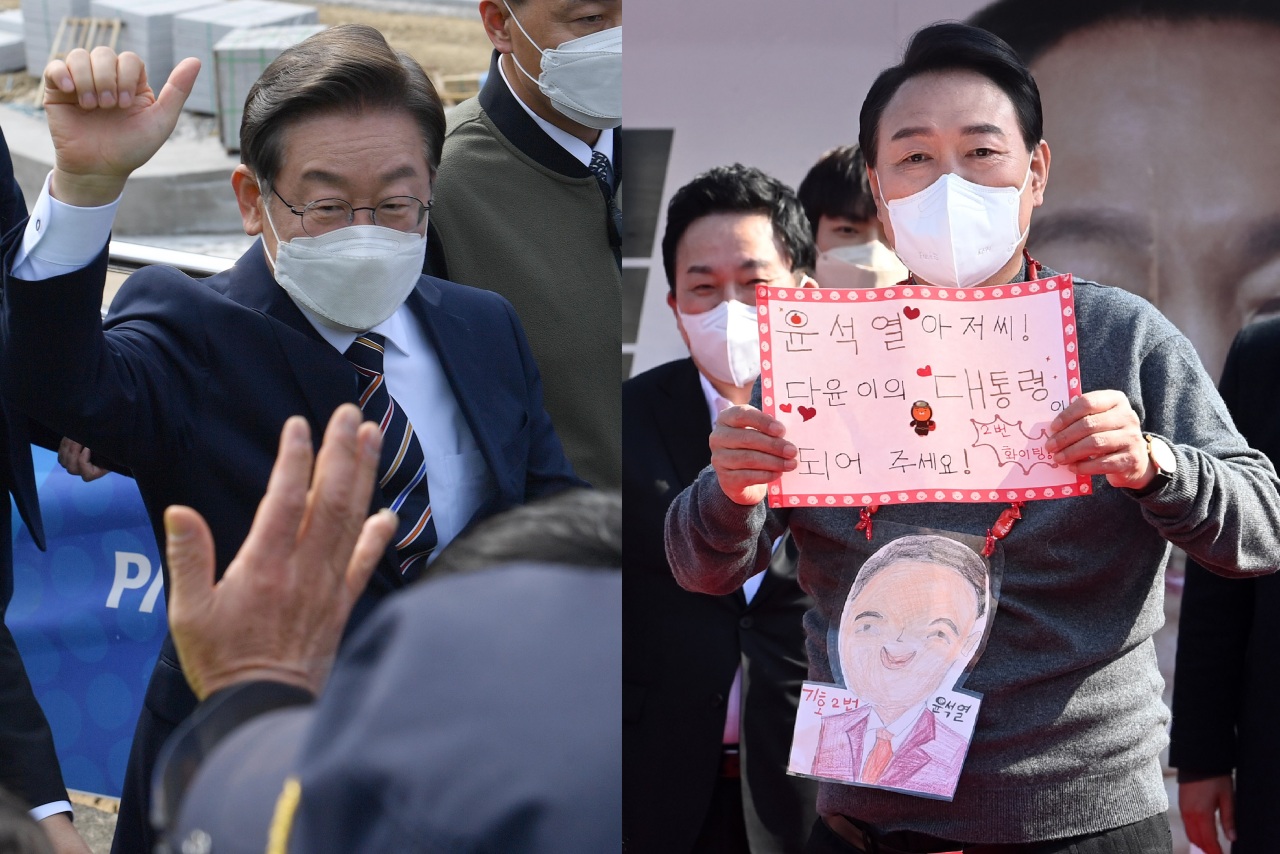 In the picture on the left, pesidential candidate Lee Jae-myung of the ruling Democratic Party of Korea holds his thumb up during a campaigning event in Paju, Gyeonggi Province on Tuesday. In the picture on the right, presidential candidate Yoon Suk-yeol of the main opposition People Power Party holds up a letter he received from a child during a campaigning event in Jeju Island on Tuesday. (Yonhap)
In the final hours of their campaigns for this year’s presidential election, the ruling and opposition blocs each predicted victory for their side as they ramped up last-minute campaigning on Tuesday.

With the election law prohibiting publication of all public surveys from six days before the election, the two frontrunners in the race -- Lee Jae-myung of the ruling Democratic Party of Korea and Yoon Suk-yeol of the main opposition People Power Party -- stayed on their toes.

“We will have to see (on the poll result) as the opponent is putting up their last-minute attack on us. But from the public polls published before the ‘black out,’ Yoon had stood ahead (of Lee) by 5 to 8 percentage points,” Lee Jun-seok said in a radio interview on Tuesday.

“When the swing voters who have not made up their minds yet make a choice, I believe the gap could widen by up to 10 percent.”

On the ruling bloc’s side, Rhyu Si-min, a liberal commentator and former chairman of the Roh Moo-hyun Foundation, claimed Lee Jae-myung would win the election, beating Yoon by “1 percentage point.”

“By 1 percentage point, I do not mean it as an absolute figure, but it will be a tight race,” Rhyu said, appearing on a TV program on Monday. 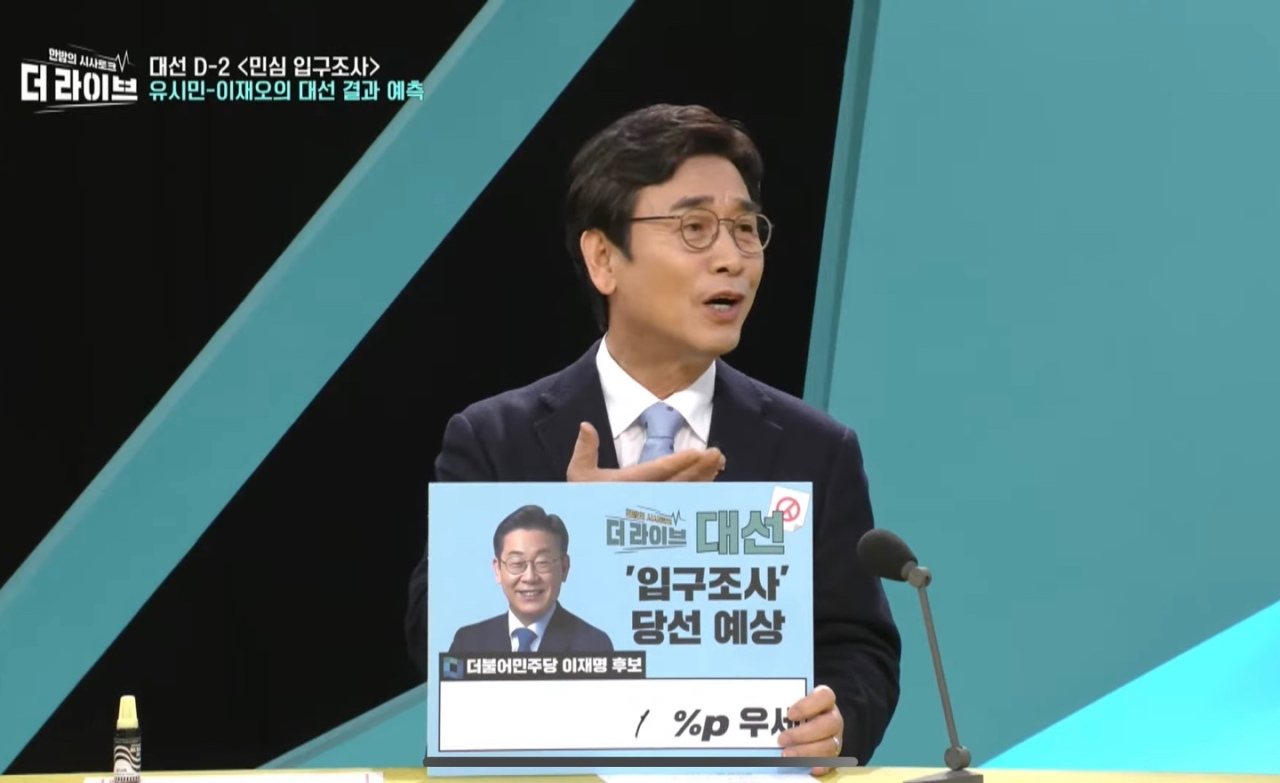 Rhyu Si-min, a liberal commentator and former chairman of the Roh Moo-hyun Foundation, holds up card to predict that the ruling party’s presidential candidate Lee Jae-myung will beat his conservative rival Yoon Suk-yeol by 1 percentage point, in a KBS TV program on Monday. (Screen captured from KBS The Live YouTube channel)
While public polls are withheld, candidates have data on their support ratings collected by their respective party’s research institutes, Rhyu said.

“I do not have the data, but I make my predictions from seeing the candidates’ faces, speaking tones and gestures,” Rhyu said.

“I cannot be sure about Lee Jae-myung, but I feel that Yoon is losing in the game. In the past couple of days, Yoon’s attitude is violent and unsmiling. He was also seen to raise his voice (against his staff).”

In the many public polls last released on Thursday, Yoon had been slightly in the lead against Lee in a neck-and-neck race.

But the two sides acknowledge the final election result can be different, as variables remain to affect the votes.

For one, the latest public surveys were all conducted with Ahn Cheol-soo of the minor opposition People Power Party still in the race, running at a distant third at the time.

But Ahn dropped out of the race to declare support for Yoon after the surveys were conducted, which means Yoon could have absorbed some of Ahn’s support rating.

“I believe Yoon and Ahn’s campaign merger would have inevitably played in favor to Yoon because Ahn appeared to hold about 6 percent of support in polls at the time,” Eom Gyeong-yeong, director of local political think tank Zeitgeist Institute, told The Korea Herald.

But the effects may be limited, as some of Ahn’s supporters in their 20s who chose Ahn because they did not like Yoon may have moved to support the ruling party’s Lee Jae-myung, Eom said.

The recent controversial allegations the two sides are putting up against each other only a few days ahead of the final voting day would also have minimal effect on the final results, experts say.

For instance, a recent news report on Sunday accusing Yoon of unlawfully covering up an investigation as a favor for his acquaintance when he was a prosecutor came after early voting, which marked a record turnout, Eom said.

In addition, the voice recording the news outlet cited as evidence also needs to be verified on its authenticity, meaning more time is needed to pursuade voters.

Opinion is divided on how voter turnout would play in favor of the candidates. Some experts say higher turnout is better for Yoon Suk-yeol, the contender from the conservative main opposition party, as polls show over 50 percent of the electorate want a shift in power from the incumbent liberal Moon Jae-in administration.