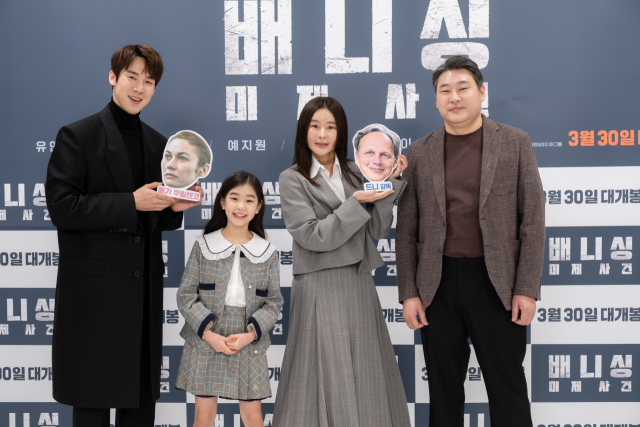 “It is an incredible chance to shoot in Korea now. You might not know how loved Korean contents are around the world. Korea is like a model to the world,” Dercourt said during an online press conference held on Tuesday.

The director added that he was excited to find out how staff and actors work in Korea to create films.

In the upcoming film “Vanishing,” Alice (played by Olga Kurylenko) is a successful forensic scientist known for inventing a revolutionary technique that can restore the damaged skin of corpses. She visits South Korea to attend a conference and during her visit she receives a request from the Korean police for her help with an unidentified corpse found in a river.

Alice and Jin-ho (played by Yoo Yeon-seok), the detective on the case, learn that the body is connected to an organ trafficking syndicate.

Although the director and the actors often had to communicate with body language, Dercourt explained that it was not difficult to understand each other as they shared a commonality.

“We had a common language which is cinema,” Dercourt said.

The French director recalled a time he was surprised by some of the cultural differences during the filmmaking process.

Yoo explained that it was a scene where he arrests the criminal while making sure not to alarm the elderly mother who was also in the house.

“I said that in Korea you have to take off your shoes in this situation and the director was very surprised. But if Korean audiences watch it they would all understand,” Yoo said.

The director also added that he had a lot of help from Korean staff in creating a film that is shot in Korean but one that is also new to the local audiences.

“If you go to places in Paris, for French people it is usually cliche, so when I find locations that I like, I asked people (Korean staff) around me for their opinions,” he said.

The director said he also referenced some Korean crime thrillers, such as “The Chaser” directed by Na Hong-jin and “Memories of Murder” by Bong Joon-ho, although he was careful to make sure it did not become “cliche,“ he said.