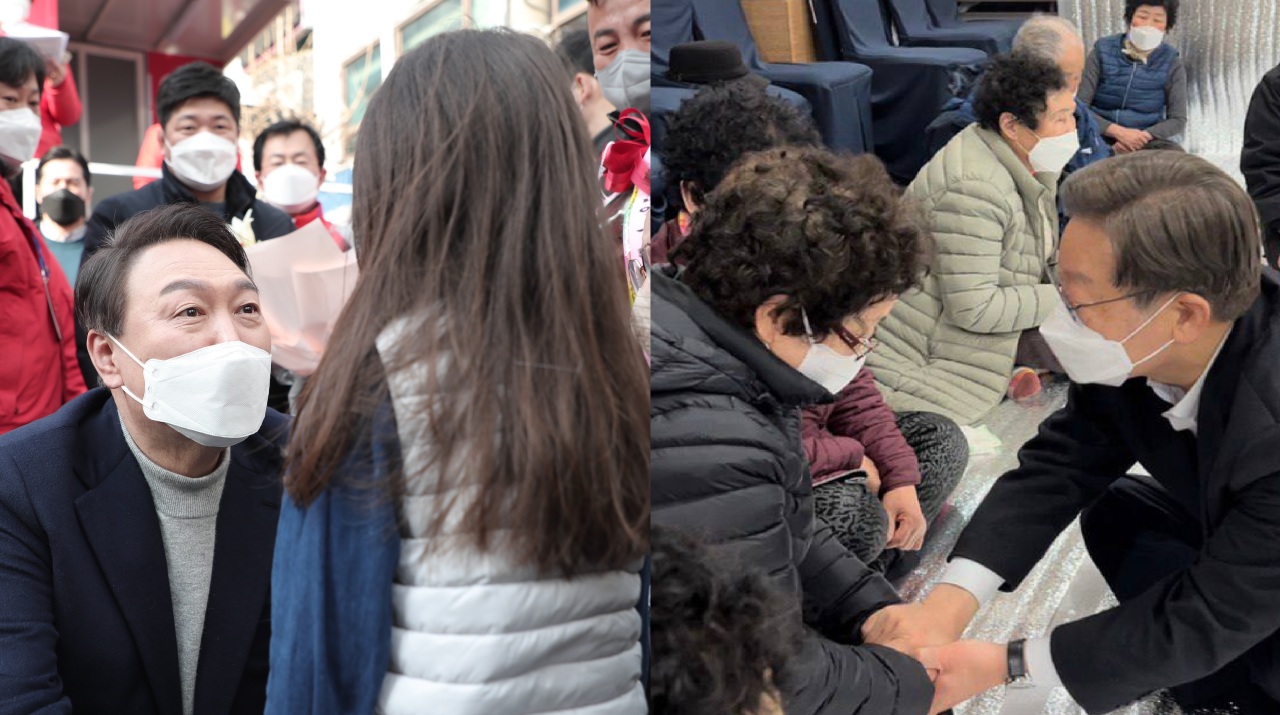 In the picture on the left Presidential candidate Yoon Suk-yeol of the main opposition People Power Party greets a child during a regional canvassing event on Feb. 19. (People Power Party) Presidential candidate Lee Jae-myung of the ruling Democratic Party of Korea (in the picture on the right) greets people in an evacuation shelter in Uljin County in North Gyeongsang Province, where a wildfire broke out Saturday. (Democratic Party of Korea)
In their last-ditch efforts to woo voters, the two prominent presidential candidates Lee Jae-myung of the ruling party and Yoon Suk-yeol of the main opposition party are each shouting out, separately, how they are the best person to make real improvements to the lives of the people.

As their canvassing efforts echo each other, their welfare pledges also appear to be similar, though they come from different political backgrounds -- Lee from the liberal Democratic Party of Korea and Yoon from the conservative People Power Party.

Because welfare policies are closely linked to the daily lives of the people, The Korea Herald has looked into their pledges to check how the two nominees plan to tackle some of the trickiest social problems should they be elected president.

South Korea has the world’s lowest fertility rate -- the average number of babies a woman is projected to have during her lifetime -- measured at 0.81 in 2021.

In a bid to tackle the low birthrate issue, both Lee and Yoon have put out a series of support plans for parents. But civic groups such as the Citizens’ Coalition for Economic Justice say they are lacking in details, and reveal little about their underlying philosophies.

Both candidates have promised to expand support for treating health conditions related to pregnancy and childbirth. They are also on the same side of increasing financial support for fertility treatments. On this, Yoon said his government would expand to all diagnosed couples regardless of economic status, unlike the current system that selectively chooses recipients.

Lee promised to introduce a system that automatically registers maternity leave for the mother when she gives birth, to guarantee the right to take time off work. In order to encourage fathers to also take part in child rearing, Lee pledged to make it mandatory that fathers also take paternity leave for a certain period of time.

In addition to parental leave, Lee promised to provide tax benefits for babysitting costs for parents with infants.

In an effort to share the burden of child rearing, Lee also said he would extend school hours for elementary schools to 3 p.m. and then run an extracurricular program until 7 p.m. to keep students at school until their parents pick them up after work. Keeping the policy of the incumbent Moon Jae-in administration, Lee also said he would add more “village schools,” or day care centers involving neighboring parents.

Yoon Suk-yeol’s main pledge to encourage childbirth is to provide a monthly allowance of 1 million won ($840) for a year to all parents who give birth to a child.

Acknowledging that a year of financial support is not a long-term solution, Yoon also promised to increase the period of parental leave from the current two years (one year for each parent) to three years.

Paternity leave at childbirth would also be extended from the current 10 days to 20 days under Yoon’s government. To lessen the burden of child rearing for parents, Yoon also promised to introduce a state-run babysitter system for young children and elementary school students.

On the care program after school ends, Yoon said he would also introduce an extracurricular program for elementary students, running it an hour longer than Lee, until 8 p.m.

Yoon’s government would also provide “various incentives” to companies that adopt a remote working system for parents, although the candidate has not yet provided details on what that system would entail.

On the other side of the low birthrate issue is the increasing proportion of the country’s aging population.

With the country recording the highest elder poverty rate among members of the Organization for Economic Cooperation and Development, the two presidential candidates have competitively laid out pledges to increase financial support. At the same time, their well-intentioned pledges, however, have raised the question of how they will secure the finances to fulfill all their promises.

While 300,000 won ($246) is currently given monthly to all pensioners outside of the top 30 percent by income, both Lee and Yoon have promised to raise the amount of the basic pension to 400,000 won.

The two candidates have also pledged to establish the infrastructure needed to make life more convenient for seniors, as well as to come up with different forms of shared housing for them to rent at low prices.

Both candidates have promised to enhance career education for older people and create more jobs for the over-60s. Lee said he would increase the number of jobs for seniors from the current 800,000 to 1.4 million by the end of the five-year presidency.

In his promise to establish a social system where seniors can receive care services without having to go to a nursing home, Lee said he would expand the public medical support system to promote family doctors and visiting physicians to treat patients at home.

Yoon pledged to cover the cost of the shingles vaccine for those over 65, and provide vouchers to encourage their participation in various activities such as tickets for cultural exhibitions and traveling.

He also pledged the establishment of a technology-based health management system, using artificial intelligence and sensors to monitor conditions for seniors living alone, and to develop a robot assistant to aid them.

The election pledges laid out by the two presidential candidates for the disabled are not much different from their predecessors, nor from each other.

As the Korea Differently Abled Federation put it, the pledges of both nominees appear to reflect their lack of serious consideration in bringing the necessary changes to a flawed welfare system that has largely remained the same for decades.

Both Lee and Yoon have vowed to guarantee access to transportation for disabled people, and made it their pledge to expand the operation of low-floor buses across the country. They also promised to come up with other means of transportation, such as taxi-hailing services for those with disabilities.

Lee pledged to establish a national committee dedicated to disability issues under the presidential office and to increase employment in the central and local governments. On the pension for disabled people, which is given to people outside of the top 30 percent, Lee also said he would expand the recipient group to include those with a single disability.

To lift the employment rate for disabled people -- which, at 35 percent, is little over half the overall employment rate of 60 percent -- Yoon said he would strengthen career training for the disabled in the fields of big data, artificial intelligence and the internet of things, core technologies for the “fourth industrial revolution.” He would increase the number of “digital training centers” to 17, from the current two.