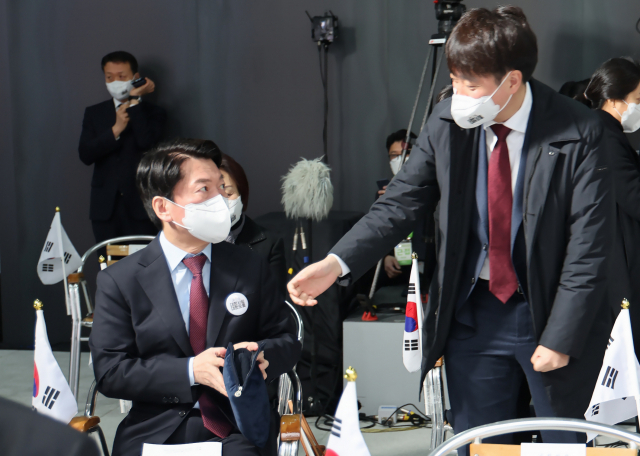 Ahn Cheol-soo, the chairman of the minor opposition People’s Party (left), looks at Lee Jun-seok, the chairman of the major opposition People Power Party extending his hand for a handshake, at the March 1 Independence Movement Day commemoration event on Tuesday. (Yonhap)
People Power Party Chairman Lee Jun-seok on Friday dismissed rumors of a co-chairmanship with Ahn Cheol-soo as various rumors about Ahn‘s next steps arose since his stepping out of the race.

Ahn, the chairman of the minor opposition People’s Party, conceded his candidacy to the People Power Party’s Yoon Suk-yeol on Thursday. There were rumors about Ahn‘s next moves, including one about him possibly becoming a co-chairman of the main opposition once the two parties merged after the election.

As local reports raised the possibility of Ahn undertaking a co-chairman position in the merged party, Lee dismissed the idea, saying he has not considered such an option.

“I have not heard that such an option is being discussed. I heard that the idea (of Ahn becoming co-chairman) had not even been on the negotiation table,” Lee said during a radio interview.

Lee added that he expects the current one-man leadership system, with him in the top spot to stay the same, even after the merger with the People’s Party.

As Lee and Ahn have often been at odds, observers have been raising questions on how the two would manage their relationship in one party. Their history goes years back, since they first faced off against each other for the constituency seat in Nowon-gu, northern Seoul, in 2016.

Over the campaign merger, both Lee and Ahn‘s sides had flung insults at each other, as their merger attempts failed several times before.

When Ahn was asked his thoughts about Lee Jun-seok’s past comments during the press conference after the candidates’ merger announcement on Thursday, Ahn said, “I don’t really care to listen to things I’m not interested in. I don’t know what that person said. Tell me.”

On Thursday, Ahn released a joint statement with Yoon announcing his resignation in the presidential race, and the plan to merge his party with Yoon’s.

According to the two nominees, they reached an agreement to unify their candidacies at the last minute in an overnight meeting where they were both present, along with their confidantes. At the meeting were Rep. Jang Je-won of the People Power Party on Yoon’s side, and Rep. Lee Tae-kyu of the People’s Party on Ahn’s side.

Apparently sidelined in the negotiation process, Lee stressed how his party holds the authority on personnel management. He also denied reports that the nominees have agreed on saving two seats in the party’s supreme council for members of the People’s Party.

“I have not heard about it, and the party did not make such a suggestion either,” Lee said. “(The negotiators) were not given any authority (to decide), and regarding the party posts, the decision is fully up to the party.”

On Thursday, Rep. Lee Tae-kyu made clear that Ahn will be taking on any role that he wants if Yoon wins in the election.

While competing for the presidency from different parties, Yoon had sought to merge with Ahn, to join forces and win his tight race against Lee Jae-myung of the ruling Democratic Party of Korea.

“If they win in the election, they (Yoon and Ahn) will be the major stakeholders of the new government. One will be the president, and the other person will take some kind of role,” Rep. Lee Tae-kyu said.

“Whether that role will be the prime minister, or in other fields, that decision would be for them to decide.”

Lee also noted that the candidacy merger agreement came about once Yoon agreed to accept everything that Ahn wants to do.

Lee Tae-kyu also opened the possibility of Ahn becoming a co-chairman with Lee Jun-seok for the envisioned party.