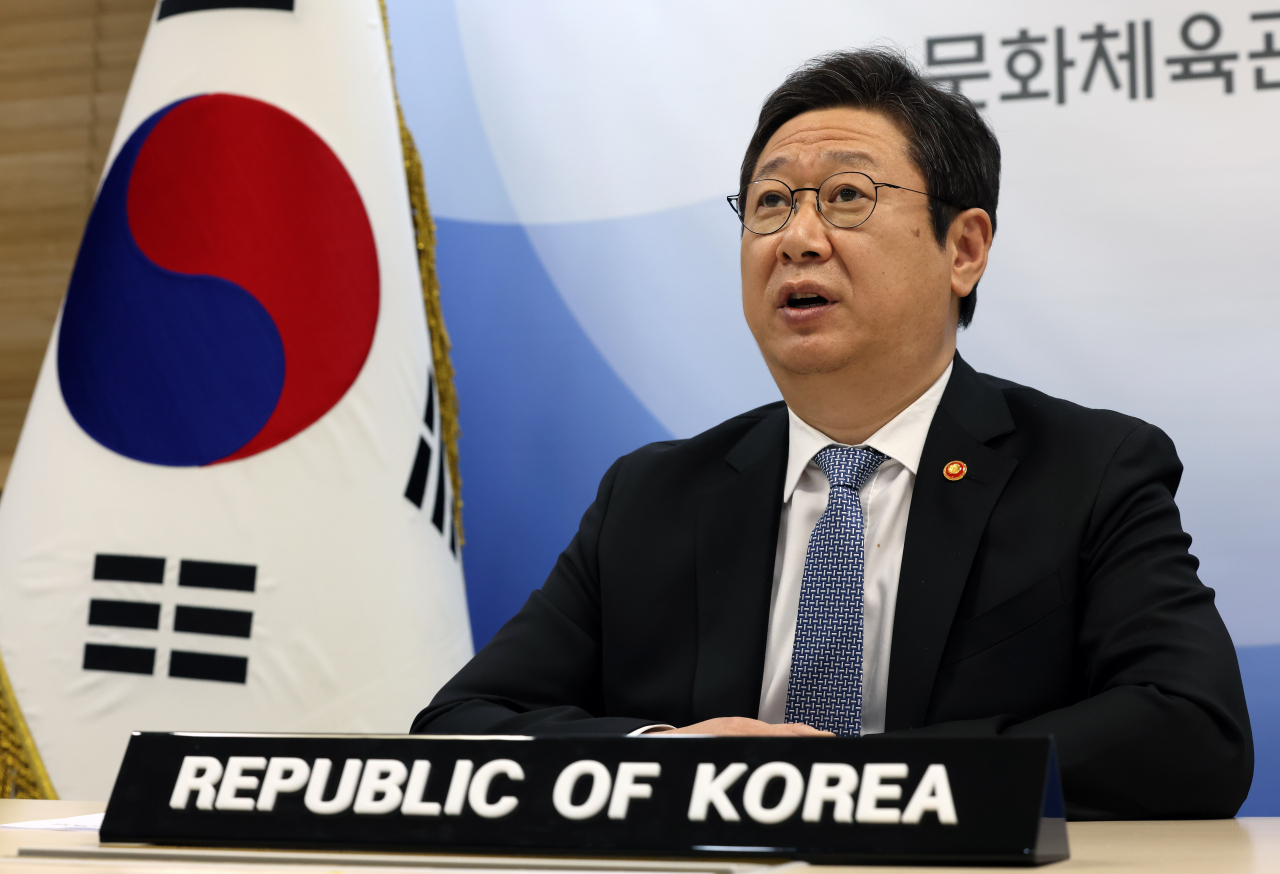 South Korea's Minister of Culture, Sports and Tourism Hwang Hee speaks during a videoconference of sports ministers of 26 countries on Friday, in this photo provided by the ministry. (Yonhap)

The sports ministers of 26 countries, including South Korea and the United States, agreed to ban athletes from Russia and Belarus from international sports games to be held in their countries as part of sanctions over Russia's invasion of Ukraine, officials said Friday.

The ministers reached the agreement during a videoconference hosted by British Sports and Culture Minister Nadine Dorries at midnight to discuss joint responses to Russia's aggression, officials of the culture and sports ministry said.

The countries put together a draft joint statement based on consensus that Russia should be penalized for its invasion of Ukraine and Belarus for allowing Russia to use its territory to stage the invasion, officials said.

The draft statement calls for stripping Russia and Belarus of rights to host international sporting events and banning individuals and teams representing the two countries from competing in all sports games in the 26 other countries.

The statement will be formally adopted by the weekend after further discussions, officials said.

The joint statement followed a series of sanctions against Russia imposed by global sports organizations.

The International Olympic Committee issued a statement calling on sports organizations to cancel events in Russia and Belarus. Since then, the two nations have been shut out of most of the top tournaments in the world, including the Winter Paralympics in Beijing, which run from March 4-13. Russia's national and club teams were thrown out of FIFA and UEFA competitions earlier this week.

"South Korea fully agrees with the joint statement, which includes active and practical sanctions in the sports sector to curb armed invasion and resolve the situation peacefully," South Korea's Minister of Culture, Sports and Tourism Hwang Hee was quoted as saying in a press release from the ministry.

"We will ban Russian and Belarusian athletes from participating in all international sporting events in South Korea," he said.(Yonhap)