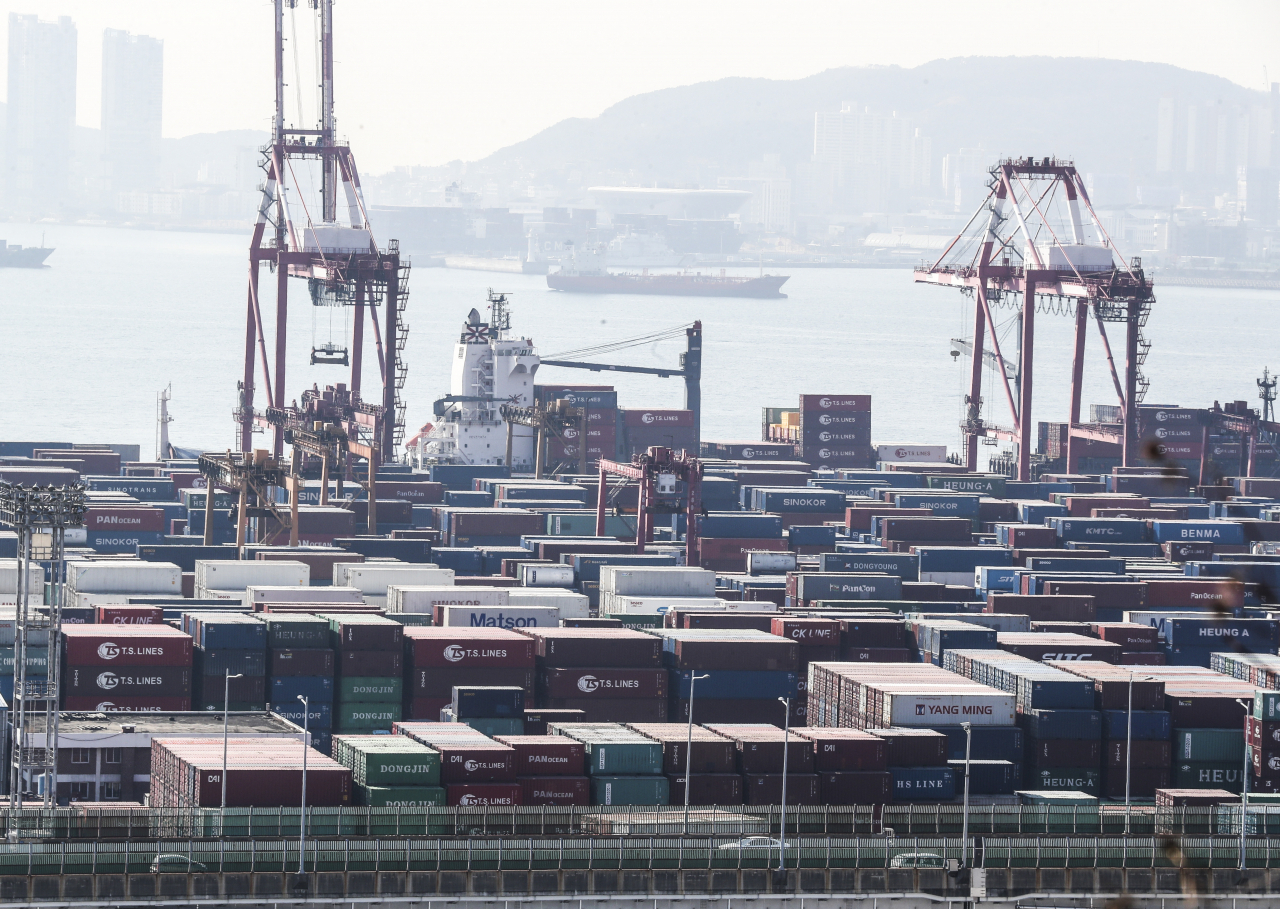 This file photo, taken Feb. 11, 2022, shows stacks of containers at a port in South Korea's southeastern city of Busan. (Yonhap)

The move came as South Korea's Trade Minister Yeo Han-koo met with senior US officials in Washington on Thursday and the two sides agreed to include South Korea in the US' list of exempt countries.

Last week, the US government announced the Foreign Direct Product Rule (FDPR) for "all of Russia" as part of its export controls to block Russia's access to global high-tech products and other foreign-produced major items, such as semiconductors, over the Russian invasion of Ukraine.

The measure calls on companies to receive a license from the US for tech-related items using US technology before they can be shipped to Russia, which is feared to affect major South Korean exporters, as they use US technology and software.

Yeo welcomed the US' decision to exempt South Korea from the FDPR, saying the countries "have once again reaffirmed their strong cooperation."

The trade minister added the US has agreed to publish Seoul's exemption from the FDPR in its government notice on Friday (Washington time) at the earliest.

South Korea is now included on the list of 33 nations, which includes the European Union, Britain and Japan.

"The US assessed that South Korea's sanctions against Russia are well-aligned with the international standard and announced its decision to put South Korea on the list of FDPR exempt nations," the industry ministry said in a release.

The foreign ministry said Seoul and Washington will continue close consultations on the implementation of sanctions against Moscow.

"South Korea and the US will continue to closely discuss various diplomatic and economic measures for a resolution to the Ukraine crisis, including the implementation of sanctions against Russia," a ministry official told reporters on the customary condition of anonymity.

Earlier this week, South Korea announced its decision to halt financial transactions with seven major Russian banks and their affiliates slapped with US sanctions, joining the global move to remove Russia from the SWIFT global payment network.

During Thursday's meetings with the US officials, Minister Yeo also called on the US to swiftly begin talks to revise the Section 232 tariff rules on Seoul's steel exports.

The US waived the tariffs on South Korean steel products in 2018, but it was in return for a yearly import quota of 2.63 million tons of steel, or 70 percent of Seoul's average steel products export volume over the past three years. (Yonhap)