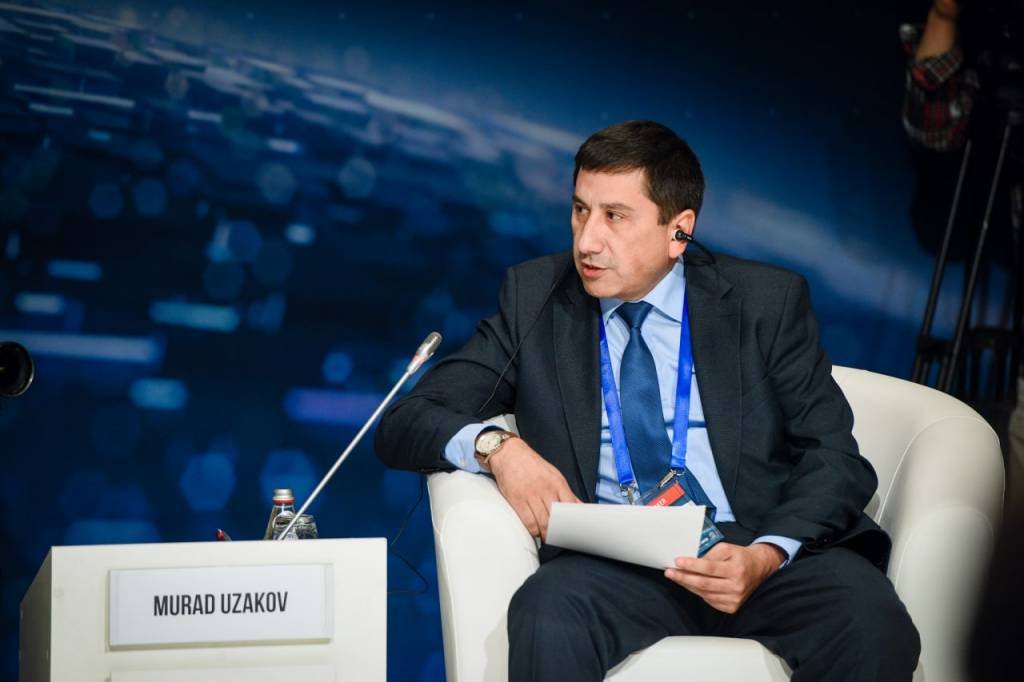 Murad Uzakov (Embassy of Uzbekistan in Seoul)
Uzbekistan will continue to pursue an active agenda of developing constructive and practical cooperation at the international and regional level in countering terrorism and other destructive threats.

Over the past few years, Uzbekistan has significantly stepped up its counterterrorism activities at the international and regional level, building a strategy of openness for cooperation in countering the common threats of extremism and terrorism with all states on an equal and mutually beneficial basis.

The national leadership has defined some of the most important directions of state policy as increasing efficiency of measures aimed at prevention and counteraction to extremism and terrorism, elimination of sources and channels of their financing, and integration of national and international efforts in this sphere.

To date, the main regulatory legislative acts in the field of combating extremism and terrorism in Uzbekistan are the Constitution of the Republic of Uzbekistan, the laws “On Combating Terrorism”, “On Combating Extremism,” “On Counteracting Money Laundering, Financing of Terrorism and Spread of Weapons of Mass Destruction” and “On Freedom of Conscience and Religious Organizations,” as well as the “The National Strategy of the Republic of Uzbekistan on countering extremism and terrorism for 2021-2026.”

The country’s solid legal framework in this area creates sustainable conditions and opportunities for multifaceted and comprehensive development of international and regional cooperation.

1. Uzbekistan has ratified and remains a responsible party to 14 international conventions and protocols on combating terrorism and extremism at the international level.

In 2006 our country was among the first to support the Global Counterterrorism Strategy approved by the UN General Assembly, which has become a unique document to enhance and consolidate national, regional and international measures in combating various manifestations of terrorism.

To date, all five Central Asian countries have completed the second phase of the Joint Plan of Action to implement the UNGCS adopted in 2011.

There is close cooperation between the Office on Drugs and Crime, the Counter-Terrorism Directorate and the relevant committees of the UN Security Council, including in implementing practical measures to cut off channels of movement and freeze terrorists‘ assets.

Tashkent actively participates in the activities of the Shanghai Cooperation Organization (SCO), which also aims to jointly ensure and maintain peace, security and stability in the region.

It should be noted in this context that the establishment of the SCO Regional Counter-Terrorism Structure (RATS) headquartered in Tashkent was a kind of recognition of Uzbekistan’s leading role in the fight against terrorism. In the framework of SCO, Uzbekistan is undertaking concrete and practical joint measures to prevent the younger generation from being drawn into the activities of various terrorist and radical structures, and also to provide for the enlightenment, spiritual and moral education of youth.

Thus, at the initiative of the Uzbek side, the Joint Appeal of the SCO heads of state to youth was adopted in 2018, and the Action Program to implement its provisions during the Qingdao summit on June 10, 2018, was approved by the Heads of State Council. Also, in 2021 the SCO RATS Council Decision No. 521 “On monitoring of emerging terrorist, separatist and extremist threats in the global information space” was signed.

Similar activities are being carried out in the Commonwealth of Independent States (CIS).

The program of cooperation of CIS member states in combating terrorism and other violent manifestations of extremism for 2020-2022 has been adopted. In 2020 alone, the law enforcement agencies of CIS countries jointly eliminated 22 cells of international terrorist organizations, which were recruiting people to train as fighters abroad.

Tashkent actively participates in the work of the CIS Anti-Terrorist Center, including joint training programs and anti-terrorist exercises.

Uzbekistan maintains partnership relations with the Organization for Security and Cooperation in Europe. A program for joint cooperation in the military-political sphere for 2021-2022 has been developed and is being implemented, which also provides for cooperation in countering terrorism, ensuring information, cybersecurity and assistance in combating the financing of terrorism.

2. A number of bilateral and multilateral treaties and agreements with states interested in jointly combating terrorism and other destructive activities have been concluded at the regional level as a result of Uzbekistan‘s active foreign policy activities. Bilateral treaties on strategic partnership were concluded with Kazakhstan (2013), Turkmenistan (2017), Tajikistan (2018), and a “Declaration on strategic partnership, strengthening friendship, good neighborliness and trust” was signed with Kyrgyzstan (2017), in which the priority of interaction in the field of security was identified as jointly countering the threats of extremism and terrorism.

In 2000 in Tashkent the agreement between Uzbekistan, Kazakhstan, Kyrgyzstan and Tajikistan “On joint actions in combating terrorism, political and religious extremism, transnational organized crime” was signed.

In 2011, the Central Asian countries, after multilateral consultations and consensus, adopted a Joint Action Plan to implement the UN GCS, which now serves as the basis for consolidating the efforts of neighboring states to combat the threat of terrorism.

In 2018, Uzbekistan initiated the creation of a new mechanism for the leaders of the republics to discuss and solve problems in the region -- the Consultative Meeting of Heads of States. Within this format of meetings, Tashkent identified as the most important priority the provision of regional stability and security, full-scale counteraction to modern challenges and threats, primarily with regard to preventing and combating terrorism, taking measures aimed at eliminating conditions conducive to its spread, and strengthening the capacity of states in this area.

Furthermore, following the third consultative meeting in Turkmenistan in August 2021, the sides reaffirmed that coordination of efforts in combating extremism and terrorism and the urgent need to settle the situation in neighboring Afghanistan is one of the most important factors in preserving and consolidating security and stability in Central Asia.

Also, within the framework of regional cooperation, Uzbekistan attaches particular importance to achieving stability and strengthening security in Afghanistan.

On March 27-28, 2018, the Tashkent International Conference on Afghanistan “Peace Process, Security Cooperation and Regional Cooperation” was held on the initiative of Uzbekistan’s President Shavkat Mirziyoyev.

The Uzbek side is in favor of consolidating international and regional efforts for the peaceful political establishment and economic reconstruction of Afghanistan. Another priority is to jointly counter the threats of international terrorism in Central Asia.

The provision of humanitarian assistance is critical in reducing terrorist threats and preventing destabilization in that country.

It is important to note that during the September 2021 Dushanbe summit of the SCO countries President Mirziyoyev stressed the importance of preventing the growth of extremism and radical ideology and using Afghanistan for subversive actions against the neighboring countries.

Cooperation on security issues is of paramount importance in the development of interconnectedness with South Asia. Bilateral cooperation with India and Pakistan is actively developing: through security councils, defense and interior ministries, military-to-military cooperation, counterterrorism exercises, military training, etc. These ties will contribute to better mutual understanding and trust, the formation of an interregional security environment necessary for the development of cooperation, and large infrastructure projects.

3. One of Mirziyoyev’s most significant initiatives was a proposal to hold an international conference in Tashkent in 2021 to mark the 10th anniversary of the Joint Plan of Action of the Central Asian countries to implement the Global Counter-Terrorism Strategy.

This Joint Plan has been implemented since 2011 and is the first regional document aimed at organizing the fight against the threat of terrorism through a unified approach based on the UN GCS and strengthening international partnerships. It is considered by the UN as a unique example of regionalization of the Global Counter-Terrorism Strategy.

Central Asia was the first region where comprehensive and integrated implementation of the GCS was initiated. In 2010, the UN including its Regional Centre for Preventive Diplomacy for Central Asia (UNRCCA) launched an initiative to assist the countries to develop a regional action plan for implementation of the GCS with the objective to strengthen regional cooperation and assist Central Asian countries in responding to emerging challenges to combat terrorism and prevent violent extremism in the region.

A Joint Action Plan for implementation of the GCS in Central Asia was adopted on Nov. 30, 2011, in Ashgabat, Turkmenistan, with support of UNRCCA and UN Office of Counter-Terrorism.

The Joint Action Plan for GCS in Central Asia was developed through multilateral consultations and consensus. It was the first regional document supported by the UN Office on Counter-Terrorism worldwide and was followed by the development of several other regional instruments, including in South and Central Africa and, more recently, the Arab Regional Counter-Terrorism Strategy.

According to UN Secretary-General Antonio Guterres, “Central Asian countries are a role model in the joint implementation of this UN strategy.”

In this regard, the UN, the states of the region and their international and regional partners supported an international conference in Tashkent dedicated to the 10th anniversary of joint implementation of the UN GCS in Central Asia. The main goals and objectives of the conference will be to summarize results of 10 years of cooperation under the Joint Plan of Action for Central Asia, to discuss current and emerging threats, and prospects for regional and international cooperation in combating terrorism, to exchange practical experience in implementation of the UN GCS in Central Asia and worldwide, to apply a unified approach in combating terrorism based on the UN GCS, to consider issues of gender equality and human rights, and to launch Phase 4 of the Joint Plan of Action.

To summarize, Uzbekistan will continue to pursue an active agenda of developing constructive and practical cooperation at the international and regional level in countering terrorism and other destructive threats, taking a comprehensive approach to developing preventive measures aimed primarily at eliminating the causes and conditions of the spread of terrorism.

Our country will also make efforts to strengthen, introduce and use improved mechanisms of regional cooperation within the framework of the Joint Action Plan to implement the UN GCS in Central Asia.

Murad Uzakov is head of the Department of Informational Analytical Center for International Relations at the Uzbekistan Ministry of Foreign Affairs. The views reflected in the article are his own. --Ed