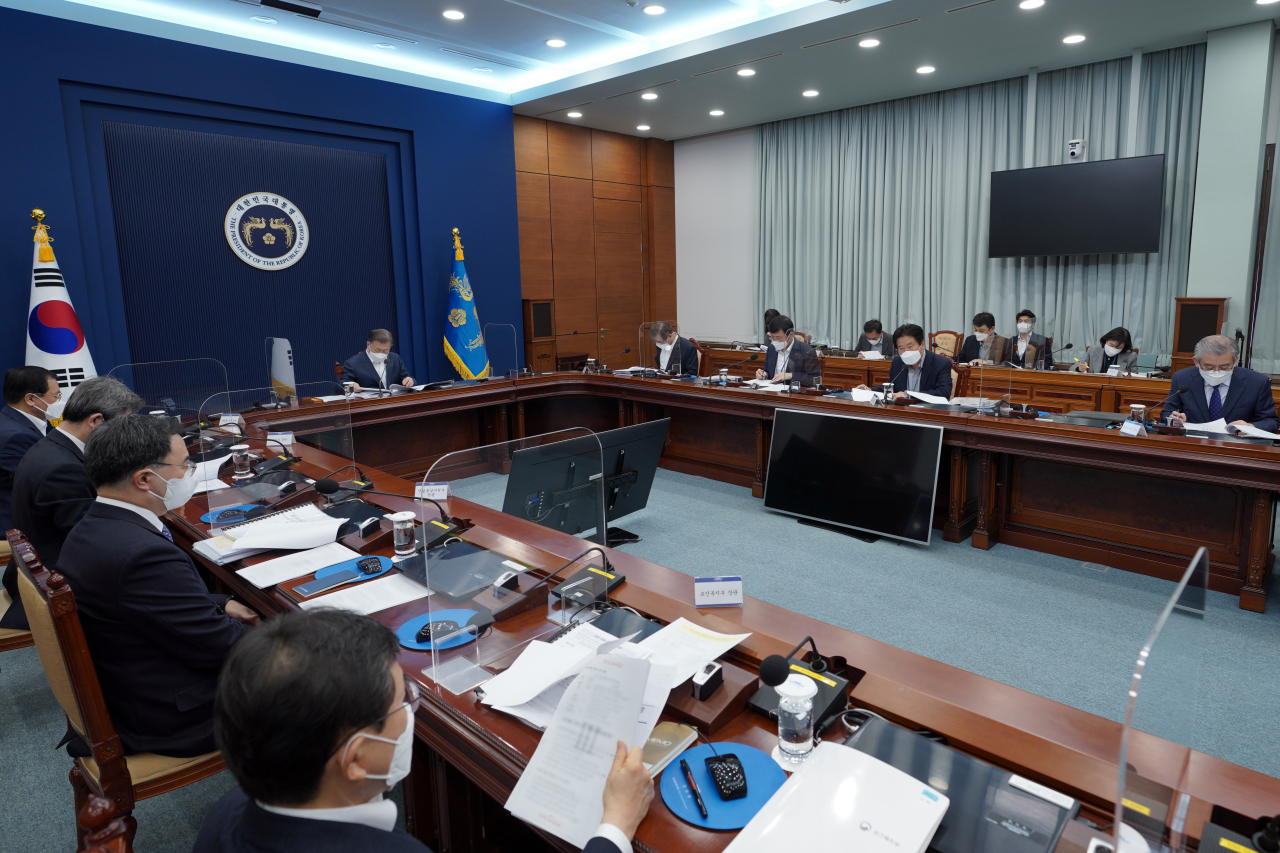 President Moon Jae-in said Thursday the government should strengthen its security capabilities for the next administration to respond to the complex security crisis agilely from the beginning.

Moon presided over a National Security Council expansion ministerial meeting at Cheong Wa Dae the same day, receiving a report from the NSC on the prospects for security threats from last year through 2030.

“The global security environment is changing rapidly,” Moon said at the meeting. “Recently, a new and complex security crisis is emerging and it is essential to make strategic plans on how to respond and overcome it.”

The meeting was held to share reports from related ministries and experts with the emergence of new security crises stemming from artificial intelligence and the pandemic, along with traditional military security, Moon said.

Moon said the current security landscape is “very complex.” “As the pandemic unfolds, the race to compete for supply chain leadership and preoccupy and retain emerging technologies continues.”

He alluded to the recent Ukraine incident.

“Behind the recent development, there are also problems with values and systems such as democracy and human rights,” he said. “Blocs of countries are underway and a new Cold War aspect is also appearing, which is amplified in the Ukraine crisis.”

Moon said many roles are being demanded of Korea as it rises in status, “We can be congratulatory and proud of ourselves, but it is also true that the burden has increased.” He sees high-level wisdom and cross-ministerial cooperation is needed.

In the political field, intensifying competition between democracy and authoritarianism, strengthening populism and the regression of democracy were cited as challenges. In the economic sector, carbon regulations, energy conversion, supply chain instability and the vulnerability of core energy infrastructure facilities in the nation were mentioned as key tasks.

The decline in the domestic food self-sufficiency rate was also cited as a challenge. To this end, they discussed countermeasure efforts to expand a stable self-sufficiency base, strengthen the ability to respond to the international grain market crisis and diversify overseas grain supply lines. The National Security Office also judged that security threats may arise from new technologies, such as artificial intelligence and the space industry.