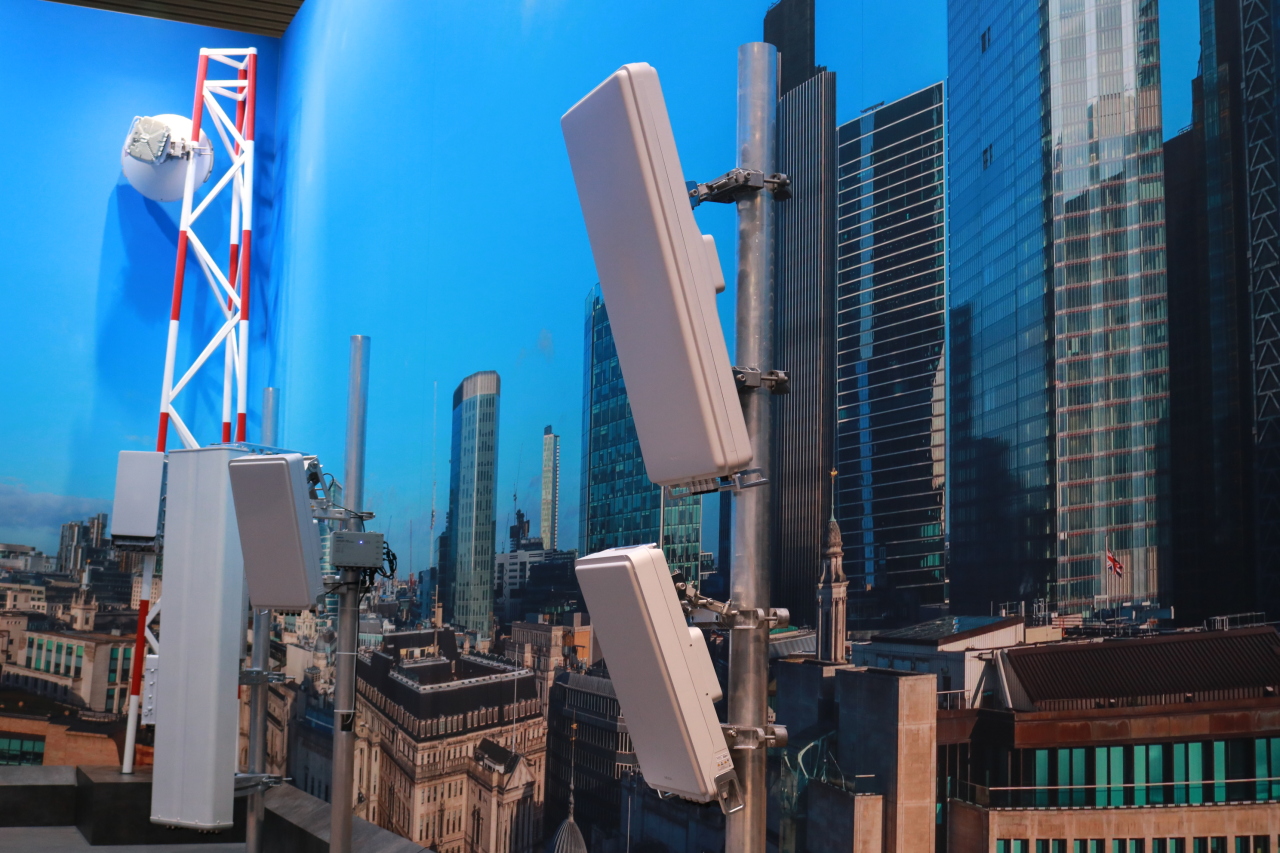 Nokia‘s massive MIMO antenna products are being displayed at MWC 2022 exhibition in Barcelona, Spain. (Son Ji-hyoung/The Korea Herald)
BARCELONA, Spain -- South Korea is on course to become the first country in the world where its mobile carriers scale up its 5G network capacity to more than 100 MHz-bandwidth for a single operator.

At the Mobile World Congress 2022 exhibitions, three network equipment suppliers -- Huawei Technologies, Ericsson-LG and Nokia -- unveiled the most recent updates of their 5G equipment. Representatives say these could help Korean telcos improve the quality of 5G delivery by doubling the bandwidth of their allocated network with a single piece of equipment.

The equipment, called massive MIMO antenna, allows a telecom carrier to use up to 200 MHz of a 400 MHz spectra.

And it enables bandwidths to be used on separate parts of the 400MHz range, so a carrier could use two 100 MHz bandwidths 200MHz apart, or even three or more smaller bandwidths.

Without the massive MIMO, Korean telcos would have to buy additional equipment to use more than one bandwidth slot or a bandwidth exceeding 100 MHz.

“Korea will become the first country to have its telcos occupy more than 100 MHz in terms of bandwidth (for a mid-range 5G network),” James Han, head of 5G sales Korea at Finland-based Nokia, told reporters at its MWC 2022 exhibition.

“The world will be watching, and we are seeing the new market coming.”

Some of these products are not only showcased but are also being deployed in Seoul.

Han said the investment has been underway to deploy its cutting-edge massive MIMO antenna in downtown Seoul, starting this year, as the deployment should be done prior to the forthcoming 5G spectrum auction by the government and the licensing procedures. 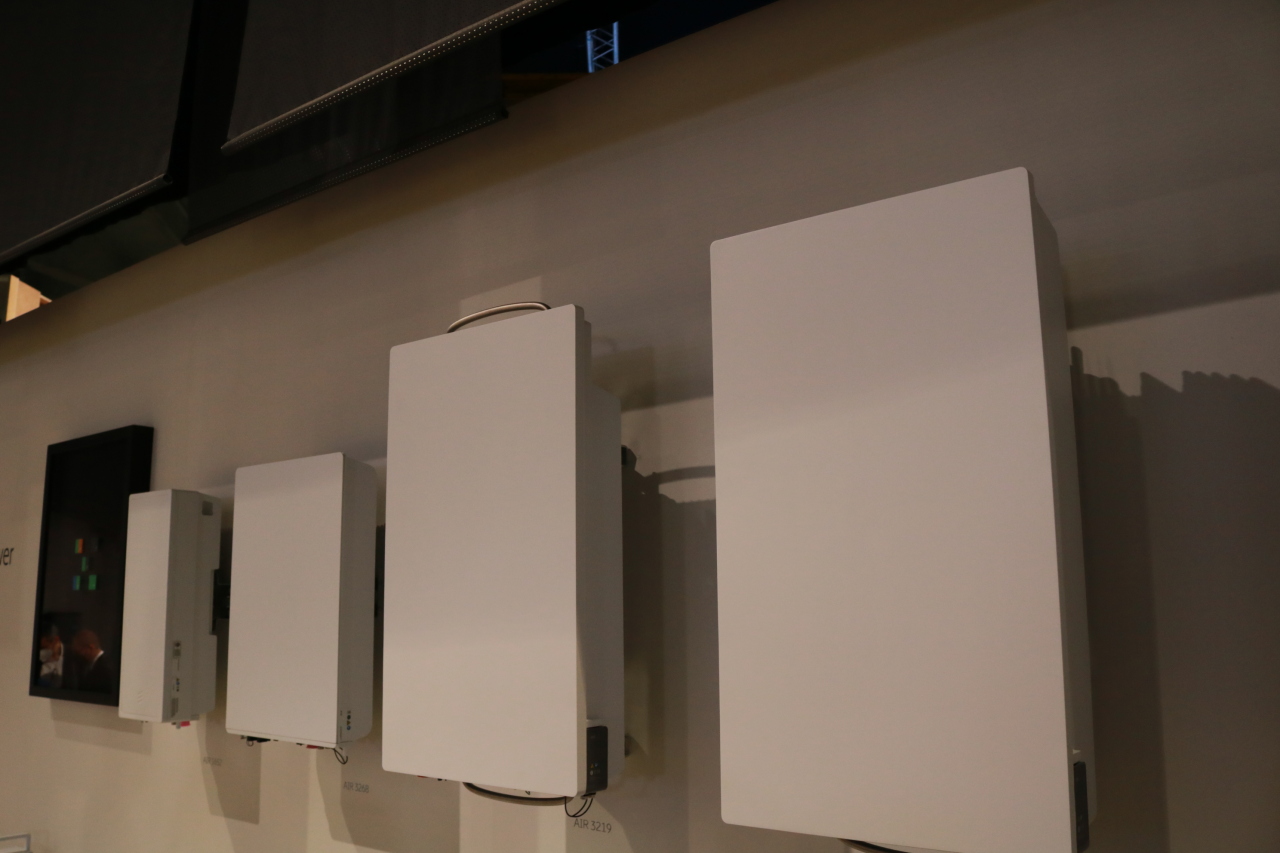 According to Lee Young-jo, vice president at Ericsson-LG, the deployment of a new antenna is expected to kick off in the second quarter.

“A telco would have been forced to buy two outdated pieces of equipment to (use) two separate slots, and this would have been a cost burden on the telco,” Lee told reporters.

Nokia and Ericsson-LG have both supplied their products to network infrastructure of Korean carriers KT and SK Telecom.

Another partner of the two, Samsung Electronics’ network division, did not unveil new equipment at MWC 2022 as it did not set up a booth for its network solutions.

On the other hand, Huawei Technologies, which supplies its equipment to LG Uplus, also showcased at MWC 2022 its massive MIMO solution that supports the 400 MHz bandwidth scope and 200 MHz spectrum availability. The solution, however, has yet to be deployed for LG Uplus.

Meanwhile, the new 5G technology indicated that a successful deployment could settle a heated debate between Korean telecom firms over spectrum allocations.

If the deployment is complete, all three companies -- SK Telecom, KT and LG Uplus -- are likely to be given the same opportunity to claim rights for the new 100 MHz spectrum.

Currently, Korean carriers were allocated the 5G spectrum for mid-band range at between 3.42 GHz and 3.7 GHz bandwidth.

The government in June 2018 allocated an 80 MHz spectrum to LG Uplus, while its rivals KT and SK Telecom both won auctions for 100 MHz spectrums.

Three years on, however, Korean telcos have been at odds over how the auction of additional bandwidth slots should be carried out.

So far, Korea’s 280 MHz bandwidth combined were allocated to telcos, while 320 MHz is to be auctioned before 2023, but details regarding the auction have yet to be determined.

The targeted 5G spectrum includes a 20 MHz slot adjacent to LG Uplus‘ allocated spectrum that was left out at the 2018 auction due to interference with neighboring frequencies.

Addressing the problem, the government sought to put the slot back up for auction, only to face opposition from SK Telecom and KT, arguing they were effectively deprived of opportunities to use the spectrum without additional infrastructure investment, because of technological limitations.