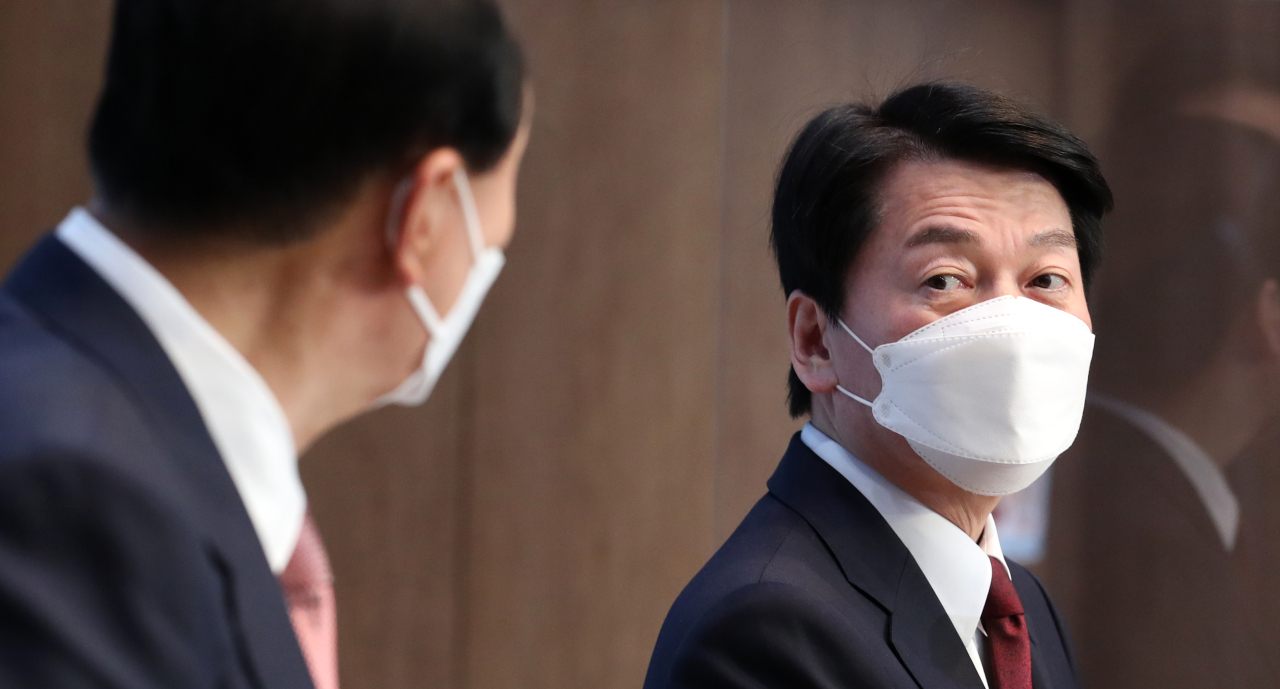 Ahn Cheol-soo speaks at a press conference held at the National Assembly, Thursday. (Yonhap)
Ahn Cheol-soo, the presidential candidate for the minor opposition People’s Party, stepped down once again from a election race on Thursday, marking his fourth withdrawal in a political career that extends just over 10 years.

Ahn became a big name in local politics starting in 2011, when there were rumors that he -- a respected doctor-turned-software mogul at the time -- would run in the Seoul mayoral by-election.

Ahn, however, declined to join the race, instead choosing to endorse the late Seoul Mayor Park Won-soon, who was a lawyer at the time. Many anticipated Ahn would run for the next year’s presidential election.

Meeting the anticipation, Ahn joined the presidential election race in 2012. However, in a bid to stop eventual President Park Geun-hye from winning the election, Ahn and then-candidate Moon Jae-in discussed a campaign merger.

Much like Thursday’s merger with Yoon Suk-yeol of the main opposition People Power Party, the Ahn-Moon merger talks dragged on for weeks and appeared to fall apart, only for Ahn to eventually step down and announce his support for Moon. But Park won the race in the end, and Ahn left for the US.

In 2014, Ahn, who had been an independent member of the National Assembly, began the process of founding his own party. Ahn’s would-be party, however, merged with the Democratic Party to establish the New Politics Alliance for Democracy. However, Ahn left the party the following year citing “disagreements in political ideology.”

Then Ahn founded the People’s Party in 2016, joining the presidential election race the following year. He finished the race with 21.41 percent support.

In 2018, Ahn merged the People’s Party with the Bareun Party, which had split from the defunct Saenuri Party after former President Park Geun-hye’s impeachment. He then established the Bareun Mirae Party. He ran for Seoul mayor, but failed to win, and left for Germany for his studies.

In the Seoul mayoral by-election held last year, Ahn again merged his campaign with the eventual winner, Seoul Mayor Oh Se-hoon, after losing a primary. It was the first time for Ahn to step down from an election following a primary.

Then came Ahn’s latest withdrawal in this year’s presidential election. After months of rumors about a merger between Ahn and Yoon Suk-yeol from the main opposition People Power Party, Ahn finally stepped down from the race less than a week before Election Day, announcing his support for Yoon.