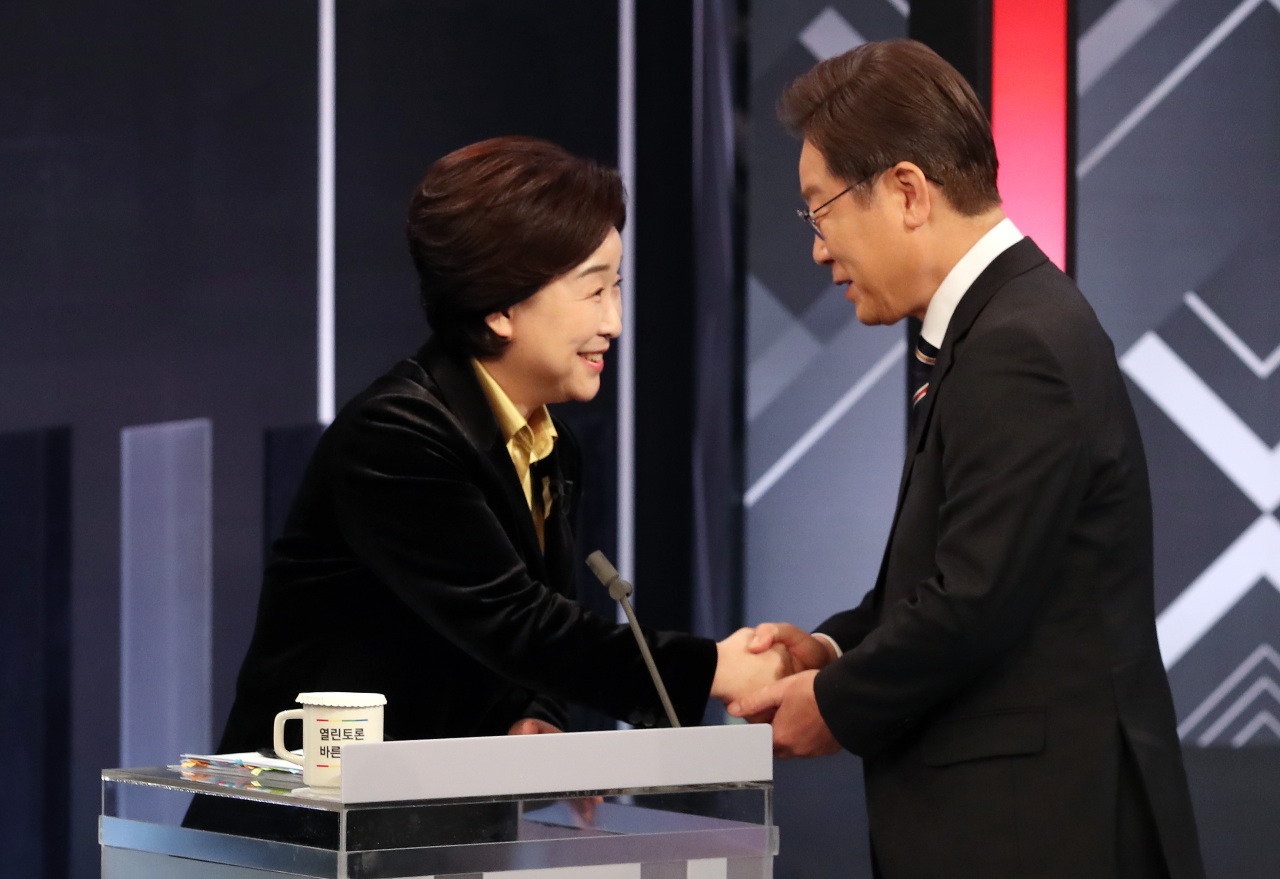 Presidential nominee Lee Jae-myung (right) of the ruling Democratic Party of Korea and Rep. Sim Sang-jung (left), presidential candidate for the minor left-wing Justice Party, shake hands for greeting ahead of participating in a TV debate program Wednesday. (Joint Press Corps)
Presidential nominee Lee Jae-myung of the ruling Democratic Party of Korea said he has no plans to raise more taxes in carrying out his proposed welfare policies, speaking against his own major campaign promise made just months earlier.

During a TV debate held Wednesday, Lee said he has "no plans for any tax increase whatsoever," arguing that the funds needed to finance his state-led welfare policies will be supplied through natural increase in tax income from expected economic growth of the country.

"I will tell you clearly right now that we have no plans for any tax increase whatsoever," Lee said in response to Justice Party candidate Rep. Sim Sang-jung's question whether Lee has any plans for tax increase in unfolding his proposed welfare policies including bringing a universal basic income system.

In making the response, Lee contradicted his past comments on the need to bring tax increase under his welfare vision, undermining the credibility of himself and his set of promises made as a presidential candidate.

Under Lee's vision, all South Koreans would first be given base income of 1 million won ($828.94) a year. Young citizens aged 29 or below will be given 1.2 million won more, and 1 million won will be additionally provided to those aged 60 to 64.

The lowest-earning 70 percent of over-65s will be given up to 400,000 won more each, and those in rural areas will be entitled to 1 million won more a year. All of these funds would be provided for local governments to distribute as cash or spending vouchers.

Lee frequently mentioned that his government will levy taxes on carbon emissions and collect public land ownership tax from land owners to finance the plan, although the move will be preceded by discussions with the general public before being officially implemented.

The ruling party candidate listed his intent to raise new taxes in the official campaign promise guide submitted to the National Election Commission and made available to the public.