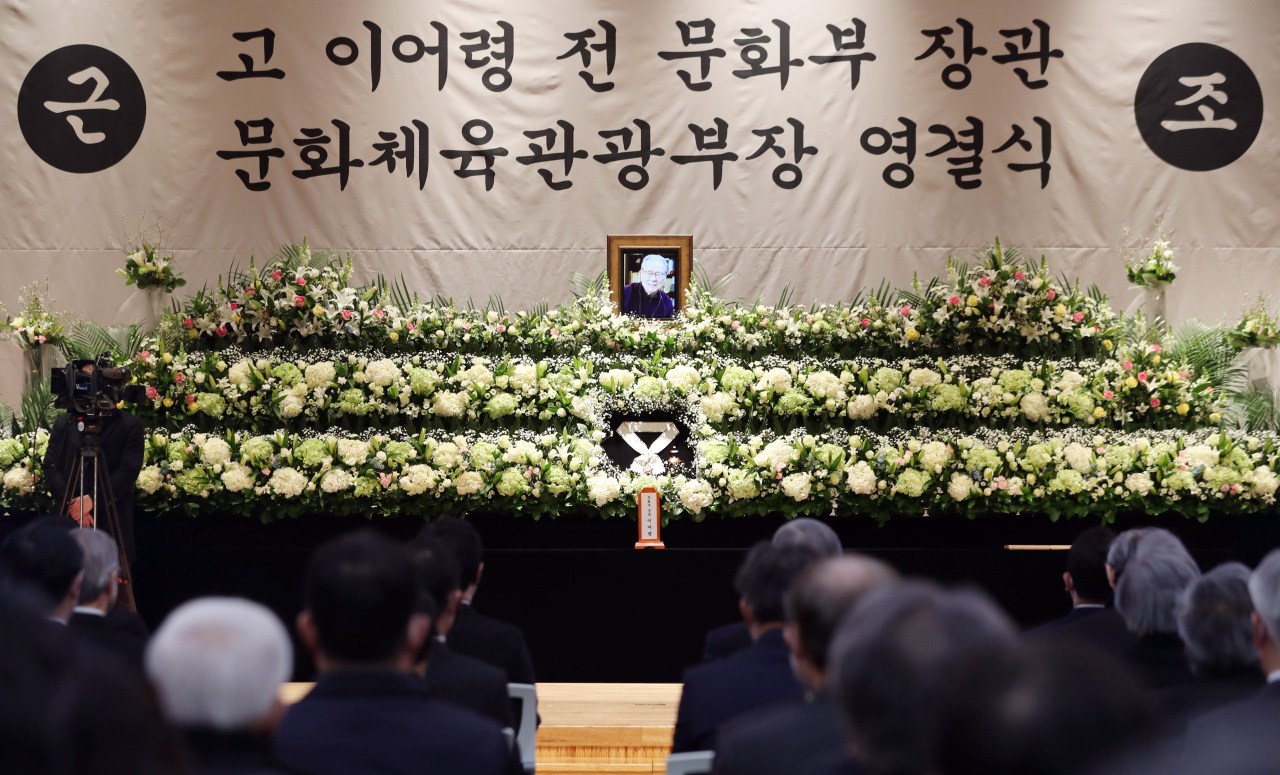 The ceremony was held at the library to commemorate Lee, who devoted his life to writing as an author and played a major role in the development of the library during his tenure as culture minister, according to the Ministry of Culture, Sports and Tourism.

Along with the family of the deceased, more than 250 people including former culture ministers Yoo In-chon, Choung Byoung-gug, Park Yang-woo and Do Jong-hwan and members of the National Academy of Arts, Republic of Korea, attended the ceremony.

The ceremony began with a picture of Lee being carried into the main hall at the National Library of Korea.

After his achievements were briefly announced, Culture Minister Hwang Hee, who has been leading Lee’s funeral proceedings, gave a eulogy, facing Lee’s picture.

“On the first day I took office as culture minister in February last year, I visited Pyeongchang-dong to meet with the deceased,” Hwang said. “The notes in my notebook about the vivid teachings that he gave me with a confident look make my heart ache even more as I send off the deceased today.”

Hwang said that he will remember his legacy, adding that a memorial space for Lee will be created.

Former president of National Academy of Arts, Republic of Korea, and poet Lee geun-bae read a poem he wrote about Lee.

“Lee was a pioneer and practitioner who led the darkness of an era on this Earth to dawn,” poet Lee said. “He will be forever remembered as a Medici that supported the new renaissance in Korea in the 20th century.”

The last eulogy was given by Kim Hwa-young, a culture critic and honorary professor at Korea University.

“In Senegal, the country of the poet Leopold Sedar Senghor, there is a saying that ‘When an old man dies, a library burns to the ground,’” Kim said. “The library of precious memories, knowledge, and creativity accumulated over a lifetime is burning and we are witnessing it helplessly.”

Starting with Lee’s wife, Kang In-sook, who was helped going up to the altar, laid white chrysanthemum flowers at the altar, followed by family members, Hwang and members of the National Academy of Arts, Republic of Korea.

The ceremony ended with cello and Korean traditional music performances by students and professors of Korea National University of Arts, an institution which he established during his tenure as culture minister.

Yoo In-chon, who served as culture minister from February 2008 to January 2011, said “Lee was a symbol of our culture in a way. He is the person that I respect the most, so I feel very sorry.”

“We lost the big teacher of our era,” said Do Jong-hwan, who served as culture minister from June 2017 to April 2019. “He was a leading intellectual, a literary man, and an honorable man who believed in people’s good heart.”

Born in 1933 in Asan, South Chungcheong Province, Lee in 1956 made his sensational literary debut with an article that criticized veteran writers for their authoritarianism titled “Destruction of an Idol,” which was published in Hankook Ilbo newspaper.

After graduating university, he worked as an editorial writer in several newspapers including Seoul Shinmun and Hankook Ilbo from 1960. 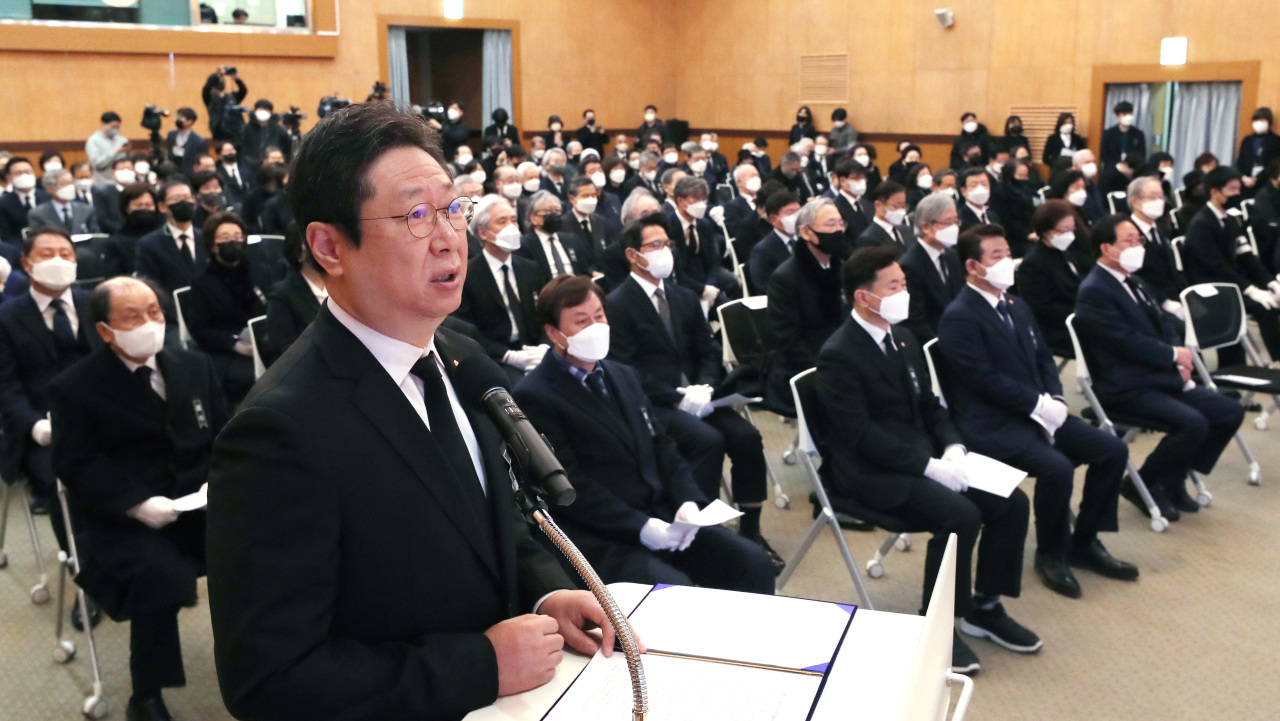 Culture Minister Hwang Hee gives a eulogy while facing Lee’s picture during the official send-off ceremony of the late Lee O-young at the National Library of Korea on Wednesday. (Joint press corps)
In 1966, he started his career as a professor and taught Korean literature at Ewha Womans University in Seoul where he became an honorary professor in 2011.

One of the best-known achievements of his tenure was at the 1988 Seoul Olympics. He directed a special performance of a boy rolling a hoop during the opening ceremony, a scene that many Koreans still recall.

In October last year, Lee was awarded an order of cultural merit for his contribution to the development of the country’s literature.

He also established Young-in Literary Museum with his wife Kang, who currently serves as the director of the museum.

Lee and Kang have three children -- two sons and one daughter.

Lee’s daughter, Lee Min-ah, died of stomach cancer in 2012 at the age of 53 in Los Angeles, while working as a Protestant minister.

Lee was laid to rest at Cheonan Memorial Foundation in South Chungcheong Province.