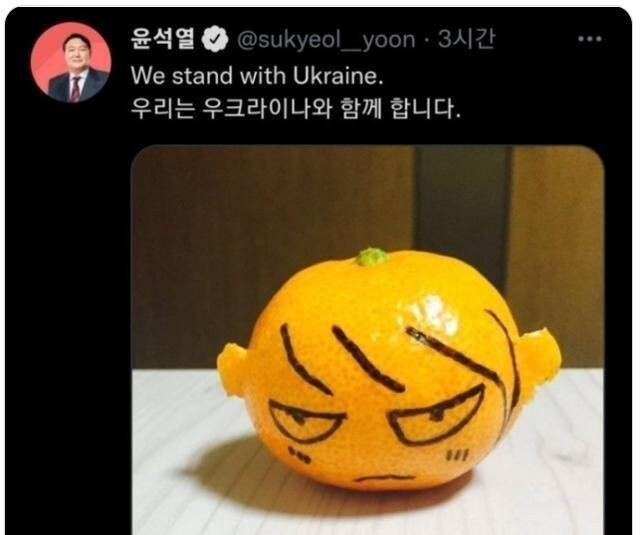 On Monday, a tweet was uploaded on Yoon’s Twitter account with the message, “We stand with Ukraine” in both Korean and English. However, the tweet grabbed public attention not for its message, but for the attached photo: A tangerine with an angry face drawn on with a marker.

The tone-deaf post was taken down three hours later, after it was bombarded with criticisms both in and outside the country. Later in the day, the party explained that the tangerine was meant to recall Ukraine’s Orange Revolution, and point out how the current situation has degraded the value of its hard-fought democracy.

War is not a joke. The thoughtless post from the presidential candidate has not only disappointed Korean voters, but also hurt the hearts of people who are sincerely hoping for the suffering in Ukraine to end.

At the same time, the tweet -- and so many other controversial online posts made by politicians in the past -- point to the political circle’s obsession with going viral.

Social media has undeniably contributed to opening channels for disenfranchised individuals who wanted their voices to be heard, and they act as an efficient means of communication.

The political circle has also been aggressively using online platforms to reach out to voters and woo support, but with clear intentions to create viral content.

On Sunday, the People Power Party Chairman Lee Jun-seok uploaded a photograph of a ballot paper that had an official vote stamp marked next to the rival party candidate Lee Jae-myung’s name on his Facebook.

Saying that the photograph was fabricated without verifying its source, Lee Jun-seok claimed that there is “a hidden force” trying to impede Yoon’s campaign ahead of early voting. The People Power Party chairman’s post appeared to have been an attempt to incite supporters against the ruling party.

But Lee had to take down the post hours later, after it was found that the ballot paper with the voting mark was real, albeit illegally taken by a voter who cast the ballot in Australia. Under local regulations, voters are prohibited from using social media to reveal who they voted for, and from photographing their ballots.

In another incident, Yoon Suk-yeol had shut down his Instagram account after he was criticized for posting a photo of his dog and an apple in October. The posting of the picture of an apple -- a homonym for apology in Korean -- raised suspicions about Yoon’s sincerity in an apology he made earlier for his insensitive comments about former dictator Chun Doo-hwan.

Despite cricitisms, Yoon is unapologetic. He continues to make viral posts and appears to be enjoying the attention, as seen from his series of one-liner Facebook posts of election pledges addressing the national agenda without any further elaboration.

The aforementioned cases of social media usage involving posting incendiary materials or false information, or sometimes lacking in necessary information, is not limited to the country’s main opposition party. It is repeated by other presidential candidates across the aisle.

From covering politics for a couple of years now, this reporter has learned how political parties are often more than eager to create conflicts, because they believe that more noise -- be it good or bad -- is better in all cases.

But that’s not the case. Noise with bad intentions creates harm for society. They also make the people questions to the genuineness of the politicians, fomenting an atmosphere of public distrust.

And politicians, who are empowered by the people to do good for society, should have at least a bare minimum sense of duty not to be perpetrators themselves.

Returning to Yoon’s post about the situation in Ukraine, the fact that the presidential candidate is keeping quiet about an incident that is directly linked to his campaigning to the public shows his lack of effort as a leader.

If it is not him who made the post, he should have still taken an action to show he is in charge of running his campaign team, rather than avoiding the situation by saying it was the fault of the staff managing his social media.

Due to the nature of these social platforms, it has become easy to make and share viral content.

But politicians, who have been given the authority to make changes in society on behalf of the people, should be genuine about the messages they deliver to the public, on all channels.