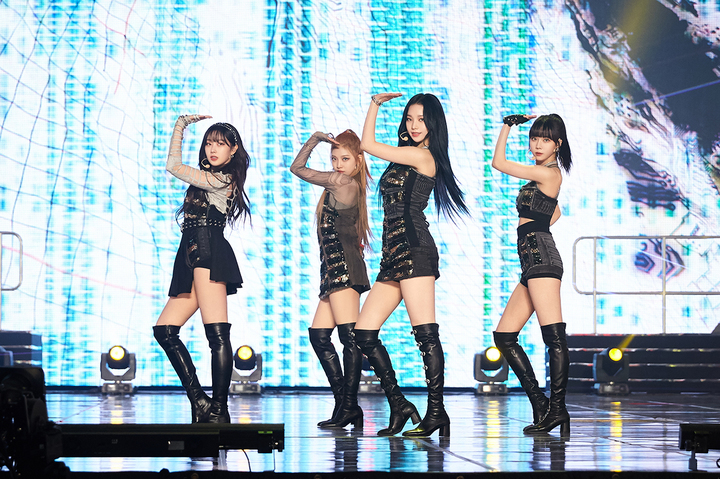 At the annual music awards ceremony held at Nodeul Live House on Nodeul Island, central Seoul, Tuesday, the quartet took home the song of the year award for its megahit “Next Level,” which dropped May last year.

After its debut in November 2020 with the single “Black Mamba,” aespa has generated a buzz in the K-pop industry with its unique concept -- the members also have alter egos in the virtual world, or metaverse.

The single “Next Level,” is a rearrangement of the original soundtrack from the 2019 action film “Fast & Furious Presents: Hobbs & Shaw.”

In their acceptance speech, the members of aespa thanked those who made covers for “Next Level” and followed the song’s signature dance move that looks like a shape of the Korean consonant digeut. They said they would continue to sing higher quality songs and work harder this year.

BTS claimed artist of the year thanks to their Billboard chart-topping songs “Butter” and “My Universe.” It marked the boy band’s third time winning the award. It won the award in 2018 and 2019.

Punk rock band Crying Nut’s Han Kyung-rock and Korea Jazz Guardians won a special award given by the selection committee in recognition of their work designing albums and performances to promote the local music industry amid the pandemic.

The Korean Music Awards focuses on artists’ musical achievements as the primary criterion, unlike other local music awards that determine each year’s winners based on singers’ popularity and album and song sales figures.

The annual awards recognized winners in 25 categories this year for albums and songs released here from December 2020 to November last year. A panel of music critics, radio show producers and music industry professionals determine the winners.