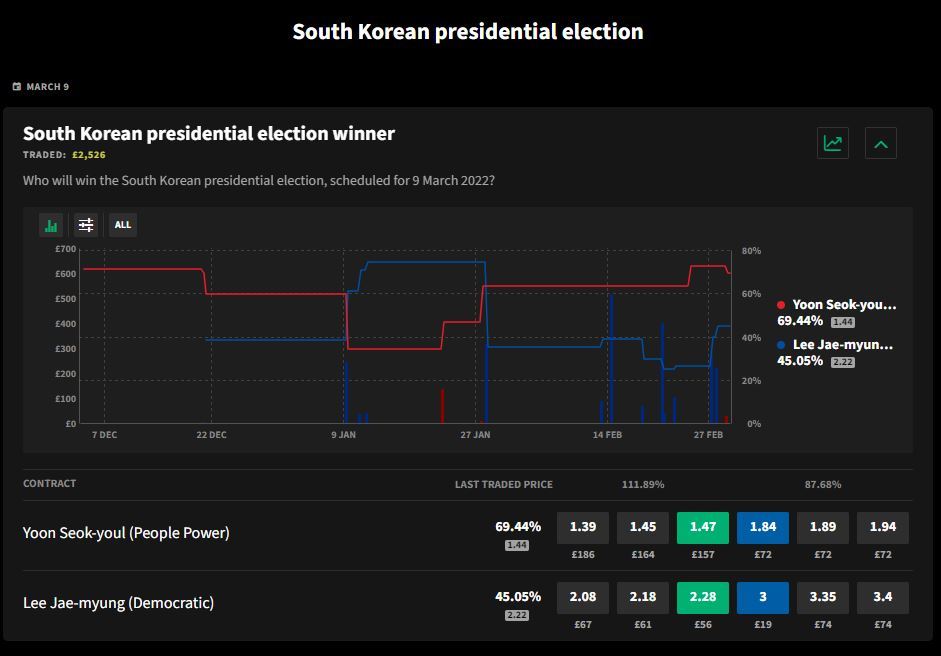 View of a betting page on Smarkets for South Korea‘s 20th presidential election as of 11:30 a.m. Wednesday. (Screen capture from Smarkets website)
A London-based betting exchange running a live prediction of the 20th presidential election for South Korea showed the main opposition party candidate with a higher chance of winning the race against his ruling party rival as just a week remains before Election Day.

As of 2:30 p.m. Wednesday, a betting page for the South Korean presidential election on Smarkets predicted presidential nominee Yoon Suk-yeol of the main opposition People Power Party at 69.44 percent chance of winning the election against 45.05 percent for his rival Lee Jae-myung of the ruling Democratic Party of Korea.

The page opened in April 2021 where Yoon started with odds of 71.43 percent versus Lee with 38.17 percent. Odds for Lee surpassed that of Yoon in early January but fell down later that month, and Yoon has been maintaining higher odds than Lee until Wednesday.

The betting platform says in its guide posted online that "betting exchanges do not predict the future, but instead suggest what chance an outcome has of occurring."

Smarkets has gained popularity in making political predictions after its forecast on the 2020 US presidential election outperformed the leading poll-aggregation models. It successfully predicted the outcome of 49 out of 50 US states in the election.

The betting exchange is also known for correctly predicting the outcome of the 2016 United Kingdom European Union membership referendum, and it correctly predicted the ruling Democratic Party of Korea and its satellite party to win a majority in the 2020 parliamentary elections.