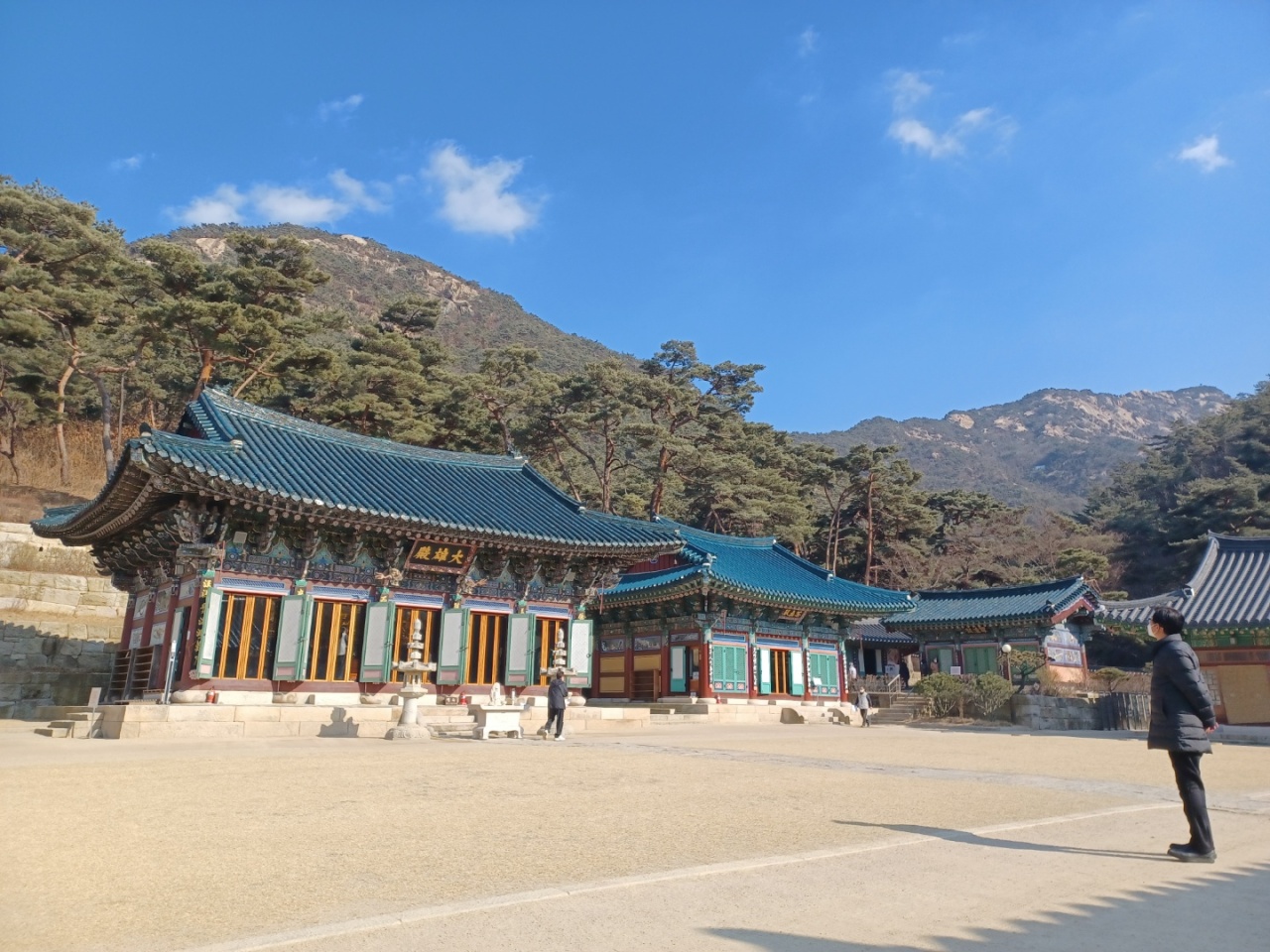 The main hall of the Jingwansa in Eunpyeong-gu, northern Seoul (Lee Si-jin/The Korea Herald)
Amid the seemingly never-ending COVID-19 pandemic, watching the latest Netflix series and eating sweet and juicy mandarin oranges curled up with an electric blanket has been a popular way to spend the winter weekends.

But as the cold winter air starts to make way for the arrival of spring, many hikers are eager to greet the coming spring and enjoy the last cold snap on Eunpyeong Trail, better known as Eunpyeong-gu Dulegil or section eight of the Bukhansan Dulegi, also referred to as Gureum Jeongwongil.

Dulegil refers to a circular trail, such as one that goes around the base of a mountain. 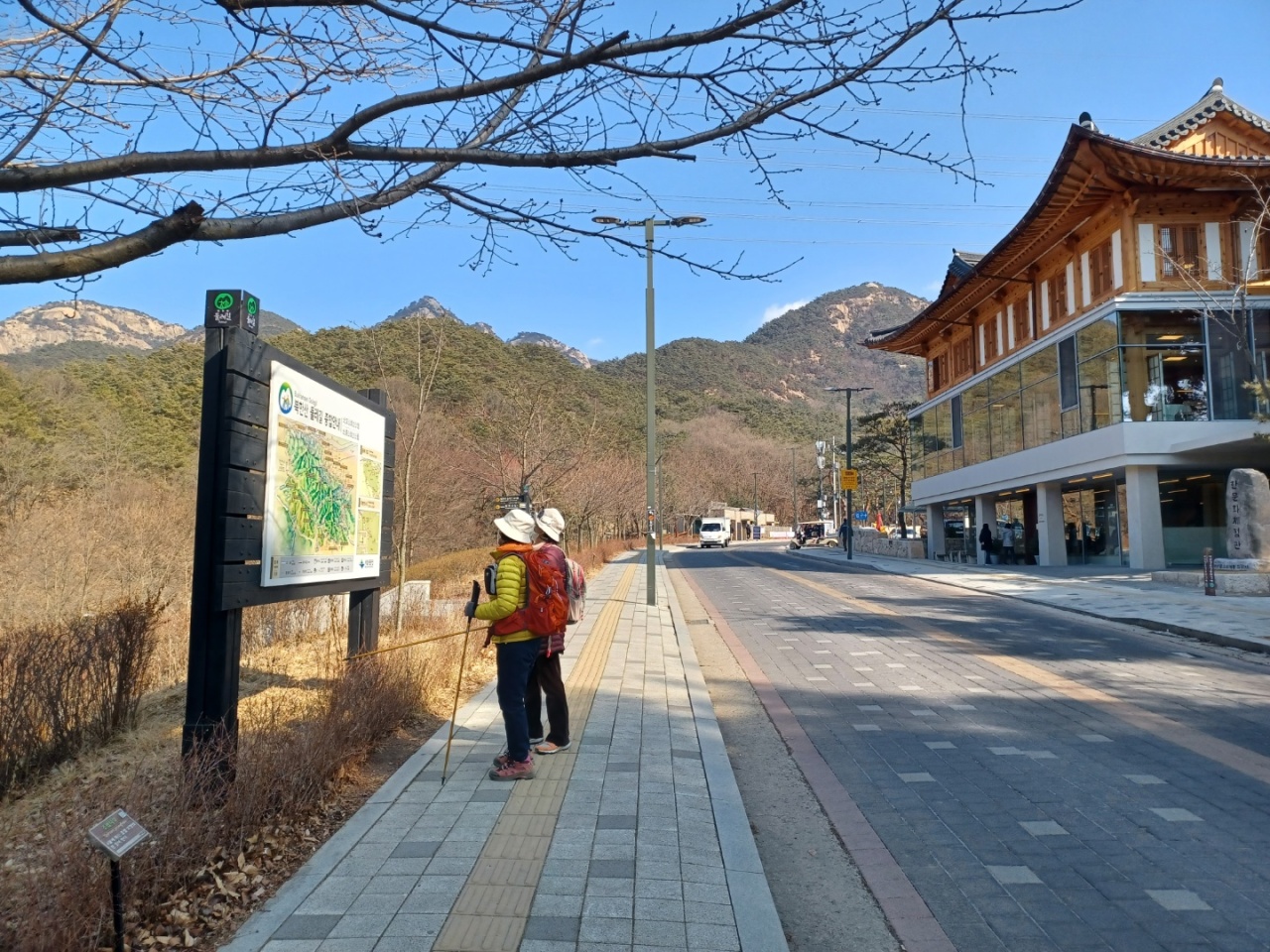 Hikers look at a map before starting their trek at Eunpyeong Trail on Feb. 24. (Lee Si-jin/The Korea Herald)
Located on the outskirts of Seoul, Eunpyeong Trail is a relatively easy hike and offers a stunning view of the surrounding lush forest.

While the trail has five different paths each with its unique charms, the fourth course is most popular for its 7.5-kilometer jaunt on which culture and nature’s beauty can be amply enjoyed.

Though the flowers have yet to bloom, hikers get out of their cars, tie their shoelaces tight and start the walk from a parking lot near Jingwansa in Eunpyeong-gu, northern Seoul.

Located at the entrance to the gorgeous forested path, the temple, a 15-minute ride on bus No. 7723 from Gupabal Station Exit 3 on Subway Line No. 3, is the favored starting point for many trekkers.

Without leaving the city, high-rise buildings and the noise of traffic are replaced by a breathtaking view of Bukhansan, the tinkling of a temple bell and the chirping of birds.

After following the stone walkway from the main hall of the temple, hanok, or traditional Korean houses, greet visitors with a serene, quaint landscape and calm atmosphere. After 10 minutes following signs for Eunpyeong Trail, a wooden gate indicates the entrance to Gureum Jeongwongil. 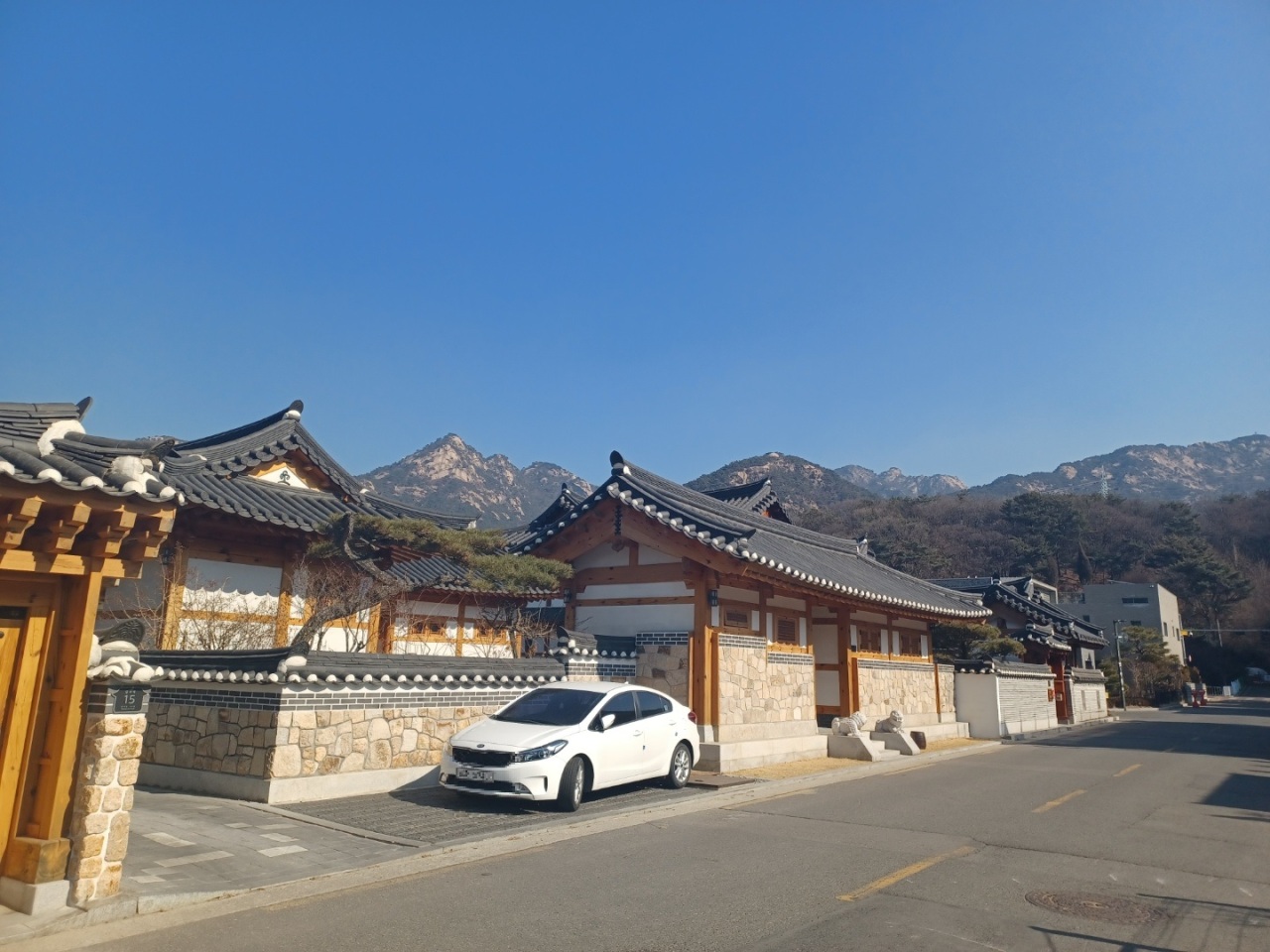 Residential area of Eunpyeong Hanok Village (Lee Si-jin/The Korea Herald)
The dried, crinkled, pale yellow and brown leaves that litter the path recall the fall season, as hikers can take in the naked trees as they prepare to dress in green for the coming spring.

“If you want to exercise and feel the fresh air at the same time, walking along Eunpyeong Trail to the ‘Rose Garden’ (possibly your final destination for the trekkers on course No. 4) is a good choice for immersing yourself in nature,” a retired office worker surnamed Park, 65, told The Korea Herald on Feb. 24. 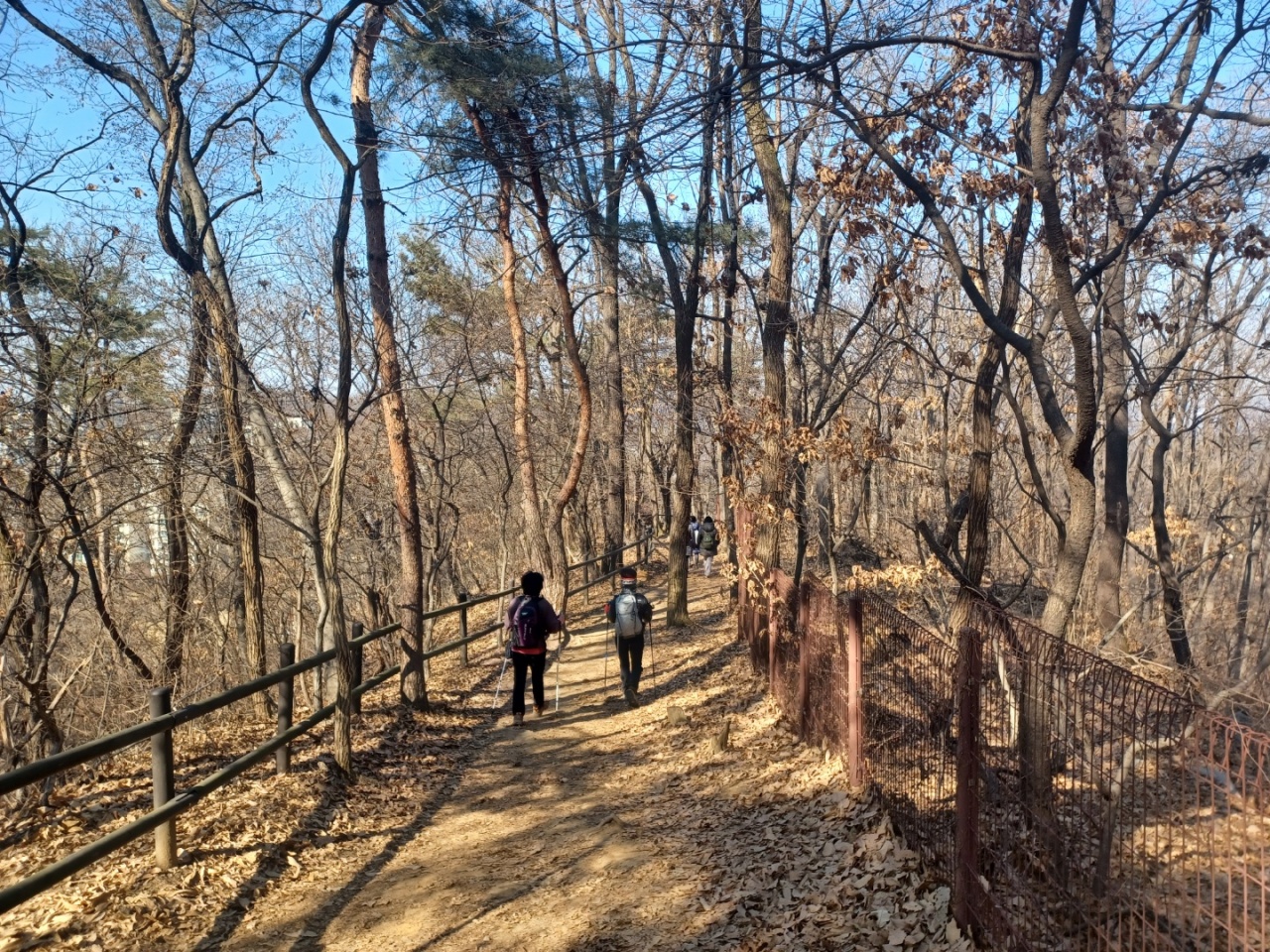 Crisp leaves recall a scene of the fall season at Eunpyeong Trail’s forested path. (Lee Si-jin/The Korea Herald)
“I read in the news that hiking is a hip culture among millennials. But starting out hiking without any preparation might strain the body and lead to unexpected injuries. Maybe walking along Eunpyeong Trail can be an option for the beginners to get a grasp of hiking and enjoy the beauty of Bukhansan,” said Park, who tries to hike twice a week.

Unlike many other courses where people can be seen breathing heavily with their eyes stuck on the ground as they trudge uphill, many hikers here share their daily lives with companions and hum along to songs playing on wireless earbuds.

Some try to feel the fresh winter breeze without a mask, keeping it ready to cover up again when they see a person approaching from the opposite side. Instead of taking photos, most try to take in the landscape as they stroll along the trail.

Signs can be spotted every 10-15 minutes to prevent people from getting lost.

At the end of the forest trail, a residential area around Bukhansan Ecology Park comes within view, signaling the Rose Garden. 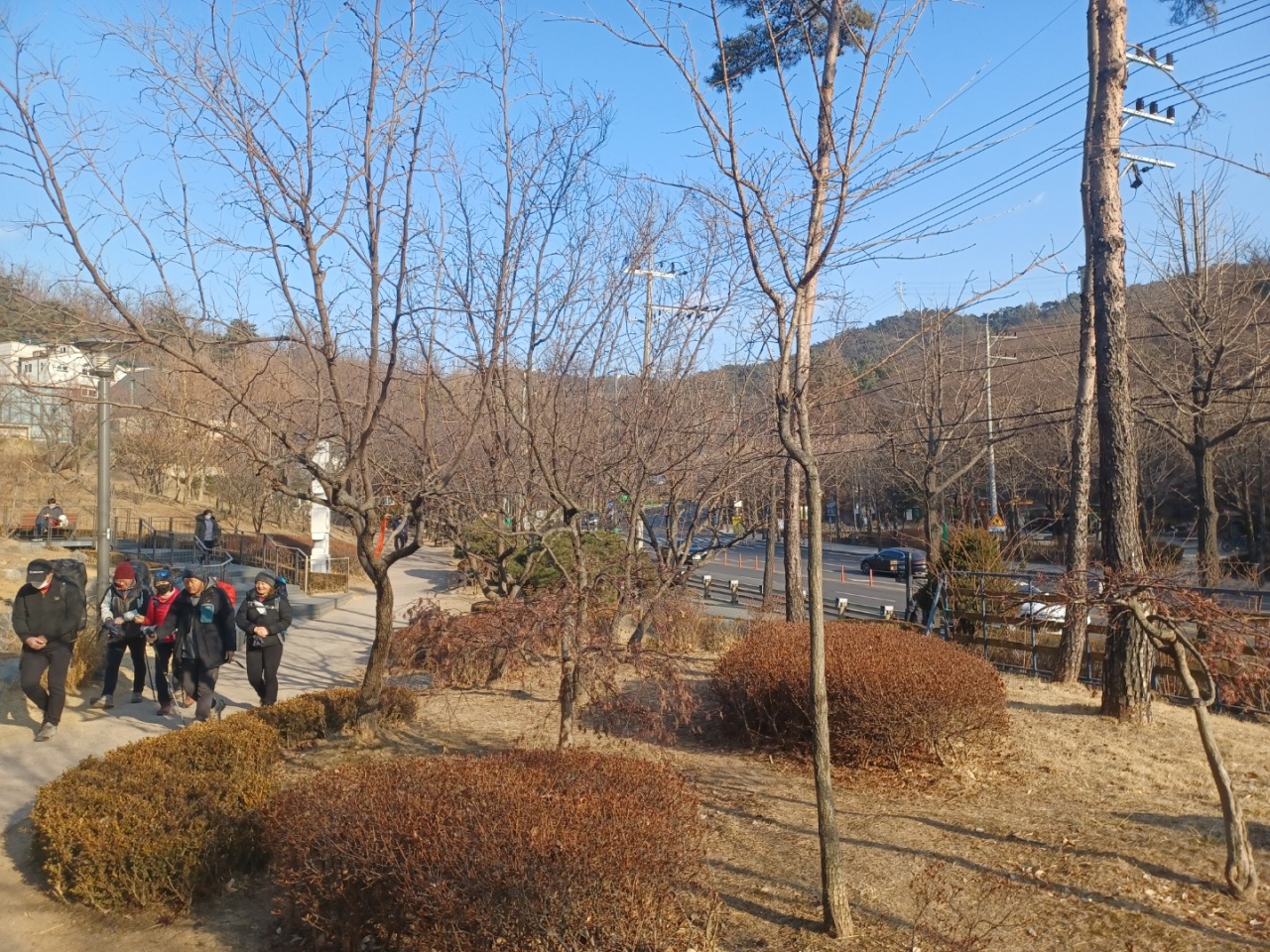 Hikers are seen at Bukhansan Ecology Park on Feb. 24. (Lee Si-jin/The Korea Herald)
The quiet area soon gets noisy with the sound of the air guns used by hikers at the end of their walk to blow out the dust from the tread of their shoes and pants.

If you are not too tired after the 7.5-kilometer hike, you may wish to top it by climbing some 200 steps for a mesmerizing view of Bukhansan. 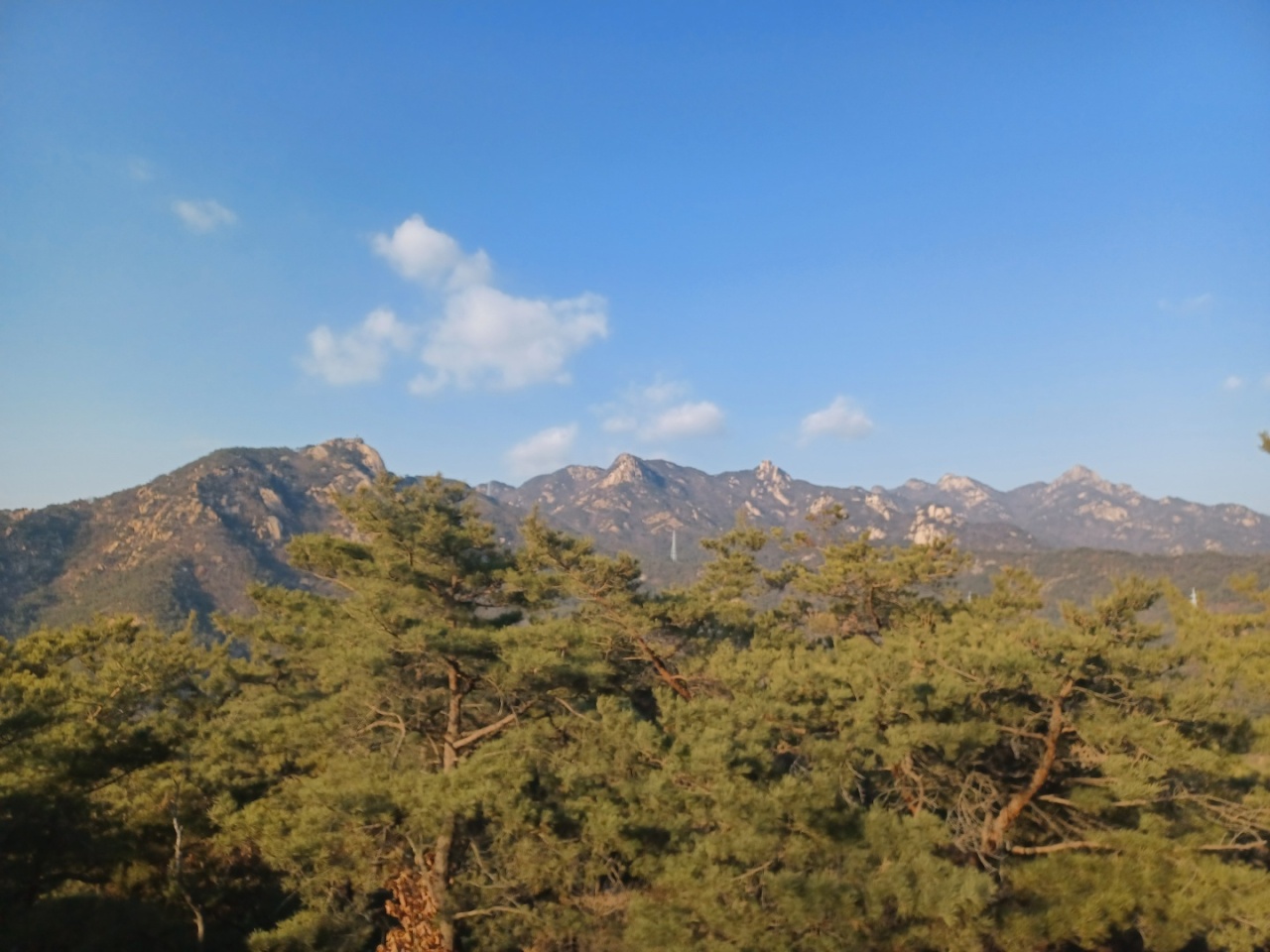