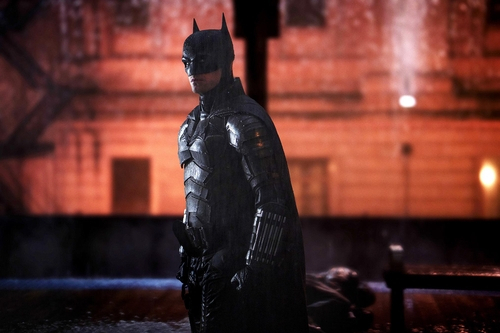 This photo provided by Warner Bros. Korea shows a scene from "The Batman." (Warner Bros.)

"The Batman" has set the best opening-day record for this year to date at the South Korean box office with more than 190,000 people, data showed Wednesday.

The Hollywood action blockbuster sold 192,000 tickets, which is 74 percent of all tickets sold at movie theaters nationwide, on Tuesday and topped the box office the following day, according to the data from the Korean Film Council (KOFIC).

In December last year, Marvel's superhero movie "Spider-Man: No Way Home" attracted 630,000 moviegoers on the first day, the best opening-day record for a film since the COVID-19 pandemic began.

Set in his second year into his crusade against Gotham City street crime, "The Batman" directed by Matt Reeves and starring Robert Pattinson follows Bruce Wayne as he faces the truth about the murder of his parents while solving clues left by a serial killer called the Riddler. (Yonhap)