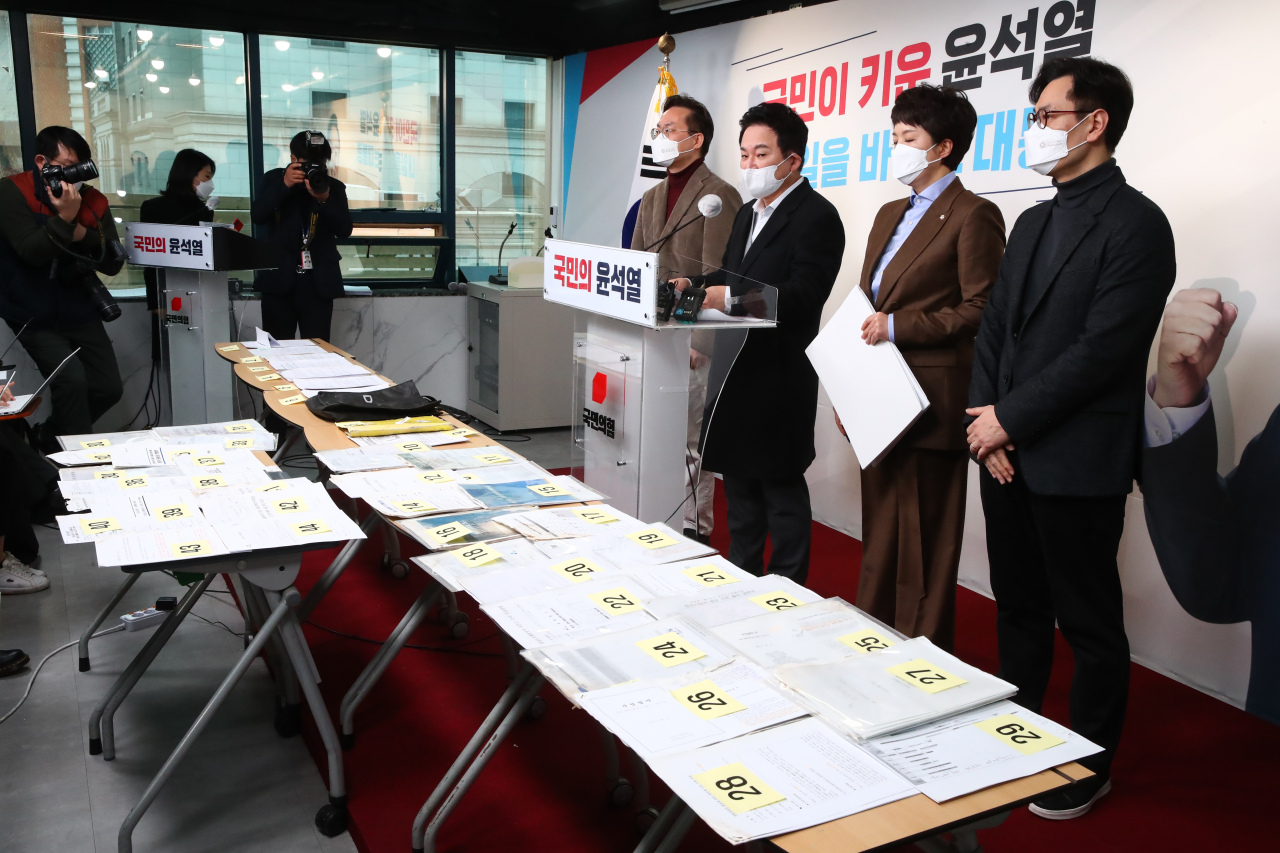 Officials with the presidential election campaign committee of the People Power Party hold a press conference Monday at the party's headquarters in Yeouido, western Seoul, where they unveil newly obtained documents on the controversial Daejang-dong development scandal. (Joint Press Corps)
Former Jeju Province Gov. Won Hee-ryong is unveiling documents on the controversial Daejang-dong development project, alleging that presidential nominee Lee Jae-myung of the ruling Democratic Party of Korea was the mastermind behind the whole project.

During a press conference held Monday at the headquarters of the main opposition People Power Party, Won unveiled a series of documents that Won claims directly link Lee to the scandal, as seen from his hand-written signature.

Won said the documents were public paper forms previously not unveiled to the public, as they seem to be shared behind the doors between key officials with the Daejang-dong development project. Won and other presidential election campaign officials with the main opposition party plan to present the documents to the prosecution to aid its ongoing probe into the case.

"These are public documents sent back and forth between key officials, not advertisements or announcements shared with the public," Won said in the press briefing.

"These are filled with information that wouldn’t be available to others than those involved."

The former Jeju Province governor, who is now a senior member of the campaign team for Yoon Suk-yeol, said these documents are not in the hands of the prosecution, as he claimed that the only documents prosecutors have are official records obtained from the server of related government agencies.

"The only documents that the prosecution submitted to the court are those found on the electric server of the Seongnam city government," he said.

"But these documents, along with other memos, were hidden elsewhere and only found recently. The prosecution didn’t even know of their existence."

Won added some of the documents contained several records of trial proceedings involving Lee, including but not limited to his trial defense tactics, business cards and relevant tax records.

The People Power Party reportedly obtained the documents after an anonymous person reported finding a black bag by a sewer next to a highway connecting Anyang and Seongnam of Gyeonggi Province. Some of the documents were wet or damaged, but Won said most of the secured documents contained crucial information on Lee’s involvement with the Daejang-dong project.

Won has been at the forefront of cracking down on the Daejang-dong scandal as a key member of Yoon’s presidential election campaign committee.

A prosecutorial investigation began in September from allegations that Lee, then the leading presidential candidate for the ruling camp, gave business favors to Hwacheon Daeyu in 2015 to help the firm take part in a land development project in Seongnam’s Daejang-dong when he was mayor of the city.

He is accused of unlawfully aiding Hwacheon Daeyu with capital of 350 million won and gaining more than 400 billion won in dividends.

Lee has denied all allegations made against him and testified in multiple occasions that he was not aware of the key informants and officials involved in the case, saying the only misdeed he might have is not carefully monitoring the corruptive acts done on his watch.