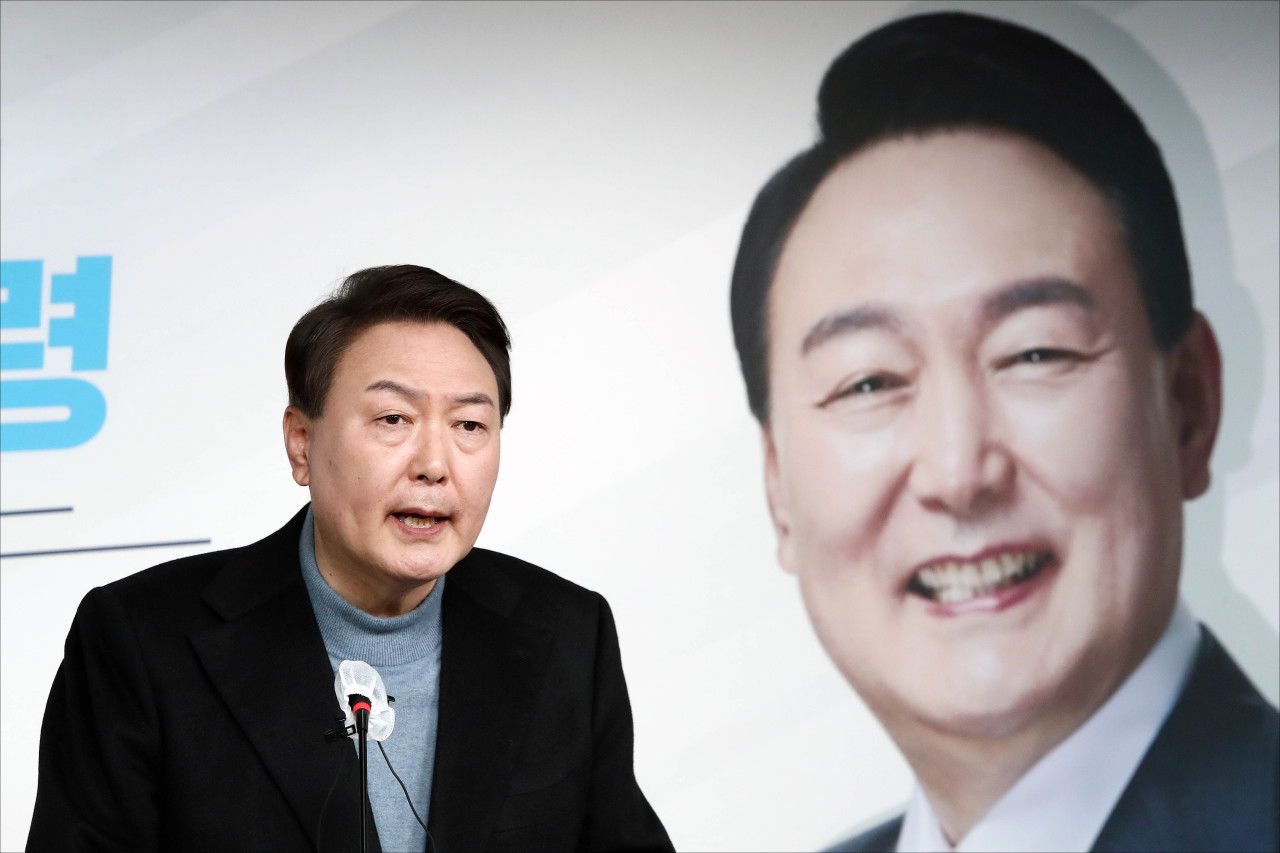 “Until this time, I have been doing my best for candidacy unification with Ahn Cheol-soo, with a sincere attitude,” Yoon said in a press conference Sunday.

“I have made several calls and sent text messages to deliver my stance to Ahn. We also did reach an agreement between the negotiators of the two sides. ... But I was notified the negotiation broke off as a final call at 9 a.m. today.”

The two opposition parties have been talking about merging their campaigns in a bid to cement their victory against the ruling party’s nominee Lee Jae-myung.

Both candidates have been highlighting the importance of “changing the regime” to gain support from voters dissatisfied with the Moon Jae-in administration and the ruling Democratic Party of Korea.

“If Ahn tells me the time and place to meet, when and wherever that would be, I will turn my car to go to him and talk with him. I will not give up my hope to hold hands with him and carry out a regime change,” Yoon added.

According to Yoon, the chief negotiators, Rep. Jang Je-won of Yoon’s People Power Party and Rep. Lee Tae-kyu of Ahn’s People’s Party met several times on Saturday and throughout the night until dawn on Sunday to reach an agreement on merging the campaigns.

The two sides were discussing dates and place for the two candidates to meet and finalize their unification.

“And then, Ahn’s side requested for us to take actions to justify Ahn’s withdrawal (of candidacy) to the public since he has been saying he will finish the presidential race on his own,” Yoon explained.

“I said I will visit Ahn’s house and show him respect. But then I did not get a response on my suggestion, and then I was told Ahn had left for Mokpo (to campaign),” Yoon said, referring to the city in South Jeolla Province.

On Feb. 13, Ahn made an open suggestion to Yoon to unify candidacies and run a public survey to let the public decide which of them would run in the presidential race. After a week, Ahn withdrew his proposal, citing Yoon’s “ignoring” attitude.

Acknowledging how the main opposition People Power Party had shown “lukewarm” attitude in public on merging the campaign with Ahn, Yoon explained the party has actually been making sincere efforts to reach a deal with Ahn.

“The reason why I did not openly talk about the campaign merger is because I thought that would not help the negotiation, and I sincerely want the merger,” Yoon added.

The main opposition party also released a four-page document listing their negotiations with Ahn’s bloc since early February, to claim they have made efforts for campaign merger behind the scenes.

While Yoon did not reveal the details of their negotiations, he said they did not discuss conducting a public survey for the campaign merger in any of their meetings.

After the press conference, Yoon departed for Pohang in North Gyeongsang Province to resume his regional canvassing. He had canceled all previous activities. 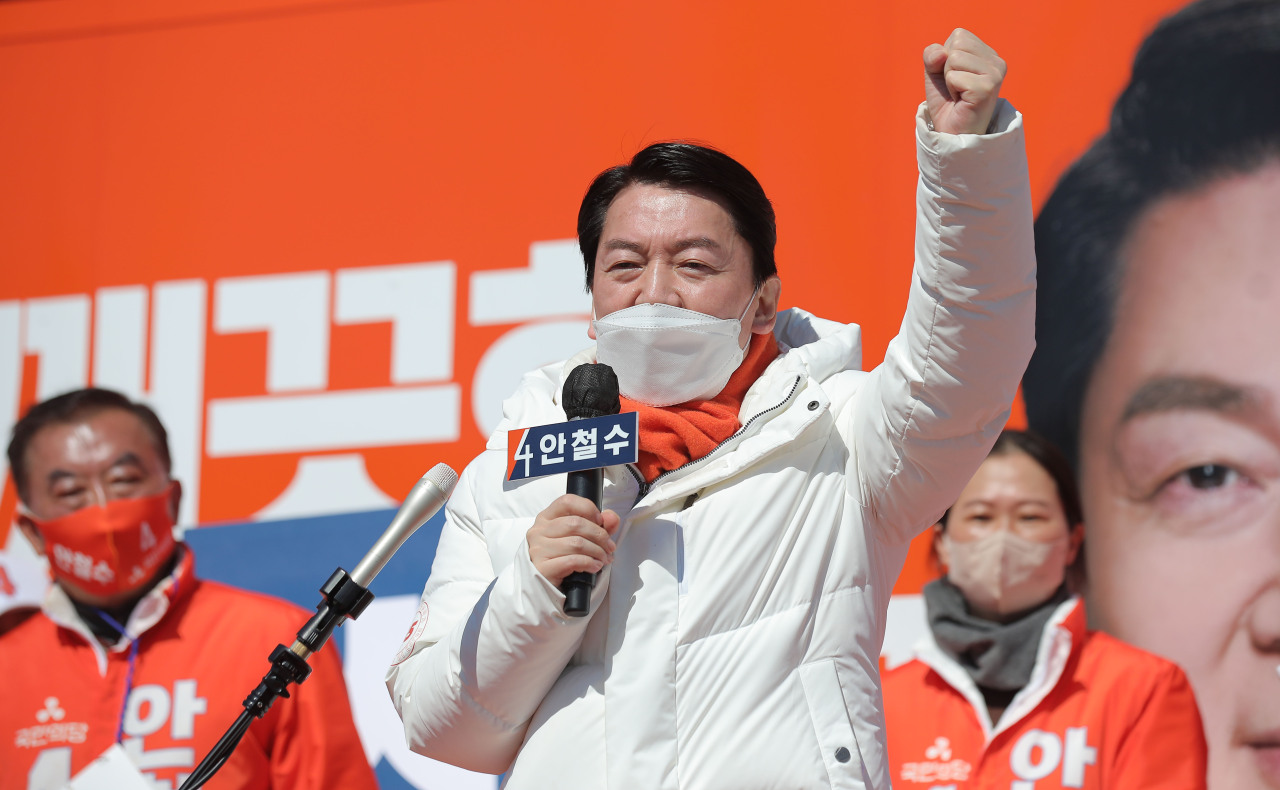 Presidential candidate Ahn Cheol-soo of the minor opposition People’s Party speaks at a campaign event in Suncheon in South Jeolla Province on Sunday. (Yonhap)
Following Yoon’s revelation, Ahn countered that he did not receive any response from Yoon on his initial proposal for a public survey.

“And then yesterday, they suggested for a discussion, and we decided to hear them out. But we have concluded what they suggest is not worth our consideration,” Ahn told reporters during his canvassing in the afternoon.

“I have been consistantly asking for a public survey (to decide on one candidate) but they have not given any answers to this request. We did put it on the table, but if they say it was not on for negotiation, they are showing no respect to their negotiating partner.”

Rep. Lee Tae-kyu, the head of Ahn’s campaign committee, also released a statement to admit his party was “right” to be doubtful of Yoon’s intentions for campaign merger, and that, the Sunday’s press conference has confirmed that Yoon’s party cannot be trusted.

“It was Yoon who demanded our negotiations be strictly done in secret. And then, Yoon now opens it all up, saying he is so sincere about the campaign merger,” Rep. Lee said in a statement.

“Lack of trust was the reason why the negotiation failed, and today’s conference proves that Yoon’s faction is capable of doing anything to avoid responsibility.”

From early Sunday, Ahn carried out with his scheduled activities in Mokpo.

There, Ahn had explained how he was bombarded with calls and text messages from Yoon’s supporters, and could not receive calls from Yoon.

“It is almost impossible to use the phone. The phone is really hot, and I see there are almost 20,000 text messages and calls. How should I understand their method to stop me from using my phone?” Ahn said.

On Saturday, Kim Chong-in, a veteran politician who headed the campaign committee for Yoon Suk-yeol before it disbanded, criticized Yoon for not taking Ahn Cheol-soo’s suggestion for campaign merger early on.

“If Yoon really needed the campaign merger, they should have taken Ahn’s suggestion right away. Now (the People Power Party) is under time pressure,” Kim said in an interview with JTBC.

“Ahn already declared his stance (to not pursue campaign merger). (The People Power Party) had to resolve that conflict but instead kept hurting Ahn’s pride and the negotiation becomes more difficult.”

Kim also pointed out that Yoon has misplaced confidence that he can win the presidential election on his own, after only hearing praise from his aides.

“Too much time has elapsed, I do not think it will be easy for them (to unify the candidacy before the election on March 9),” Kim added.

In the latest survey by Embrain Public commissioned by News1 on Sunday, Yoon posted a 42.4 percent support rating to stand ahead of other candidates, as Lee followed with 40.2 percent.

Ahn stood at a distant third with 9 percent and Sim Sang-jung of the progressive Justice Party garnered 2.8 percent in the same poll of 1,014 adults conducted from Friday to Saturday.