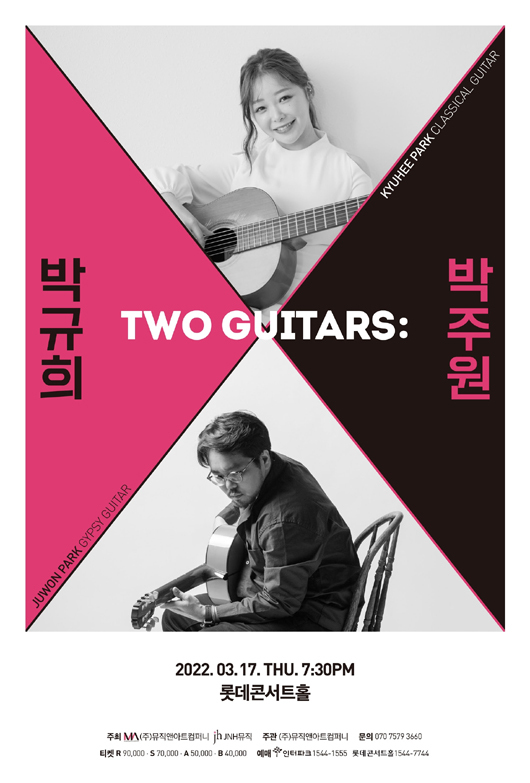 Poster for the upcoming duet performance, “Two Guitars” (Musicandartcompany)
Two leading Korean guitarists from the genres of classical and Latin jazz will meet for a live duet performance this spring.

Titled as “Two Guitars,” classical guitarist Park Kyu-hee and Spanish jazz guitarist Park Ju-won will perform together at the Lotte Concert Hall in Seoul’s Songpa-gu on March 17, performance agency MusicandArtCompany announced Friday. This will be the duo’s second appearance on stage together, following their first in June last year.

In 2008, she won first prize at the Printemps de la Guitare International Competition as both the first female and Asian musician in the history of the competition.

In 2012, Park also swept both the grand prize and the audience prize at the Alhambra International Guitar Competition.

Park Ju-won, 42, is known to critics for his unique guitar arrangement skills and fast-paced rhythmic playing while performing live.

Starting with his solo album in 2009, Park has continuously collaborated with top singers in the K-pop scene while working through six albums. He has collaborated with IU and Lee So-ra, and also recorded soundtracks for popular K-dramas. Fans have called him a “young virtuoso” in the nation’s emerging Spanish guitar scene.

In the first part of the concert, the two will jointly perform various tunes composed and played by renowned musicians, including Sergio Assad’s “Invitation,” and Stanely Myers “Cavatina.” Park’s debut song, “Time of Gyspy,” and “Memory of Winter Days” will be performed during the latter half of the performance.

Ticket reservations for the concert can be made through the Lotte Concert Hall website and Interpark Ticket starting Friday.