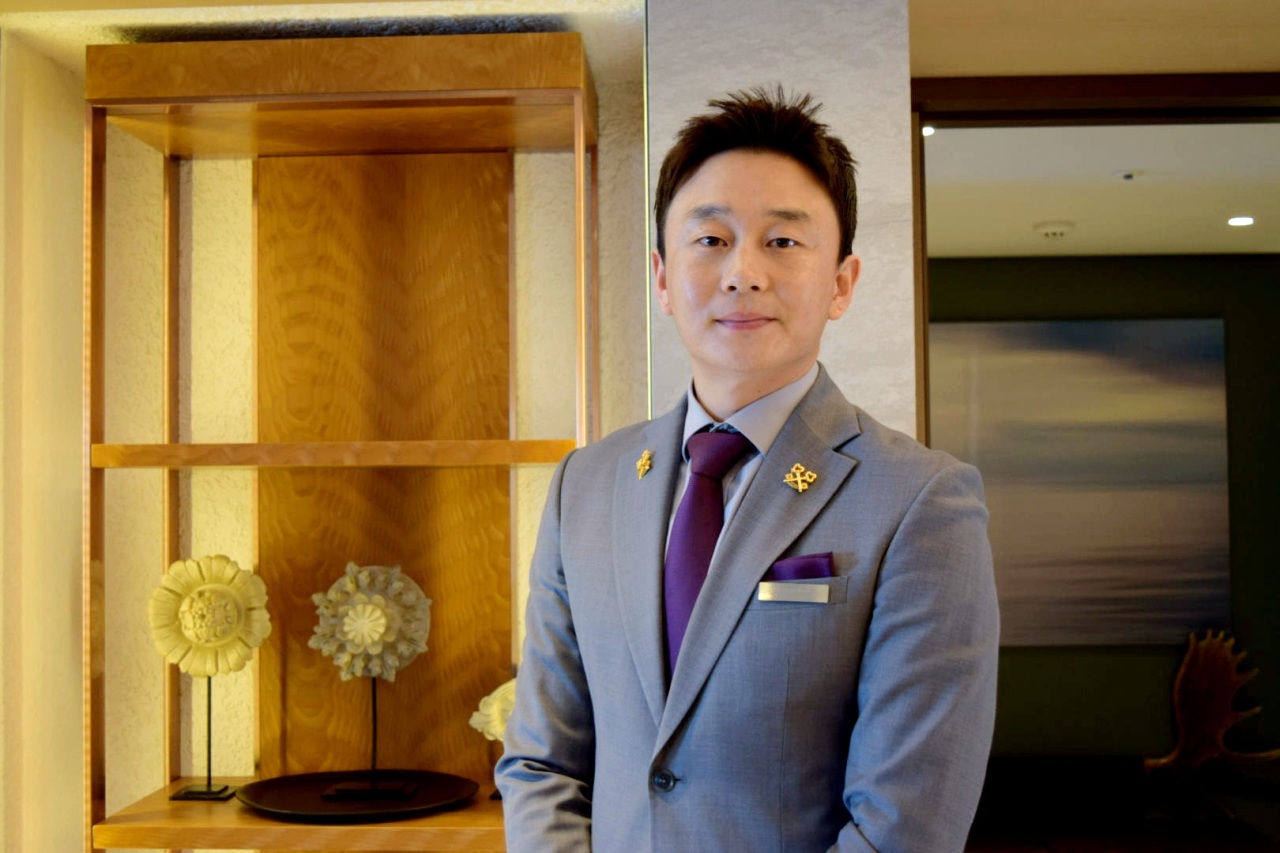 Kum received the Les Clefs d’Or badge of two golden keys on Feb. 14, which symbolizes professional expertise as well as the best and most unique concierge services.

Founded in 1929 by Pierre Quentin, head concierge of the Hotel Ambassador Paris, the organization currently has some 4,000 members from 40 countries. The Korean chapter of Les Clefs d’Or has 29 full members.

“No matter how far IT technology develops for fast and convenient hotel services, I believe face-to-face communication with our guests will make lasting impressions at the end of the day,” Kum told The Korea Herald during an interview three days after officially receiving the honor of Les Clefs d’Or full membership, at the Grand Walkerhill Seoul in Gwangjin, eastern Seoul.

The golden keys that he pins on both sides of his suit are not only a source of pride for Kum, but also a sign of encouragement to his colleagues at the hotel. More importantly, guests notice the keys and expect to be provided with outstanding concierge service, according to Kum.

In his early 20s, Kum worked at various part-time jobs related to customer service and communication. Kum realized that the hotel industry would be a good fit for him when he noticed that he thrived when talking to new people and fulfilling their needs.

Kum applied for the Walkerhill Academy, a hospitality industry training program in 2006. A few months after, he was hired through the hotel’s open recruitment.

“To be honest, I did not apply to any other hotel. I loved the traditions that Walkerhill had kept, and also the surrounding serene environment that stands out from other hotels in the city. I wanted to serve as a hotelier at this specific site,” he said.

One of the concierge services Kum takes pride in is handing out his personal business card to hotel guests. It is a demonstration of his trust in them and his readiness to provide assistance.

“Our hotel’s concierges have a comprehensive list of the best places to dine and visit that has been compiled based on our experiences. We try to give as fresh and the most up-to-date information as possible based on our own navigation.”

Kum’s goals for the coming years is to make the hotel a millennial- and Generation Z-friendly space. As part of this roadmap, the hotel recently launched a social media campaign, “How far have you traveled from Walkerhill?” which guides people to hiking trails around the hotel that connect to the nearby Achasan mountain.

The Walkerhill Theater, which opened in 1963 as a performance and dining space, will reopen in late May as a media installation art center.

Kum hopes that younger generations of guests will freely communicate with the hotel staff for services that they wish to receive at the hotel.

“I have noticed foreign guests coming up to me upon noticing the keys, but no Korean guests so far. I hope more people take advantage of the concierge services while at our hotel.”