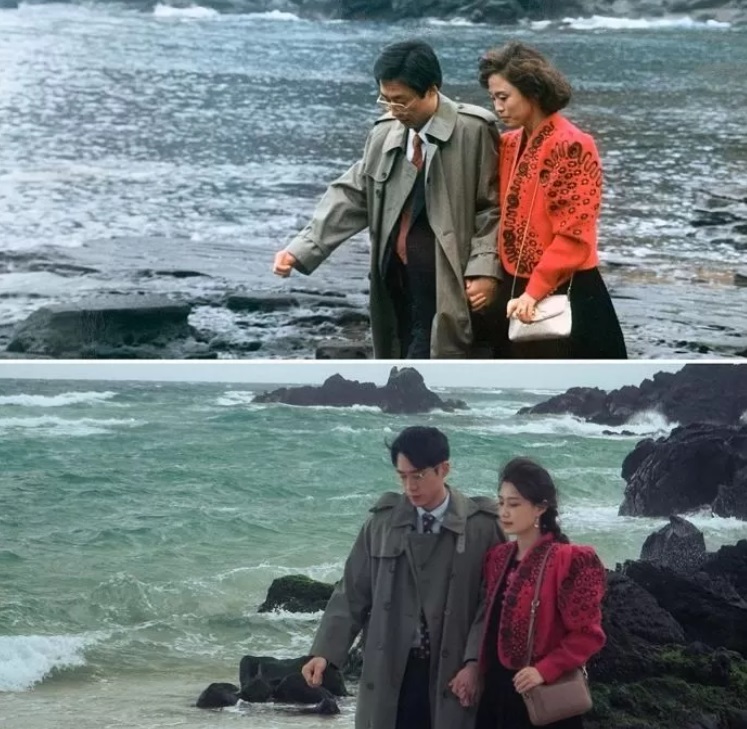 Sohn and his wife re-create a photo of his parents’ honeymoon taken on a beach in Aewol, Jeju Island. (Courtesy of Sohn)
Before Koreans discovered exotic holiday destinations abroad, Jeju Island, the semi-tropical, volcanic island off the south coast of the Korean Peninsula, was the No. 1 honeymoon destination.

But it wasn’t the first choice for Sohn, who tied the knot last October. Like most couples of his generation, his idea of a honeymoon was a once-in-a-lifetime trip to a far-off destination, like the Maldives. But the COVID-19 pandemic made such a trip almost impossible for many.

So to make his wedding trip to Jeju Island more special, he and his wife decided to do something memorable: reenacting photos of their parents‘ honeymoons on the island. 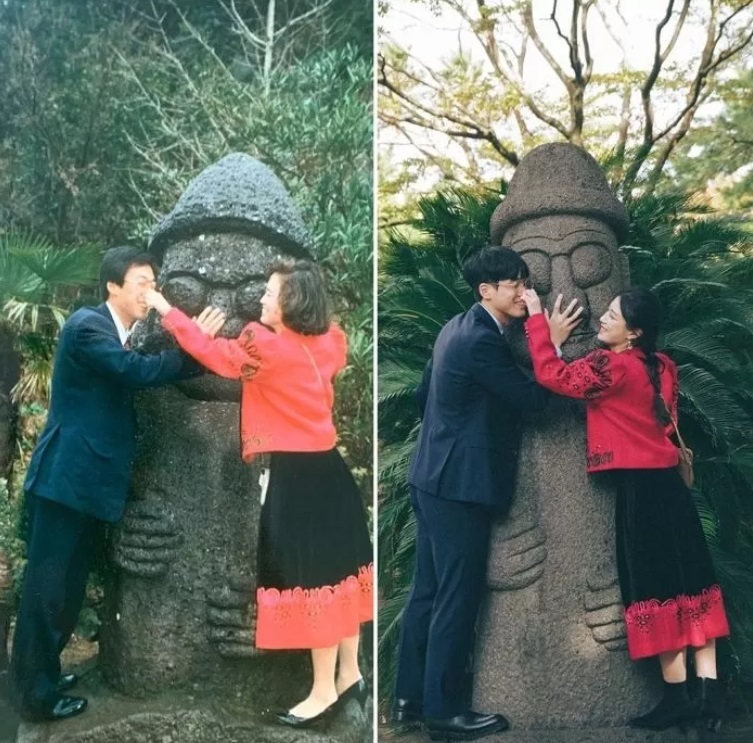 The couple had a lot of fun mimicking the poses and facial expressions of the parents from the old photos, who were around their age back then.

“At the same time, I felt a bit sad that my parents, so devoted to looking after us, didn’t get enough time for themselves. COVID-19 has disrupted my honeymoon plan, but it also presented me with an opportunity to make an unforgettable memory.”

As in Sohn’s case, re-creation photos are emerging as a trendy way of making the pandemic-battered, domestic honeymoon trips special and paying homage to the parents for whom an overseas trip was not a realistic option.

In much of the 1980s, international travel for sightseeing was strictly restricted in Korea, supposedly to prevent an outflow of foreign currency as well as South Koreans making contact with communists.

Before the closed-door policy was completely lifted in 1989, a year after the 1988 Seoul Olympics, Jeju Island and Gyeongju in North Gyeongsang Province, known for its well-preserved historic treasures, were top destinations for Korean honeymooners.

With many couples going on a honeymoon to the same domestic locations, there were even special train tour packages -- the “honeymoon train” -- operated by the Korean National Railroad. 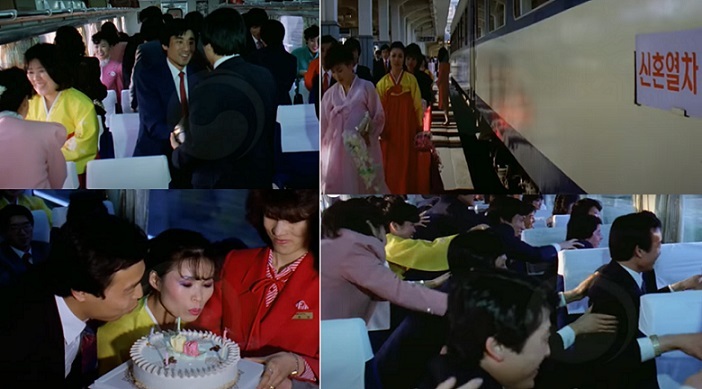 This footage from KTV shows the inside of a “honeymoon train,” where all the passengers were newlyweds.
The parents of Son Jin-young, a 35-year-old office worker living in Gyeonggi Province, were among the passengers on the honeymoon train to Gyeongju in the late 1980s.

In homage to them, Son, who got married earlier this month, traced her parents’ path in the historic city with her husband on their own honeymoon, re-creating their old photos.

“We went to the places from my parents’ honeymoon pictures, including Bomun Tourist Complex and the temple Bunhwangsa, and took snapshots in outfits similar to their style,” Son said. 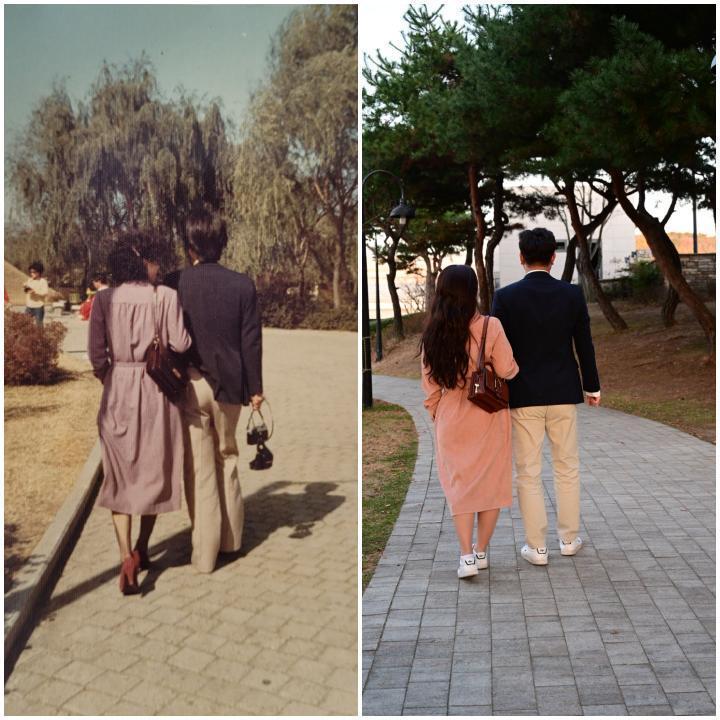 Son Jin-young and her husband re-create a honeymoon photo of Son’s parents in Gyeongju, North Gyeongsang Province. (Courtesy of Son)
“It was fascinating to see how the tourist attractions and nature environment surrounding them have changed over time.”

Aside from the pandemic effect and paying homage to parents, nostalgia for the old days is a megatrend among young people now, experts say. 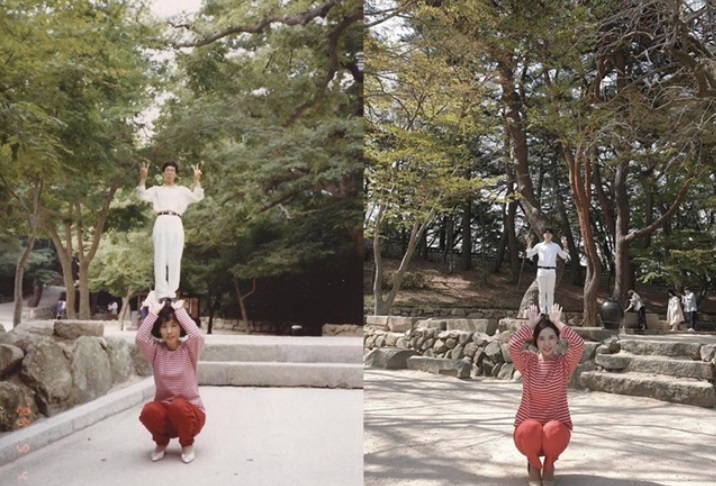 Kim and her husband re-create a photo of his parents’ honeymoon taken near the temple Bulguksa, in Gyeongju, North Gyeongsang Province. (Courtesy of Kim)

“In this time of digital transformation, people are more drawn to an analog way of life, such as reading printed books or using film cameras. The enduring popularity of vintage clothes and other retro fashion items is also attributable to people’s nostalgia,” said Kwak Geum-joo, a psychology professor at Seoul National University.

By copying their parents of decades ago, young people are trying to share in the cultural values of older generations, something unique to humans as a species, the scholar said.