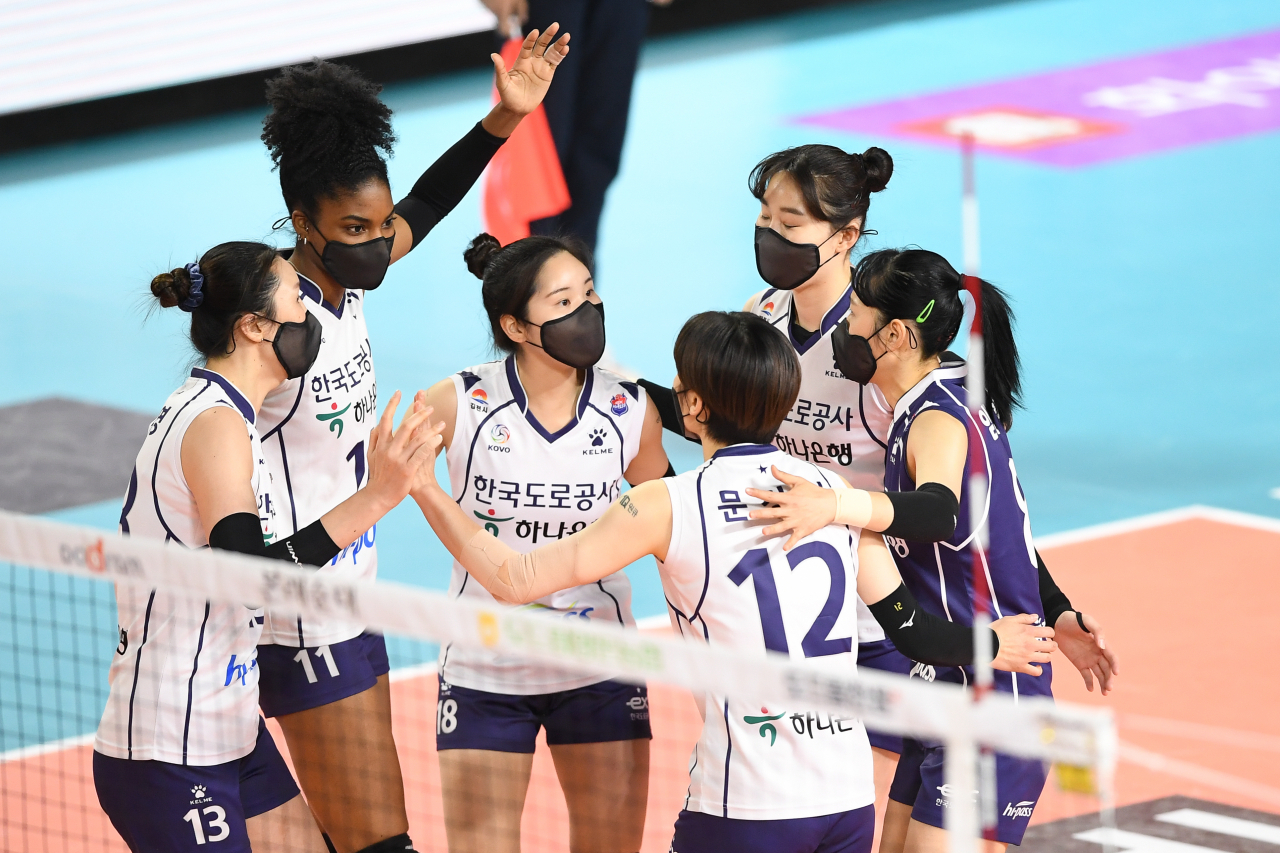 Mask-clad members of Korea Ginseng Corp. women's volleyball team celebrate a point against Korea Expressway Corp. during their women's V-League match at Chungmu Gymnasium in Daejeon, some 160 kilometers south of Seoul, on Monday, in this photo provided by the Korean Volleyball Federation. (KVF)

A surge in coronavirus cases has been wreaking havoc on playing schedules in South Korean professional sports this month, an eerie deja vu to previous springs when seasons were postponed or even canceled outright at the onset of the pandemic.

The top two divisions in pro football just had their first weekend of the season, and it's the volleyball and basketball leagues, with their seasons in full swing for months, that have been hit the hardest.

The Korean Volleyball Federation (KOVO), which runs the men's and women's V-League, scrambled to postpone multiple games in both competitions this month due to outbreaks among clubs. Seeing players with masks on for full matches has become a common occurrence this month.

On the men's side, COVID-19 hit two clubs, the Korean Air Jumbos and Hyundai Capital Skywalkers, particularly hard earlier in February. They didn't have the minimum 12 players required to play under the league's health and safety protocols, and the season was put on hold last Tuesday.

Under those protocols, the KOVO can suspend the season if two or more clubs have fewer than 12 players available due to a COVID-19 outbreak. If only one club has fewer than a dozen players on hand, then the KOVO can press on with its season while only canceling games involving the team in question.

The KOVO had planned to resume action on Friday. However, on Monday, it pushed the reopening date back by three days, to next Monday.

Just as the Jumbos and the Skywalkers welcomed back players, two other clubs, the KB Insurance Stars and KEPCO Vixtorm, saw several of their players go down with COVID-19.

The Stars have had 10 players diagnosed with the virus, including five on Monday. The Vixtorm added eight players to their COVID-19 list, which now has 11 players.

The men's league will have lost 13 days' worth of regular season games, if it can resume next Monday as scheduled.

If the league remains on hold for between two weeks and four weeks at this point in the season, then the KOVO can choose to shorten both the regular season and the playoffs.

And if the pandemic forces the league to stay shut for more than four weeks, then the KOVO has the ability to call off the rest of the season.

All seven men's V-League clubs have players on the COVID-19 list.

The women's V-League pressed pause on Feb. 12 because of outbreaks among teams, and its season resumed Monday with a game between Korea Ginseng Corp. and Korea Expressway Corp. Every player for Korea Expressway Corp., which once had 13 players test positive for the virus, wore a mask in the game.

The 10-team Korean Basketball League (KBL) had 73 players and 18 coaches infected with COVID-19 as of 5 p.m. Monday. A dozen players and two coaches were newly added earlier that day.

Unlike the KOVO, the KBL had been pressing ahead with its season despite positive tests popping up from multiple teams. The decision drew ire of players, some of whom took to social media to wonder aloud if the league was doing the right thing or if it even cared about players' well-being.

The KBL had a previously-scheduled Feb. 18-March 2 midseason break to accommodate the national team during the Asian qualifiers for the 2023 FIBA Basketball World Cup. Because of rising cases across the league, the KBL began the break two days early.

The league's leaders and teams' general managers will meet on Tuesday to discuss the remaining regular season schedule.

The leaguewide outbreak has also affected the national team's preparation for the Asian qualifiers, which will begin in Manila on Thursday.

The Korea Basketball Association (KBA) had selected 24 players for the team, including 10 on the reserve list. But last Thurday, the KBA cut seven players who had tested positive for the virus.

Three more players tested positive for COVID-19 over the weekend, and no replacements have been named for the ill players.

Under FIBA rules, a team must have at least 10 players available in order to play in the qualifiers.

Teams in the Korea Baseball Organization (KBO) have also seen COVID-19 cases coming from left and right, as they are gearing up for the new season.

As of Monday morning, 26 players and seven coaches had tested positive for the virus in the 10-team KBO. The NC Dinos, in particular, have had nine players test positive over the past five days.

The league sent each team 140 self-testing kits at the start of the annual spring training on Feb. 1.

The preseason will begin on March 12, followed by the regular season on April 2. (Yonhap)