[ The Korea Herald – Send E-mail ]
Much ink being spilled over legal status of tattoo artists in Korea
A galvanizing moment may be coming for licensing and registration system for giving tattoos, which has been outlawed for 4 decades
By Yoon Min-sik
Published : Feb 21, 2022 - 16:54
Updated : Feb 21, 2022 - 16:57 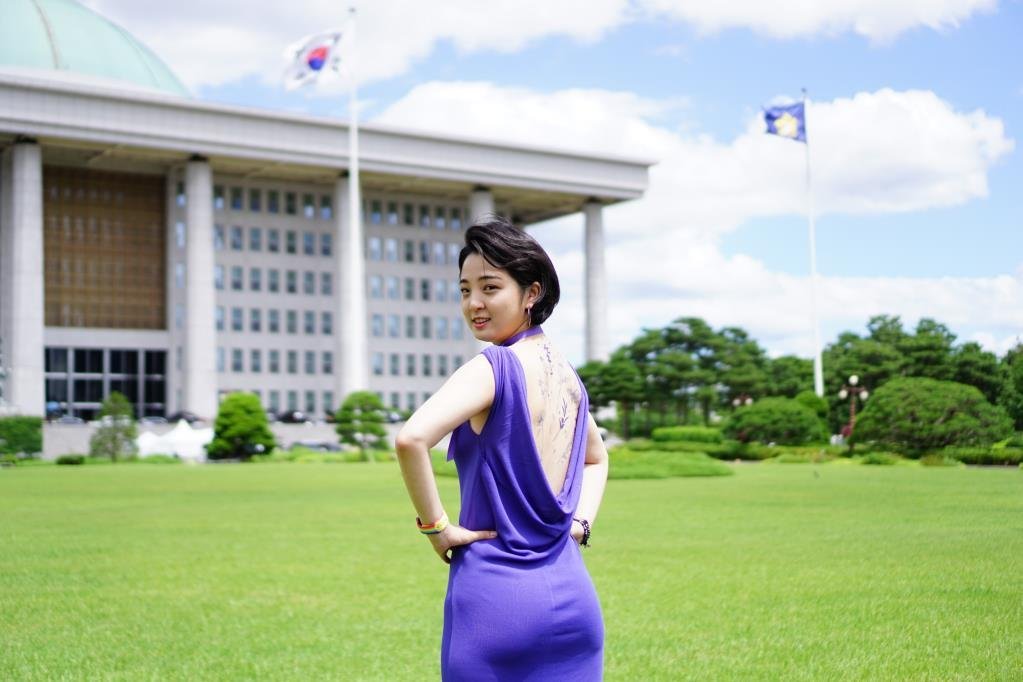 Rep. Ryu Ho-jeong of the opposition Justice Party poses for a photo at the National Assembly on June 21, 2021, showing off her temporary body work in support of tattoos. (Office of Rep. Ryu Ho-jeong/Yonhap)
The National Human Rights Commission of Korea may soon recommend the abolishment of a long-disputed ”tattoo ban“ in Korea, in what could be a galvanizing moment for the introduction of a licensing and registration system for tattoo artists.

According to local reports, the rights body has decided to throw its weight behind legislative proposals currently pending at the National Assembly that seek to provide a legal way for aesthetic tattoo artists to work. Currently only those with a medical license are allowed to give tattoos, effectively outlawing most tattoo artists and tattoo parlors.

“(The bills) seek to ensure safe procedures and expertise (in tattoos) and reduce hygiene hazards, and thus its legislation would be valid,” Yonhap News Agency reported a draft recommendation for the legislature as saying.

The NHRCK has been reviewing a petition by local tattoo artist group Tattoo Union Korea, which claims that the current policy infringes upon their human rights.

Multiple bills have been proposed to allow legal status to non-medical tattoo artists. The latest case was by Rep. Ryu Ho-jeong of the opposition Justice Party in June of last year, in which she proposed to formally define tattooing as “inscribing various shapes on human skin with nontoxic pigment using needles,” regulate the practice via licensing of tattoo artists and mandating registration of their shops.

Granting legal status to tattoo artists has been a hotly-discussed topic in recent years, particularly amid the rising popularity of tattoos. Last month, liberal presidential candidate Lee Jae-myung mentioned legal licensing of tattoo artists as one of his campaign pledges.

To be correct, no law defines tattooing as a medical procedure. It was the Supreme Court that made the definition through a landmark ruling in 1992.

The top court then ruled that an eyebrow tattoo should be considered a medical procedure, on the grounds that a procedural error could inject ink into a deeper part of the skin and reuse of tattoo needles could potentially spread diseases.

This meant tattoo artists that do not have a license to practice medicine fall under article 27, clause 1 of the Medical Service Act, which states that non-medical personnel are prohibited from performing medical practices.

Kim Do-yun, the leader of Tattoo Union, was sentenced to a 5 million won fine ($4,175) in December 2021 for giving a tattoo to an unspecified celebrity two years earlier. He, like most members of the group, does not have a medical license.

“I started this (legal) fight to overturn (the 1992) Supreme Court ruling. I will fight calmly to the end,” he said in a press conference after the ruling, saying that he will appeal the case and file charges to the Constitutional Court.

Some tattoos are conducted by licensed physicians, such as eyebrow tattoos done mostly by dermatologists. But most tattoos are done without any supervision of the authorities, simply because tattoo licenses do not exist in Korea.

“There are cosmetic institutions that say they will give you a license upon completing a course, but that’s meaningless because it’s not a state-authorized permit,” said a tattoo artist working in Hongdae, western Seoul, who declined to be named.

Except for some rare cases, local law enforcement rarely cracks down on tattoo shops, allowing them to promote themselves via social media and websites. A quick Google search will get you contact information of the several tattoo artists in Seoul, most of whom are in Hongdae area.

There were times when tattoos were a social taboo in Korea, when a bulky man with dragons or tigers inscribed all over himself effectively equated bad news. There was even a regulation in the mandatory military draft for all Korean men that would assign men with tattoos covering most of their bodies to non-combatant posts, on the grounds that they were unfit for normal duties as a soldier due to the social perception of tattoos. The regulation was abolished in 2021.

But this is no longer the case, as seen by celebrities showing off their tattoos on TV and the presence of brightly-lit shops across the country.

There are even tattoo artists with YouTube channels, like “Danhaha,” a couple that runs a tattoo shop in Hongdae. The couple once uploaded a video of them tattooing each other, a clear indication that tattoo artists in Korea longer operate only in the dark.

In the same survey, 65 percent said they agreed with “legalizing” tattooists, meaning licensing them for operation, while 15.7 percent were against it, and the rest saying they are not sure. 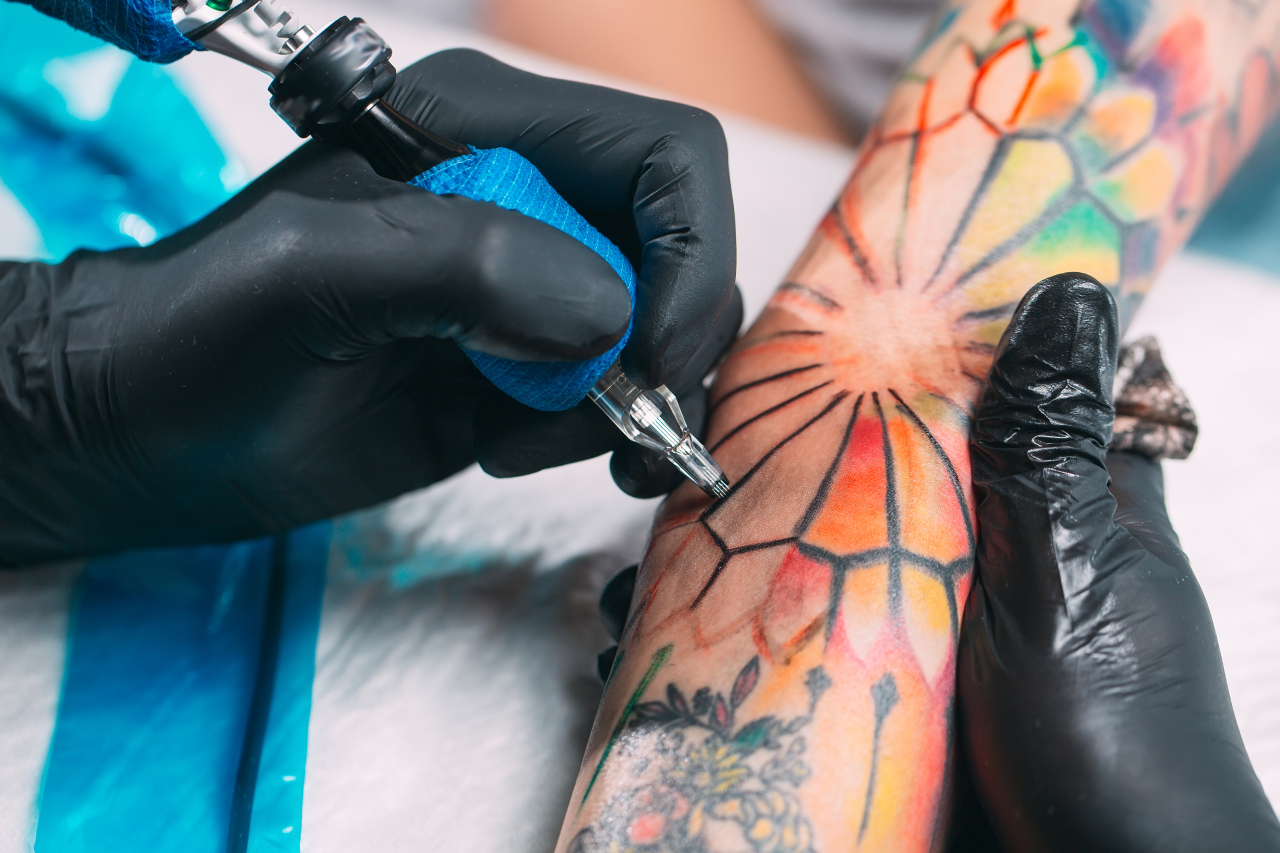 A person getting a tattoo. (123rf)
Tattoo and regulation

The aforementioned survey said 74.6 percent of respondents had some level of fear regarding infection from an unhygienic procedure, which is a legitimate concern.

“The Risk of Bacterial Infection After Tattooing” in 2016 by German researchers, performed a systematic review on cases between 1984 and 2015, and found reports of both local skin infections and systematic infections.

“Inappropriate hygiene measures in tattoo parlors and non-medical wound care are major risk factors for tattoo-related infections. In addition, facultative pathogenic bacterial species can be isolated from tattoo inks in use, which may pose a serious health risk,” the researchers concluded in the paper published in Deutsches Ärzteblatt International — the German Medical Association’s official international bilingual science journal.

Tattooing is definitely a procedure that entails a legitimate health concern, which is why countries outside of Korea have laws regulating it on various levels. European countries like Greece, Denmark, the UK and the Netherlands have laws related to the recipients, such as age and physical health requirements, as well as where on the body one can receive tattoos.

Every state in the US has legal limits on the recipients age, and each state has varying levels of license and registration process for tattoo artists. Alabama, for example, issues licenses for tattoo, body piercing and body arts facilities and sets standards for operation, while Texas requires all tattoo artists and body piercers to be registered with its health department. States like Maryland requires tattoo artists to comply with specific health code regulations.

Because of the legislative vacuum related to tattooing in Korea, there is no legal way to prohibit minors from getting tattoos. Literally anyone can get tattoos in Korea, but only graduates of medical schools can give them.

“We (tattoo artists) are aware of the hygiene issues related to tattoos, and the need to take proper caution. We would like to get a license, but there is just no way to,” the Hongdae-based tattoo artist said.

Plastic surgeon Cho Myung-shin is among the few tattooists in Korea who is an actual medical doctor. In his recently-published book “Tattooing Doctor,” he claimed that the public’s preference for status quo prohibits the tide of change.

“There is a wide-spread perception among the public that not much is wrong (with the current tattoo policies),” he wrote, adding that the decision is being made by those who are the most unfamiliar with tattoos.

According to an October report by the National Assembly Research Services, the number of people who practice tattooing is estimated to be around 50,000, with an additional 300,000 estimated to be in what was described as “semi-permanent make-up industry” such as eyebrow tattoos. “Tattoos have become popular, with the recent trend showing high acceptance from the public... It is time to reach a decision on whether tattoo practice should be fully legalized,” the report said.