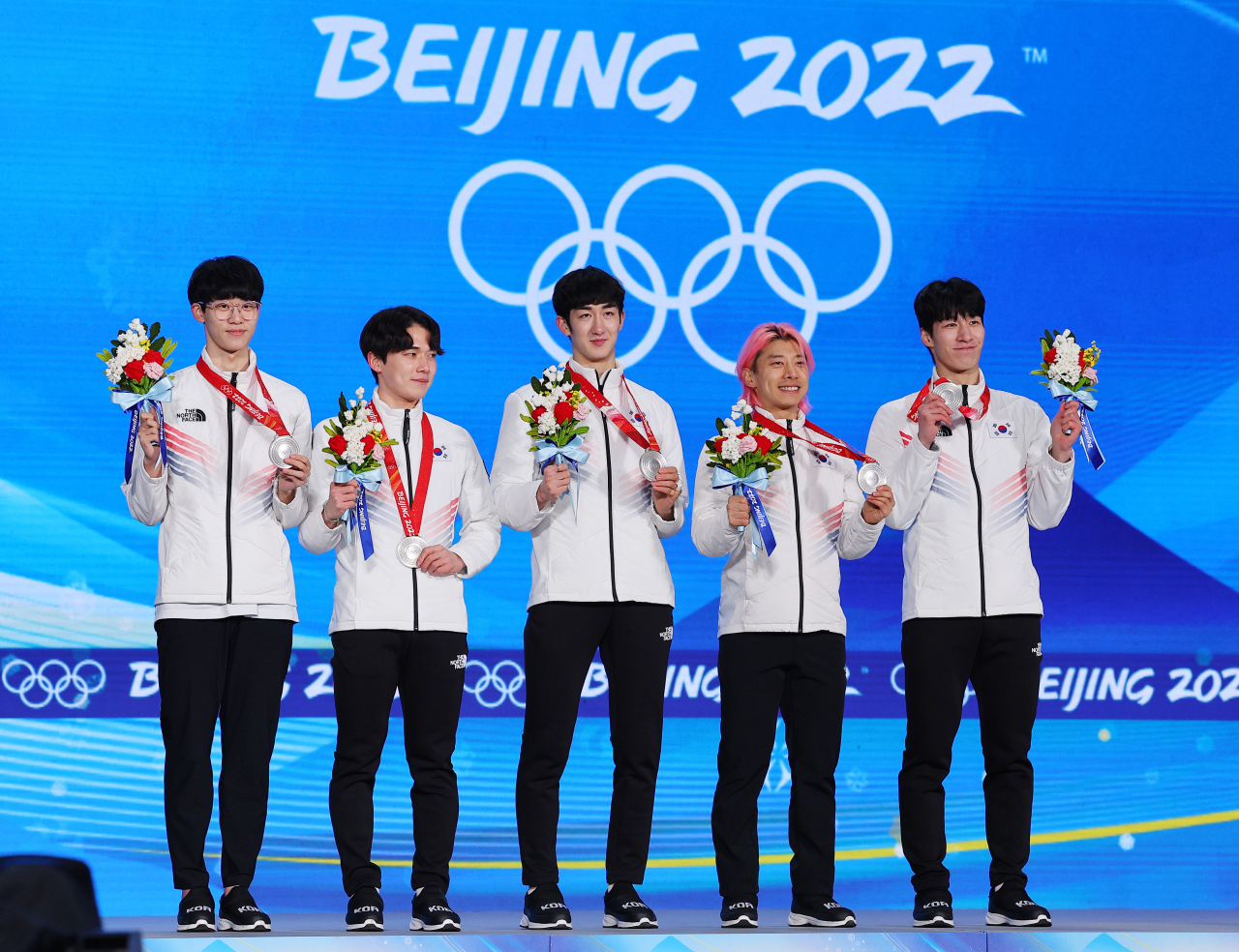 Members of the South Korean men’s short track speed skating relay team pose with their silver medals during the medal ceremony at the Beijing Winter Olympics at Beijing Medal Plaza on Thursday. (Yonhap)
Five Korean athletes, who won the silver medal in men’s 5,000-meter short track speed skating relay at the 2022 Beijing Winter Olympics, will appear on tvN’s talk show “You Quiz on the Block,” a CJ ENM official told The Korea Herald on Monday.

Speed skaters Kwak Yoon-gy, Hwang Dae-heon, Lee June-seo, Park Jang-hyuk and Kim Dong-wook are slated to record their episode Wednesday, while the program is working on an episode featuring athletes who competed in Beijing 2022, the official said.

The exact date of the show’s broadcast has yet to be decided. While show episodes are typically recorded one or two weeks ahead of their airing, the episode featuring the men’s short track relay team may be broadcast later than usual, the official said.

On Saturday, another industry official told The Korea Herald that the speed skaters confirmed their appearance on the program and that the recording could take place before the upcoming National Winter Games, which are scheduled to kick off Friday.

In the meantime, the five silver medalists are also set to appear on MBC’s talk show “Radio Star” as well.

The quartet of Hwang, Kwak, Park and Lee finished in second place behind Canada in the 45-lap race at Capital Indoor Stadium on Thursday. While Canada finished in 6:41.257, South Korea ended in 6:41.679 and Italy won the bronze in 6:43.431.

Kim, who skated in the semifinals but sat out the final, also received his silver medal.

The team’s silver medal last week marked the first men’s relay medal in 12 years for the country since a silver at the 2010 Vancouver Olympics.

Kwak performed a hook step of K-pop boy band BTS’ hit song “Dynamite” before stepping on the podium at the Capital Indoor Stadium on the same day. It was his effort to show appreciation RM’s support during the Olympic Games. His performance soon went viral on social media.

Meanwhile, Cha Jun-hwan, who finished fifth in the men’s singles figure skating competition in Beijing, is also set to be a guest on “You Quiz on the Block.”

On Friday, the program uploaded still cuts of the figure skater’s episode featuring its hosts Yoo Jae-suk and Jo Se-ho on its official Instagram account.