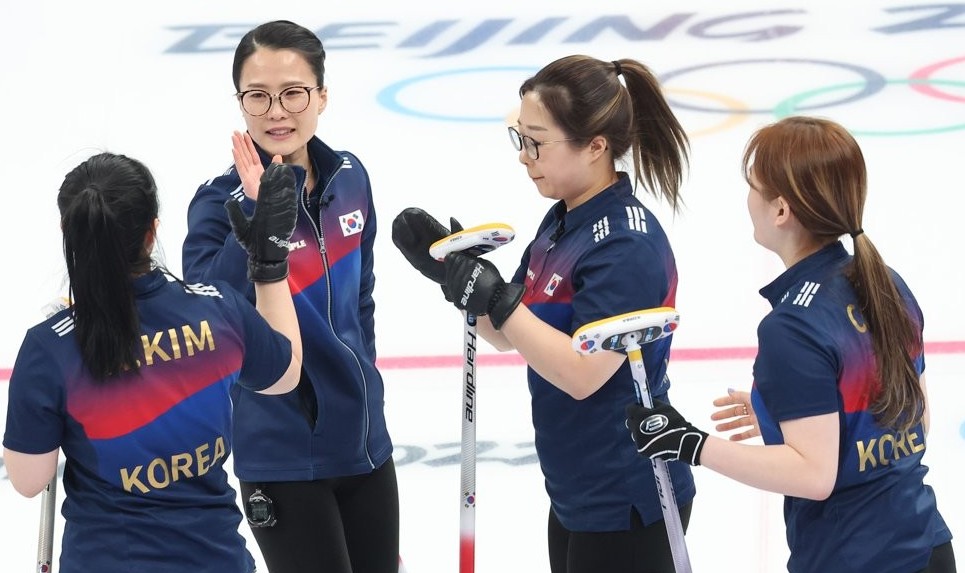 South Korean curlers Kim Kyeong-ae, Kim Eun-jung, Kim Seon-yeong and Kim Cho-hi (L to R) celebrate a point against Sweden during a women's curling round-robin game at the Beijing Winter Olympics at the National Aquatics Centre in Beijing on Feb. 17, 2022 (Yonhap)
South Korea was knocked out of the women's curling tournament at Beijing 2022 on Thursday following an 8-4 loss to Sweden in the final round-robin match.

South Korea, which won a surprise silver medal in 2018, finished in eighth place in the 10-team round robin session, with only the top four advancing to the semifinals.

At 4-5, South Korea, lead by skip Kim Eun-jung, had an identical record with the United States and China but ranked behind both countries, because it had lost to both teams earlier in the tournament.

South Korea opened the competition with a 12-7 loss to Canada.

Falling to Switzerland Wednesday morning dealt a big blow to South Korea's hope of reaching the final four, but Team Kim bounced back with a dramatic, 8-7 win over Denmark Wednesday night.

It set the stage for the do-or-die game against Sweden Thursday. South Korea had to win and get help from others to reach the semifinals.

South Korea's game was the last one to finish, and Team Kim did indeed get plenty of help. Switzerland, Britain and Canada had all won their respective games, and for South Korea, it came down to beating Sweden or going home emptyhanded.

After a blank first end, South Korea stole two points in the second end. Kim rolled a perfect draw with her final rock to give her team two stones near the button, or the center of the house.

Her counterpart, Anna Hasselborg, tried to play a draw around South Korean guards and into the button. But her final shot slid out farther away from the center than either South Korean stone, allowing Team Kim to go up 2-0.

Hasselborg executed a better draw in the third end to cut the deficit to 2-1. South Korea regained a two-point lead in the fourth end, and Sweden responded with a point in the next end.

The teams traded a point each in the sixth and the seventh ends, with South Korea up 4-3. But then in the eighth end that featured missed shots from both ends, Sweden emerged with two points to take a 5-4 lead with two ends left.

The momentum shifted in Sweden's favor. With four Swedish stones in the house and very little room to maneuver, Kim held the last stone of the ninth end and couldn't prevent Sweden from stealing a point for a 6-4 lead.

Kim played the very last shot of the match, with an outside chance of grabbing two points to force an extra end. But Sweden ended up getting the final two points to close out the victory and send South Korea home.

"We were in control through five ends, but there were a few shots that I wasn't happy with," Kim said afterward, choking back on tears. "If I had focused on my shots, rather than the results, I wouldn't have put the team in this situation. I should've been able to keep the game closer. I'll try to get better in that aspect."

Head coach Lim Myung-sup said, as disappointed as he was to miss out on the semifinals, he was still proud of his curlers.

"We've worked so hard for this and really earned our way to the Olympics," Lim said. "We'll have to live with this result and try to take lessons from here to get better." (Yonhap)