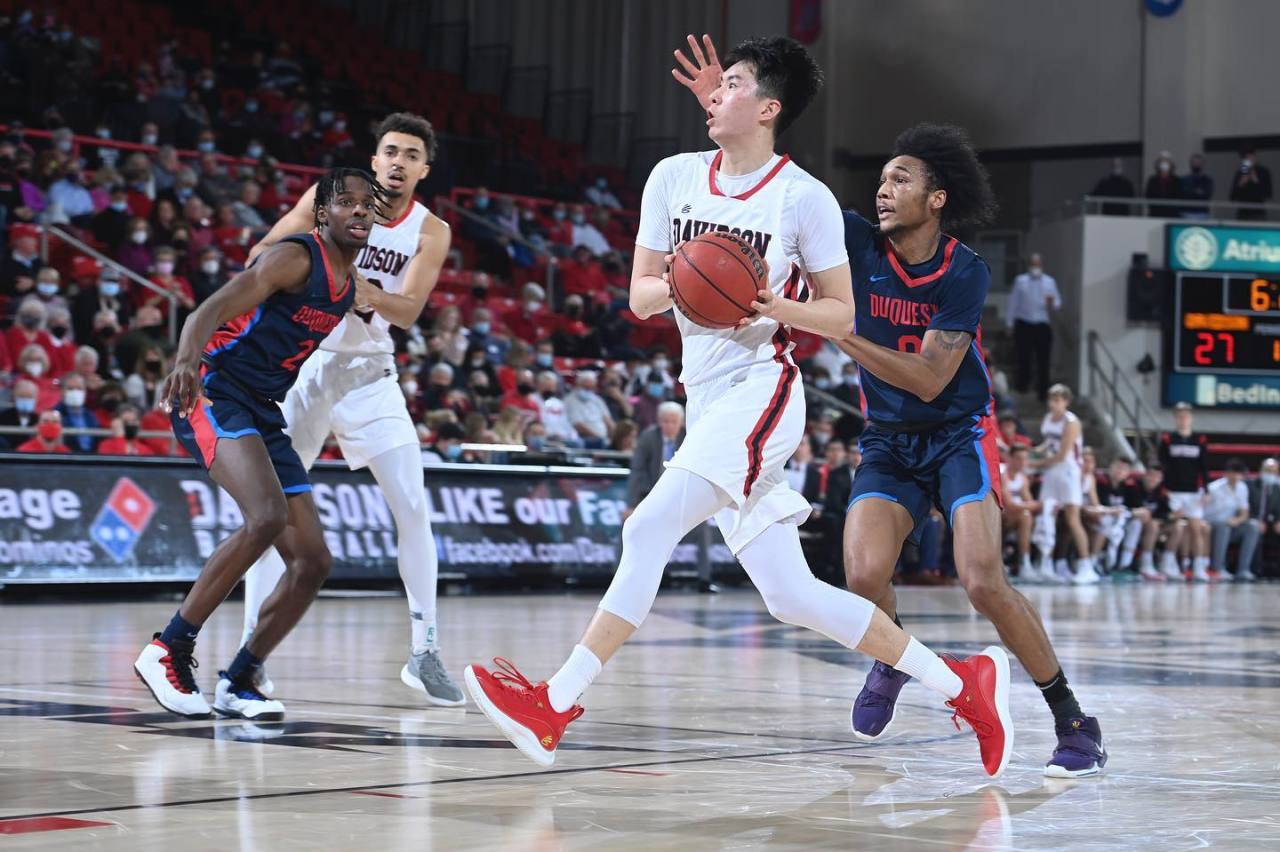 Davidson College’s Lee Hyun-jung (holding the basketball) drives to the basket during a NCAA Division 1 game against Duquesne in Pittsburgh, Pennsylvania, Monday. (Photo from www.davidsonwildcats.com)
In 2014, The Korea Herald asked, “Will Korea ever have ‘Linsanity’?” in an article highlighting the inherent limitations of Korea‘s student athlete system, which enforces all sport and no study. Eight years later, Lee Hyung-jung of NCAA’s Davidson College may have given us the answer.

Lee is one of the key contributors to the Davidson Wildcats‘ conference-leading 21-4 record and, equally importantly, is among a new breed of Korean athletes who meet both the academic and athletic requirements.

Before the Davidson junior scored 20 points to help the team’s sweet victory against Duquesne on this past Valentine’s Day, he had scored 1,030 on the US Scholastic Aptitude Test back in 2019. The NCAA’s academic qualifier for Division 1 athletes is a 2.3 GPA and 980 on the SAT for a combined score, or a sum score of 75 ACT. This operates on a sliding scale that allows for lower SAT/AC scores for students with higher GPAs and vice versa.

Why is this relevant? Just ask Ha Seung-jin, the only Korean who has ever played in the NBA.

“I was scouted by several (NCAA) colleges when I went to the US, including (the University of) Kentucky. As you know, I did not study at all back then,” Ha said, explaining why he did not choose an NCAA path in 2004 during his recent YouTube video analyzing the NBA prospects for Lee. The University of Kentucky has one of the most successful basketball programs in the US, with eight national championships and NBA-leading 27 active players.

Contrary to Korean students’ reputation as hard workers, student athletes hardly studied due to academic requirements for them being practically nonexistent until recently.

In 1994, the Education Ministry introduced a rule that required athletes to meet a minimum score of 40 out of a possible 200 on the Suneung (Korea’s national college entrance exam) to enter college. Even so, baseball superstars like Lee Seung-yuop made headlines for failing to qualify, which he later claimed was on purpose to avoid college.

Under a revision made in 2010, the minimum academic requirement for elementary school athletes is half the score of overall test scores -- 40 percent for middle schools, and 30 percent for high schools. Even so, 30 percent out of 36,106 student athletes in 2016 failed to make the cut.

“The biggest problem (with the current system) is that in an environment where student athletes can advance to higher education institutions based solely on athletic accomplishments, they are led to neglect their rights as students and choose lives as athletes,” Lee Yang-gu and Hong Hee-jung of Seowon University’s physical education department wrote in a 2017 study of the student athlete system.

“Student athletes who grow up in such an environment are in danger of losing the opportunity to foster their learning abilities, which can lead to them lacking basic cultural and academic skills required to live a normal life within society.”

A drastic overhaul of the system came unexpectedly as a result of a political scandal that led to the ousting of President Park Geun-hye in 2016. Park’s secret confidante at the center of the corruption and power abuse scandal, Choi Soon-sil, was accused of pulling strings to help her daughter enter college as a student athlete. The ensuing nationwide furor pushed the Education Ministry to come up with response measures.

The ministry in 2017 revised the student athlete system to ensure high school grades are factored into the college admission process. In another move, the ministry has progressively reduced the days of absences allowed for sports since 2017, ultimately allowing five days for elementary, 12 for middle, and 25 days for high school students in a year. This does not apply to the national team schedule, for both practices and competitions.

It is unclear how much the new system affected Lee, who was attending Sam-il High school at the time of the revision, before joining the 2018 incoming class of NBA Global Academy. But his mother Sung Jung-a, silver medalist in basketball at the 1984 Olympics, said studying has always been a priority in her son’s upbringing.

In an interview with local magazine Jumpball, Sung said she chose her son’s elementary school based on knowledge that it does not overwork student athletes. “Overworking (student athletes) from a young age would burden their bodies and possibly their growth. I always made sure (Lee) studied. Not just enough for a student athlete, but just as much as other regular students do,” she was quoted as saying.

Books have thwarted the dreams of another Korean basketball player a decade ago.

In 2010, then-Maryland University player Choi Jin-soo said he would forego his NCAA career to enter the Korean Basketball League draft. He received an academic redshirt in the year prior, banning him from playing in official competitions. This was widely believed to have played a big role in capsizing the NBA dreams of the first Korean ever to play in the NCAA Division 1.

Grades are not slowing down Lee, as he has played all three seasons without a hitch. However, he does need to pick up his game in order to make an impression on NBA scouts. His shooting, which last year made him the first Davidson player to record over 50 percent, 40 percent and 90 percent in field goal, three-point and free-throw percentages, respectively, has slightly dropped compared to the beginning of the season.

Despite the high hopes of his compatriots, Lee’s chance of being the first Korean to be drafted in the first round for the NBA is still fairly small. In both this season and last, there was distinct buzz around his name appearing as a first round prospect in earlier NBA draft predictions. These speculations were dropped or disappeared as the season went on, usually around mock draft versions 3.0 or 4.0.

The Athletic’s NBA draft expert Sam Vecenie predicts that Lee will be drafted 47th in The Athletic’s 4.0 mock draft in January. This is the more realistic prediction as of now.

A famous Davidson alumni is Stephen Curry, the only Wildcat to be drafted in last 50 NBA drafts. Curry averaged 25.3 points, 53 percent in field goal percentage and 41.2 percent in three-point percentage for his entire three-year college career. Those are the kind of numbers that got him drafted seventh overall out of Davidson, on top of him leading the Wildcats’ improbable run to the Elite Eight in 2008.

But Lee still has a chance to make an impression on NBA scouts. As of Wednesday, Davidson is leading the Atlantic 10 conference with its 21-4 record, 3.5 games ahead of Dayton.

This gives the Wildcats a good shot at earning their first slot at the NCAA tournaments since 2018, and even to acquire automatic bids as A10 conference champions. Last year, the third-seed Wildcats were knocked out of the semifinals of the A10 tournament.

If Lee’s grades propelled him to be an elite NCAA player, his admirable performance in his first “March Madness” appearance is likely to boost his chances of becoming an NBA player.