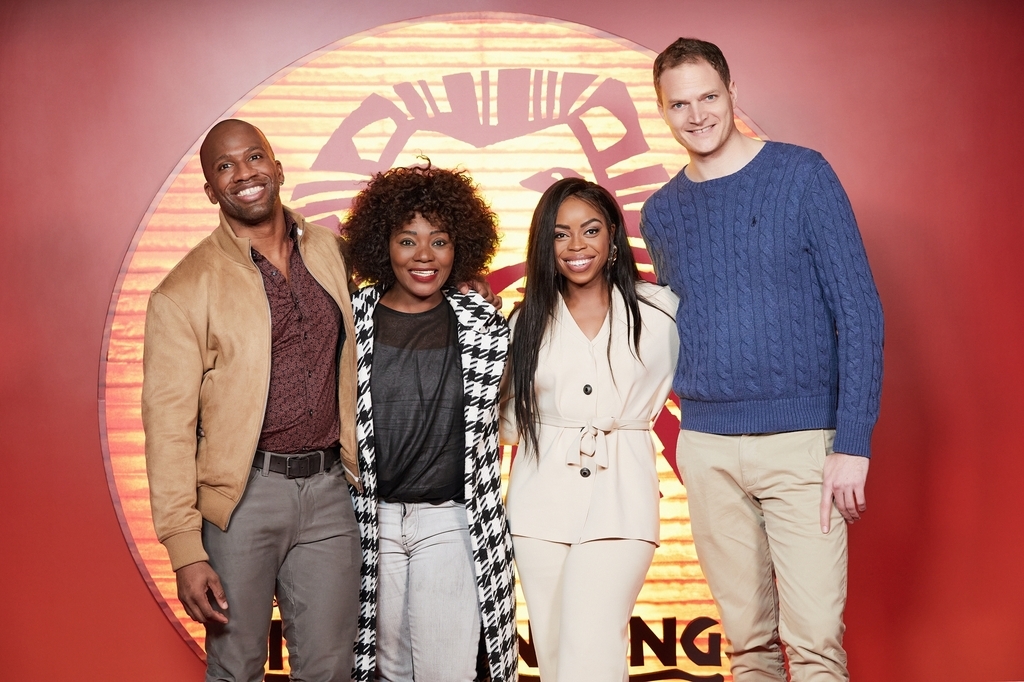 Actors of the Lion King -- (from left) Dashaun Young (Simba), Futhi Mhlongo (Rafiki), Amanda Kunene (Nala) and Anthony Lawrence (Scar) -- pose for a photo during an online press conference on Wednesday. (S&CO)
In the dark reality of the pandemic, a long-running classic has brought a sense of hopeful nostalgia to the stage.

“The Lion King” is back in Seoul after nearly 3 years, and has once again shown why it captures so many hearts.

As the curtains go up, the audience is immediately enraptured by the march of animals as Futhi Mhlong, who has been playing mandrill Rafiki for the past 14 years, sings “Circle of Life.”

Even though the iconic entry of the animals through the aisles has been removed from the production this time, due to concerns over COVID-19, this is the moment when even those familiar with the beloved story from watching the 1994 animated film during childhood discover a fresh look of the story.

Giving this freshness is the “double event” approach, which shows the audience both the puppets and their puppeteers, allowing the puppeteers to visually express their emotions.

“Julie Taymor created something which works in perfect harmony, a ‘double event’ where not only you are watching animals on the stage, you’re watching humans to help drive this human story through,” Anthony Lawrence, who plays the villain Scar, told reporters during a press conference in Seoul last week. “For me, I have moments where I am Scar the human, and I also have my moments why I’m Scar, the lion,” he added.

Getting used to the “double event” took a lot of practice for the actor. This included watching videos of the animals at the beginning of each rehearsal to assimilate their moves, as well as learning traditional Southeast Asian dances. The production drew on these exotic dances to bring lions to life in a unique way, according to Lawrence and other actors.

“I spent a lot of hours training in front of a mirror to see exactly what I look like, and what the puppet looks like on top of my head,” Lawrence said.

More importantly, actors had to learn how to incorporate themselves into their animal characters.

“I try my best to focus on not only the (Southeast Asian dance) techniques, but also incorporating my human qualities into not only my body, but also linking it ... to the physicality of the mask that’s attached to my head,” Amanda Kunene, who plays lioness Nala, told reporters.

In addition to its theatrical mastery, the story itself has the power to send each audience member on an emotional journey.

“No matter what you‘re going through, no matter what you’re feeling, when you come into the theater and the lights go down, you’re going to go on an emotional journey and have an experience that is like no other thing that you’ll experience,” Dashaun Young, who has been playing Simba for years, said. He added that South Korean audiences do not shy away from expressing their emotional journeys through social networking services.

“I’ve gotten so many messages from people just trying to say how they felt about the show. And that’s been a beautiful thing to see and respond to, and (be able to) talk to all you guys,” Young said.