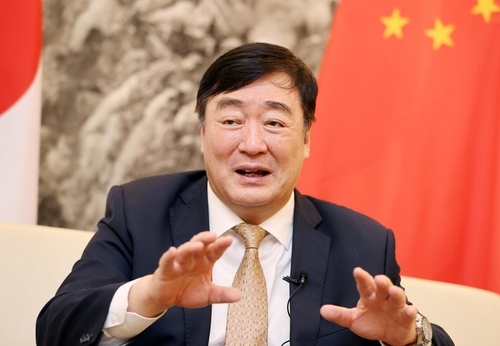 Ambassador Xing Haiming delivered the message through his spokesperson at the Chinese Embassy.

"With regard to the athlete Hwang Dae-heon's performance, Chinese people are also positively evaluating it in show of the true friendship of the two countries' people," the embassy official said in a press statement.

The official also expressed hope for the further development of friendly, cooperative ties between the two sides in various fields on the occasion of the Beijing Olympics and the 30th anniversary of forging bilateral diplomatic relations.

The embassy's latest public message represented an about-face from its expression Wednesday of "grave concern" over the accusations of favorable judging for the Chinese team in a short track speed skating competition.

In a statement posted on its social messaging account, the embassy took issue with criticism by "some South Korean media outlets and politicians" on the disqualification of Hwang and another South Korean skater, Lee June-seo, in the semifinals of the men's 1,000-meter race Monday night, which led Chinese competitors to reach the finals.