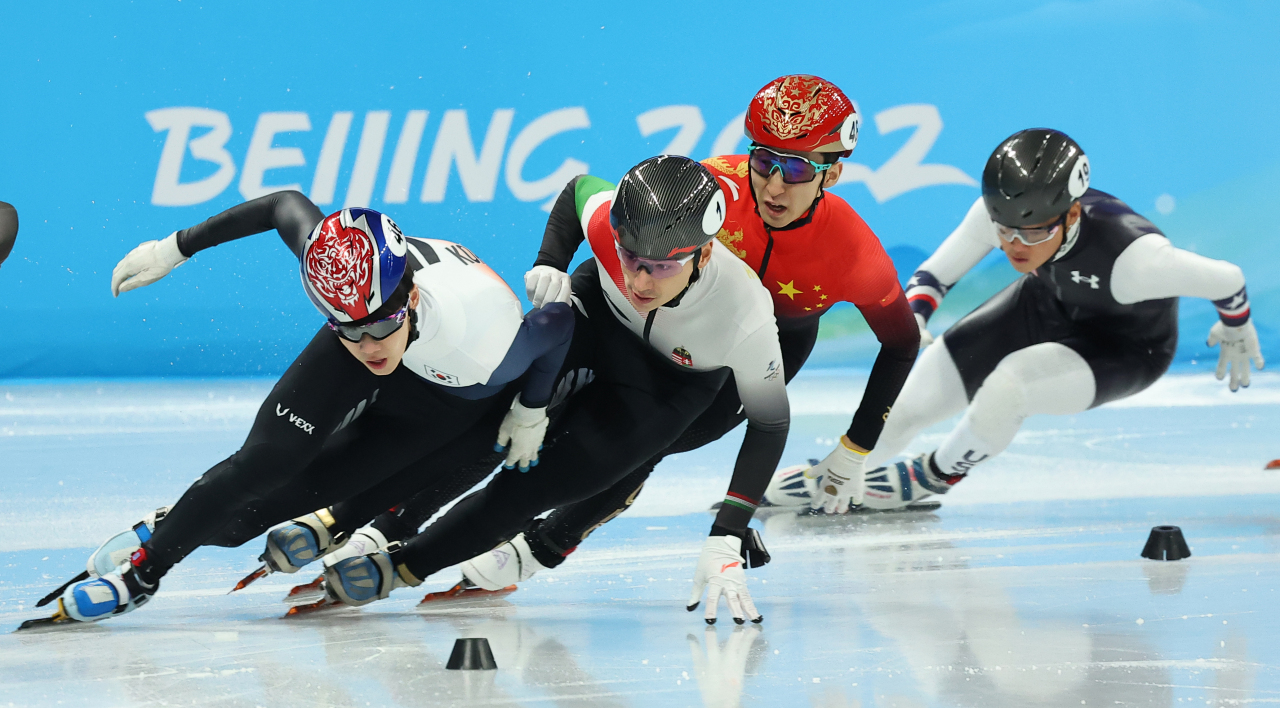 Lee June-seo of South Korea (L) clashes with Liu Shaoang of Hungary during the semifinals of the men's 1,000m short track speed skating race at the Beijing Winter Olympics at Capital Indoor Stadium in Beijing on Monday. Lee finished the race in second place but was penalized for making a lane change that interfered with Liu. (Yonhap)
Many South Koreans expressed outrage on Tuesday over what they perceived as egregious refereeing against some of the country's short track speed skaters at the Beijing Winter Olympics this week.

In the men's 1,000m semifinals on Monday, South Korea's Hwang Dae-heon and Lee June-seo each got disqualified from their respective heats for illegal passing and lane change. Those decisions each allowed Chinese skaters to advance to the final, and the host country ended up collecting gold and silver medals.

South Korea lodged a protest with the International Skating Union (ISU), the international skating governing body, on Tuesday regarding Hwang's penalty but was rejected, with the ISU arguing that decisions regarding disqualification for rule violations cannot be challenged.

Since Monday evening, many South Koreans on social media cried foul against what they claimed was biased refereeing in favor of the Olympics host nation. The sentiment was especially strong after China showed the traditional Korean attire hanbok during Friday's opening ceremony amid speculation China is trying to promote hanbok as its own.

"Considering the quality of the refereeing, the true winners of the Olympics are those who aren't competing here," one South Korean user reacted on Twitter.

Another person quipped by saying that "a neighborhood athletic event would probably be more fair and well-mannered" than the 2022 Beijing Games.

Others also took aim at the host nation, raising conspiracy theories that the International Olympic Committee (IOC) has probably rigged the Games in favor of China.

"Is China going to take up all the gold medals?" one person wrote while questioning whether the IOC has taken a large sum of bribes from Beijing.

Meanwhile, Victor An, the naturalized Russian ex-short tracker who was born Ahn Hyun-soo in South Korea and is currently serving as a technical coach for Team China, said he felt "sorry" for the officiating controversy "as a fellow skater and a coach" and asked people to refrain from attacking his family online "for something that was outside of the realm of his control." (Yonhap)