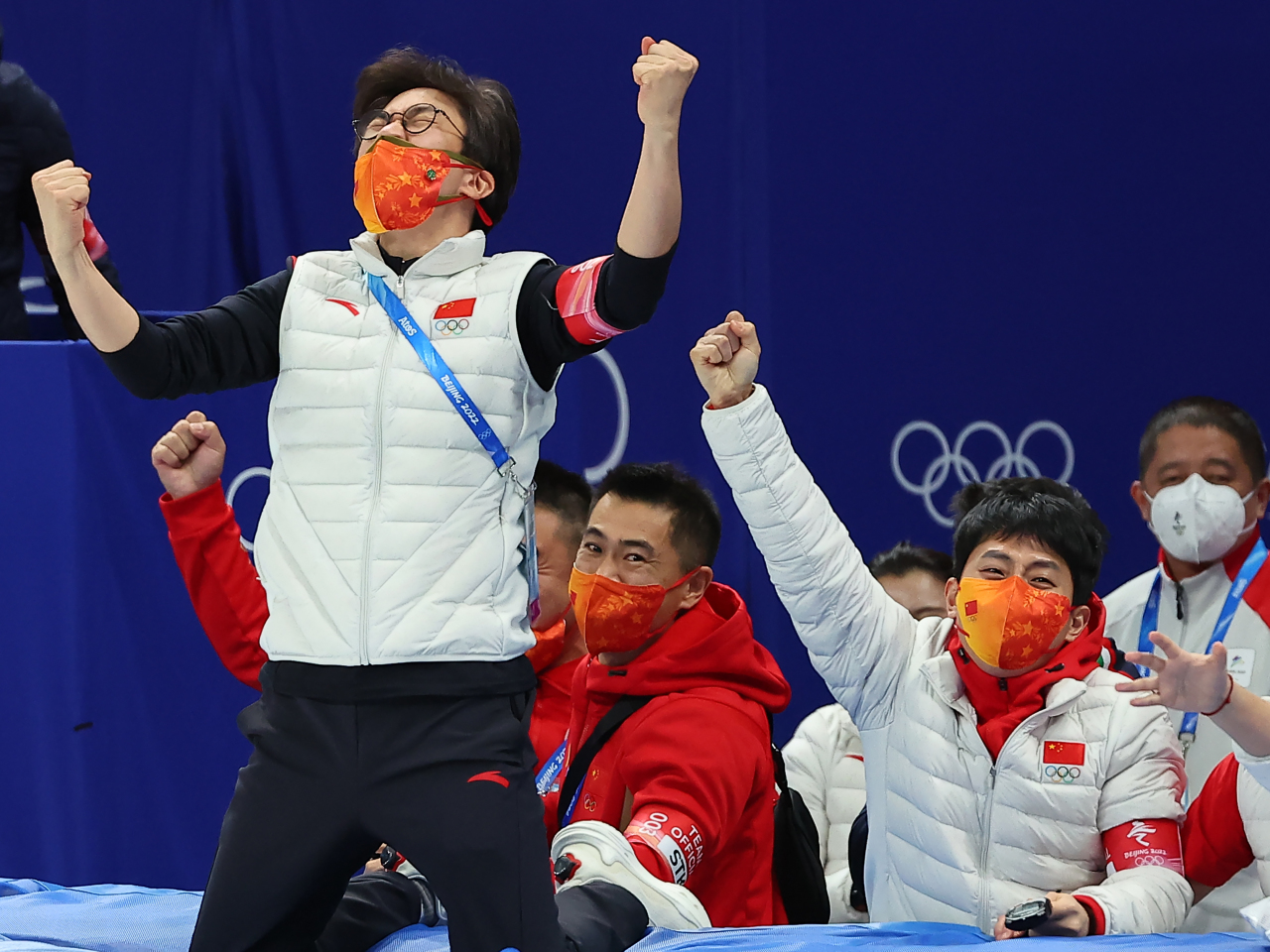 Kim Sun-tae (L) and Victor An (R), the South Korean-born head coach and technical coach of the Chinese national short track speed skating team, celebrate China's gold medal in the mixed team relay at the Beijing Winter Olympics at Capital Indoor Stadium in Beijing on Saturday. (Yonhap)
So what do you do when you can't beat them or join them?

You bring in someone from them.

That's what China did in short track speed skating before hosting the 2022 Winter Olympics in Beijing. Kim Sun-tae, who coached South Korea to six medals, including three gold medals, at the 2018 Winter Games, is now the head coach for China.

Together, they helped China grab the very first short track gold medal of Beijing 2022 on Saturday.

It came in a brand new event, the mixed team relay. China edged out Italy for the inaugural gold in the final, after advancing out of the semifinals thanks to penalties called against both Canada and the Russian Olympic Committee.

Meanwhile, South Korea couldn't even get out of the quarterfinals, the first phase for the mixed relay. Park Jang-hyuk, one of the team's two male skaters, lost his balance and fell without contact with three laps left in the 18-lap race, as South Korea finished third out of four teams in its quarterfinal heat.

The top two teams from each race, and the two-fastest third-place teams moved on to the semifinals. South Korea was third among No. 3 teams in the quarters.

For South Korean short trackers and their fans, watching Kim and An celebrate their gold medal while decked out in Team China gear must have been bittersweet.

South Korea has already witnessed a large exodus of its coaching expertise to other countries in archery, the Summer Olympics equivalent of short track where South Korea has been dominant for decades. It is not unusual to see South Korea go up against countries coached by Korean natives in late stages of Olympics and other tournaments.

China is a viable short track power in its own right, but still trails South Korea in the Olympic gold medal count by a fairly wide margin, 24-11. But with Saturday's victory, it sent the message, loud and clear, that it is determined to keep narrowing the gap.

Kim, An, and the rest of the Chinese team had been under strict orders not to give interviews in the leadup to the competition. The team even skipped a few official training sessions to keep things under wraps.

Following the relay victory, Kim finally opened up with the South Korean media in Beijing.

"It feels great to do so well in the very first event, but the Olympic Games aren't over yet," Kim said. "I am not going to take my foot off the pedal until the very end,"

Kim said he chose not to speak to the press before the Olympics because he feared he would have distracted both China and South Korea.

Asked if he wanted to face South Korea in the final, Kim said, "I know both teams have worked really hard for the Olympics. We just wanted to do our best."

Kim recalled how difficult it had been to take over South Korea following the team's subpar performance at Sochi 2014. He was tasked with putting South Korea back on track in time for its first Winter Olympics at home in 2018.

And for the second straight Olympics, Kim is coaching the host country's short track team.

"Those four years with the South Korean team were really hard, and the preparation for Beijing has been similar," Kim said. "There are expectations (from China) and I have to produce results. But it comes with the territory of being a coach." (Yonhap)