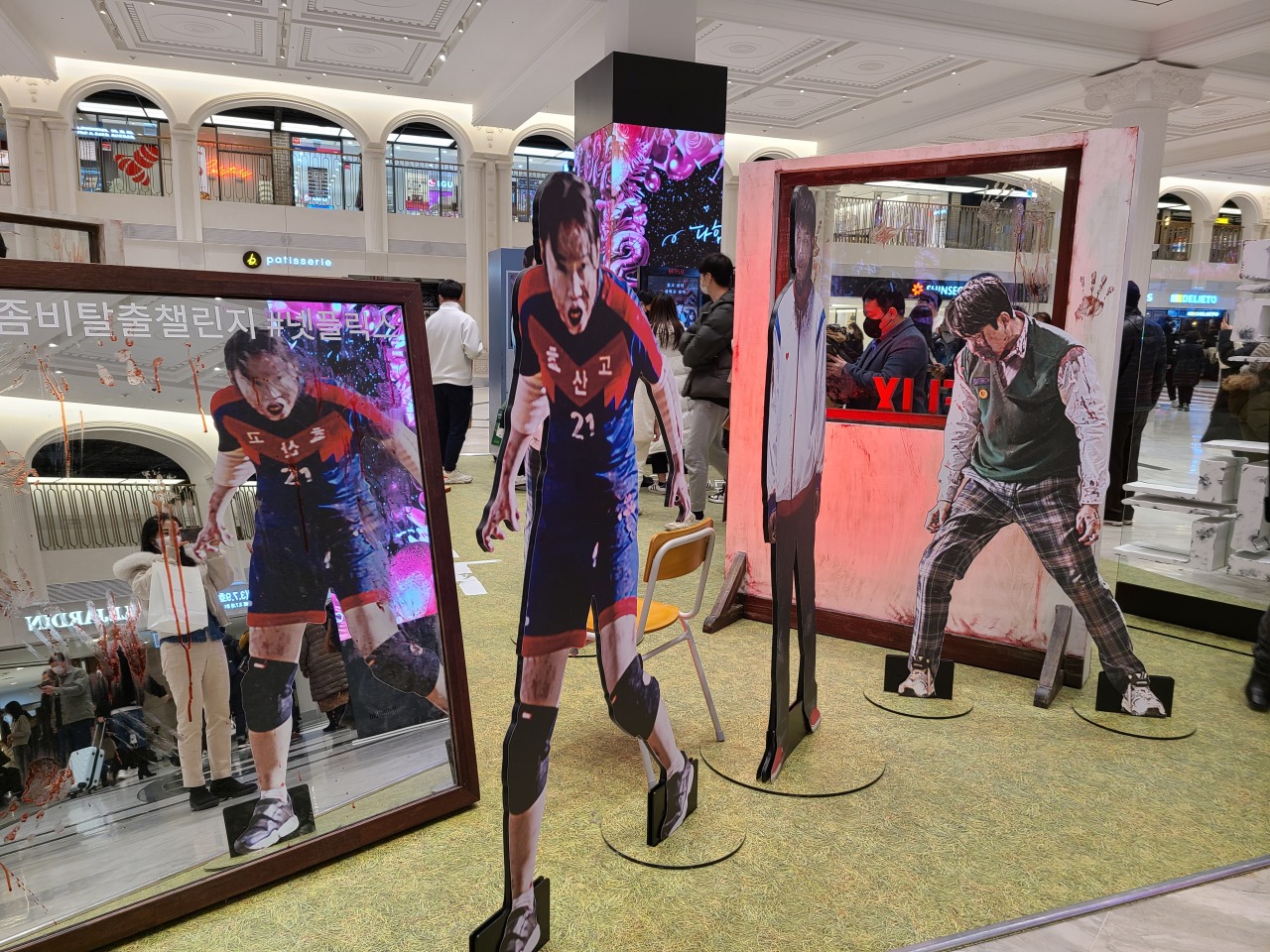 The pop-up zone, which runs until Sunday, is inspired by the 12-part series that was released on Jan. 28. The zone is open from noon to 9 p.m. 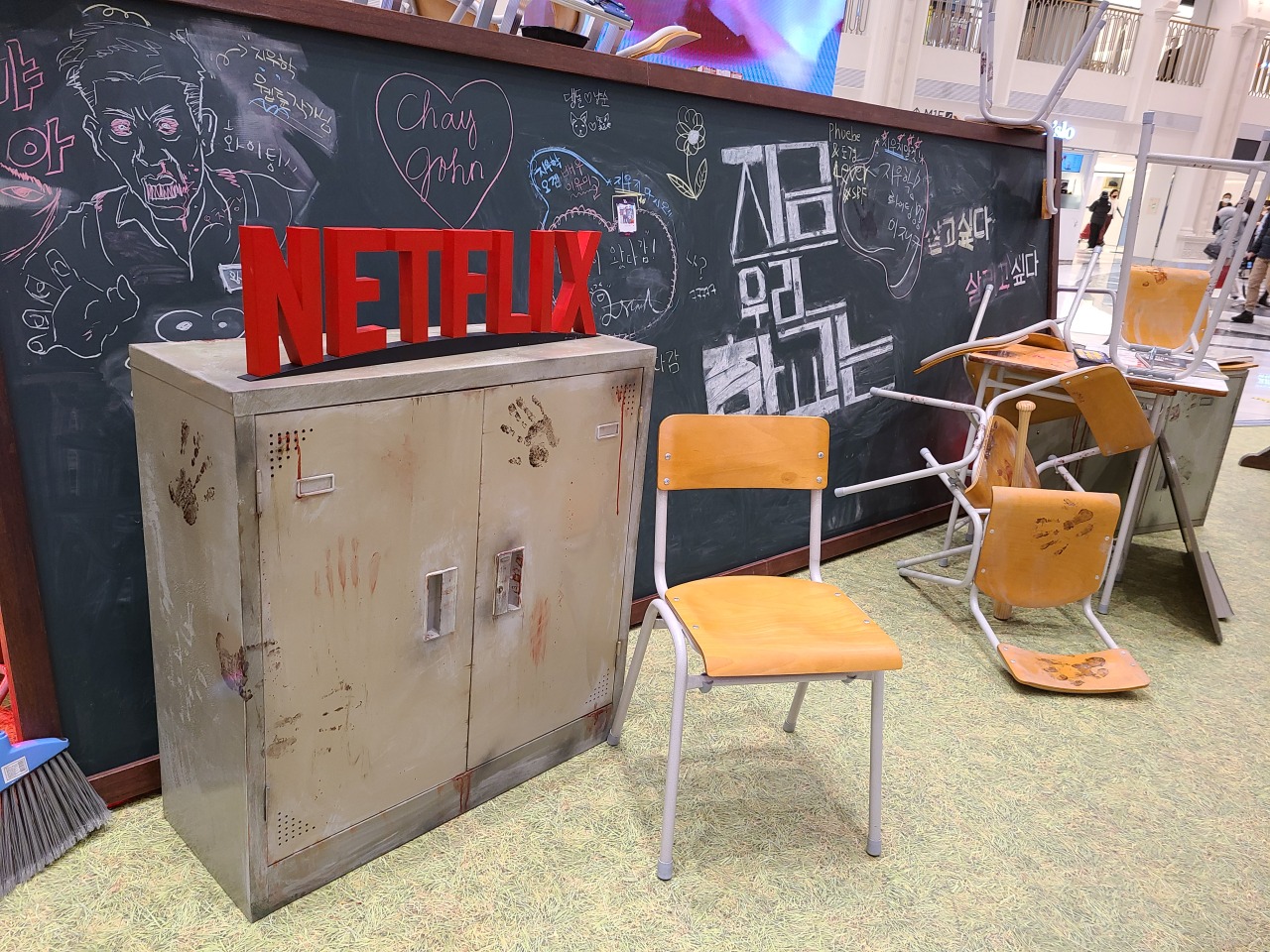 “All of Us Are Dead” pop-up zone in Shinsegae Department Store Gangnam on Wednesday (Song Seung-hyun/The Korea Herald)
Since most of the Netflix show is filmed in a high school, the zone has many photo spots that feature a school theme. One of the most popular spots has a typical desk and chair seen in Korean high schools and is similar to the ones used in the show. 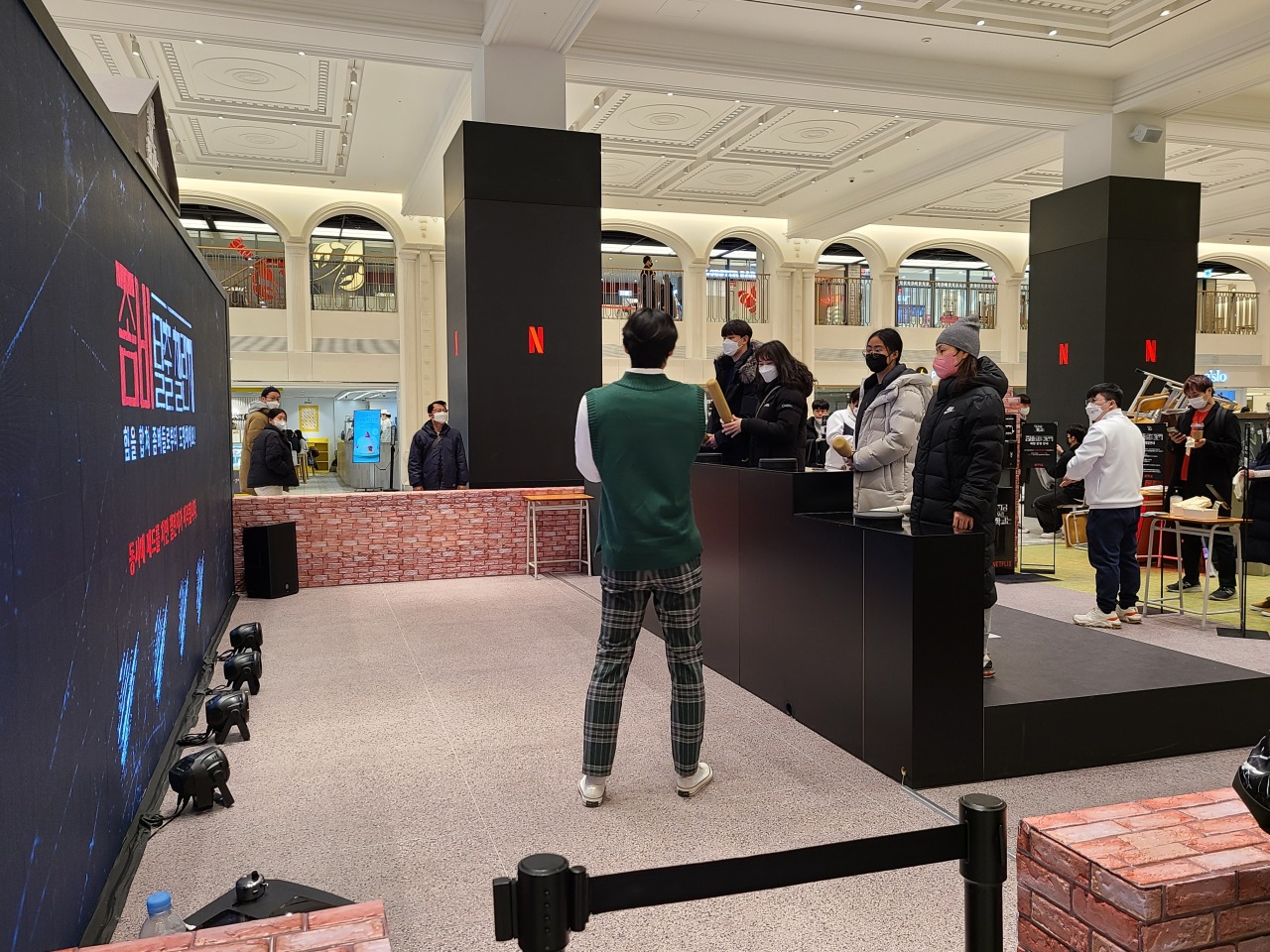 “All of Us Are Dead” pop-up zone in Shinsegae Department Store Gangnam on Wednesday (Song Seung-hyun/The Korea Herald)
Cardboard cutouts of student zombies are also installed here and there for photos.

Several chalkboards are put up for visitors to write down names or short messages. Actor Lee Yoo-mi, who played Na-yeon in the show, took photos at the spot and posted them on her Instagram on Jan. 28. 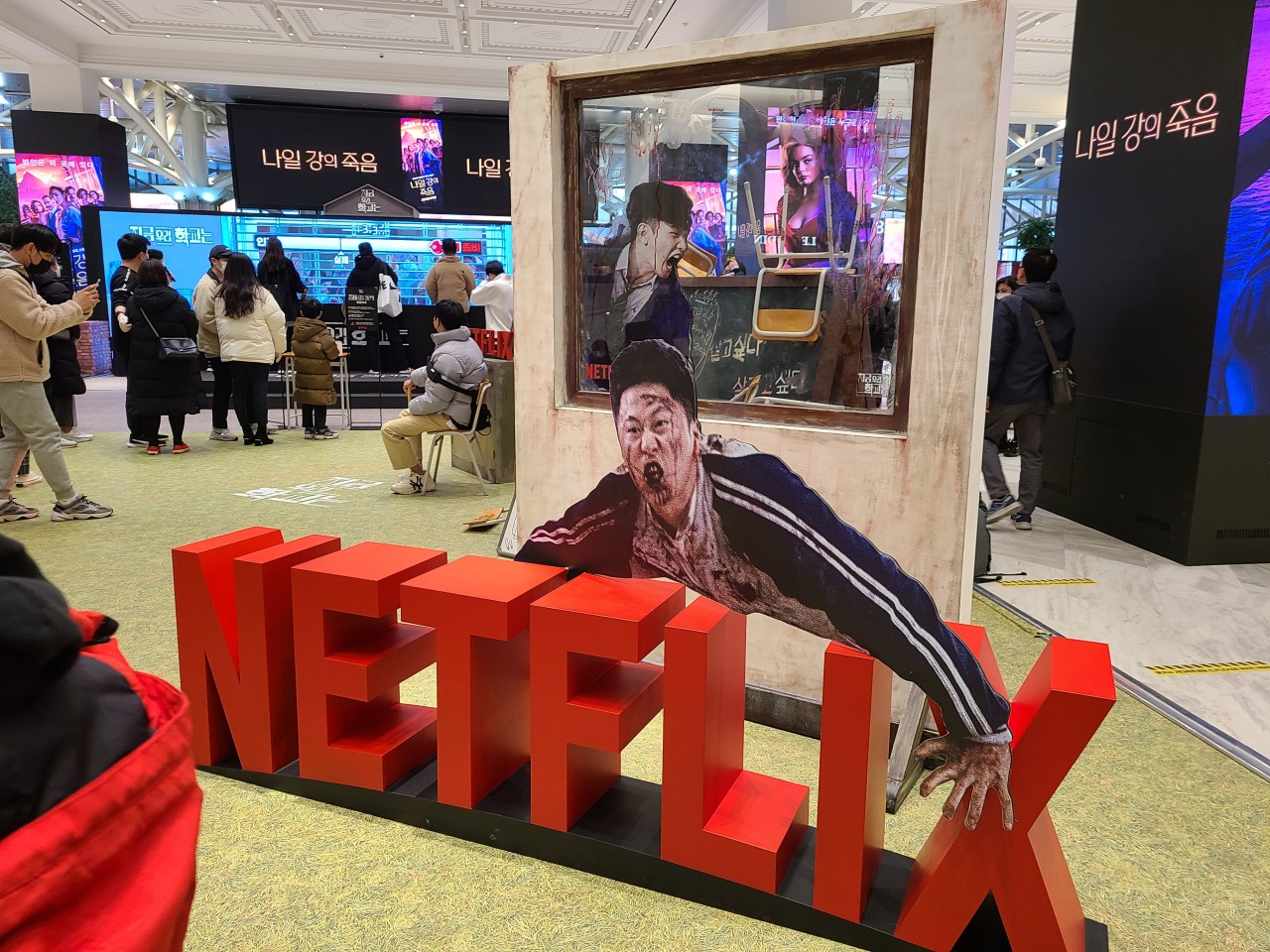 “All of Us Are Dead” pop-up zone in Shinsegae Department Store Gangnam on Wednesday (Song Seung-hyun/The Korea Herald)
There is also a section where you can play games that have been created based on the show. In one of the most popular games, zombies appear on a giant screen and players have to hit a pad in front of the screen with a bat to kill the zombie. 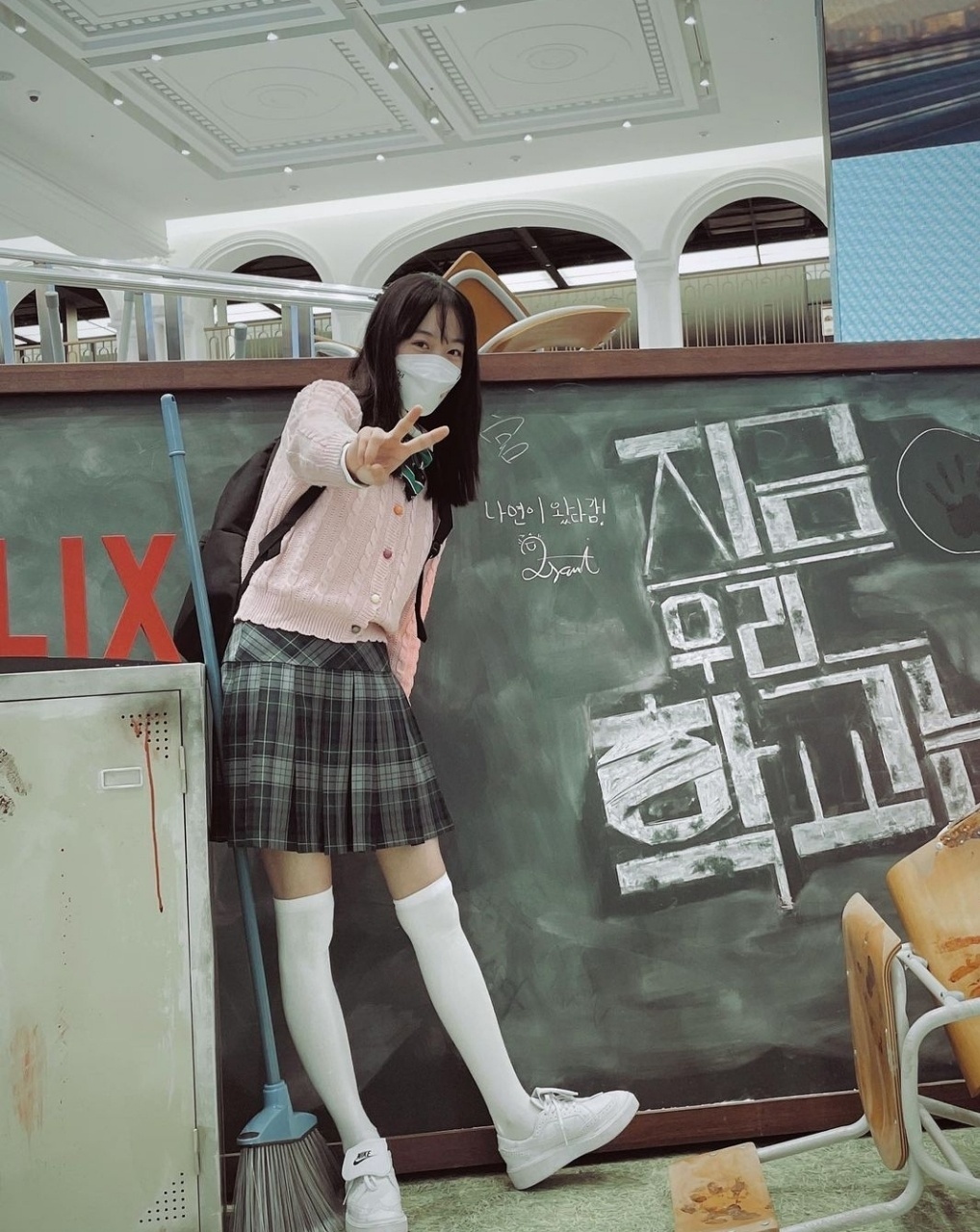 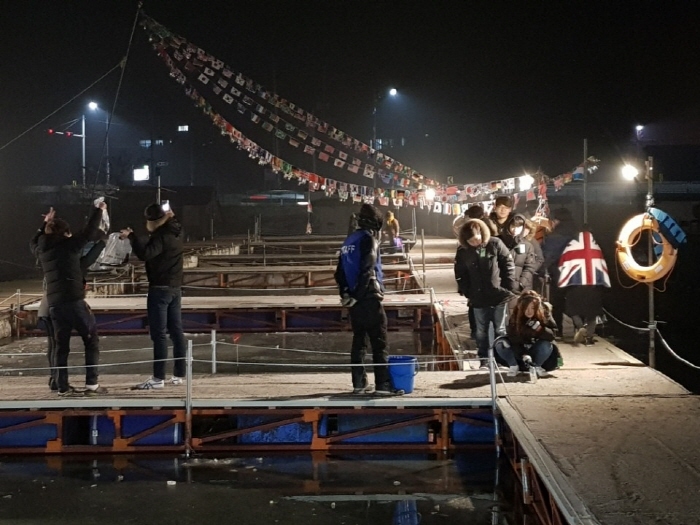 Visitors catch fish at night. (Ganghwa Ice Fishing Festival)
This Friday marks the start of spring according to the 24 seasonal divisions, which means that this weekend is the last chance to enjoy winter events such as ice fishing and sledding.

Paju Trout Festival offers ice fishing and traditional sledding. The event, which takes place at Gwangtan-myeon, Paju, in Gyeonggi Province, comes to an end on Sunday.

You can check out the Ganghwa Ice Fishing Festival which runs until March 1. Enjoy a variety of activities and historic spots on Ganghwa Island, ranging from Manisan, the island’s highest peak, and a popular hiking trail to Gapgot Dondae Fort, which was an important fortress during the Mongolian invasion from 19th year of King Gojong of Goryeo (1232) to the 11th year of King Wonjong.

Try your hand at trout and smelt fishing or sledding at the Dongjangkun Festival in Pocheon Baegun Valley, which runs until Sunday.

If you catch any fish, you can either free them or eat them. You can choose from a number of various ways to prepare the fish you catch on site.

Due to COVID-19, make sure they are not canceled before going to any of the events. 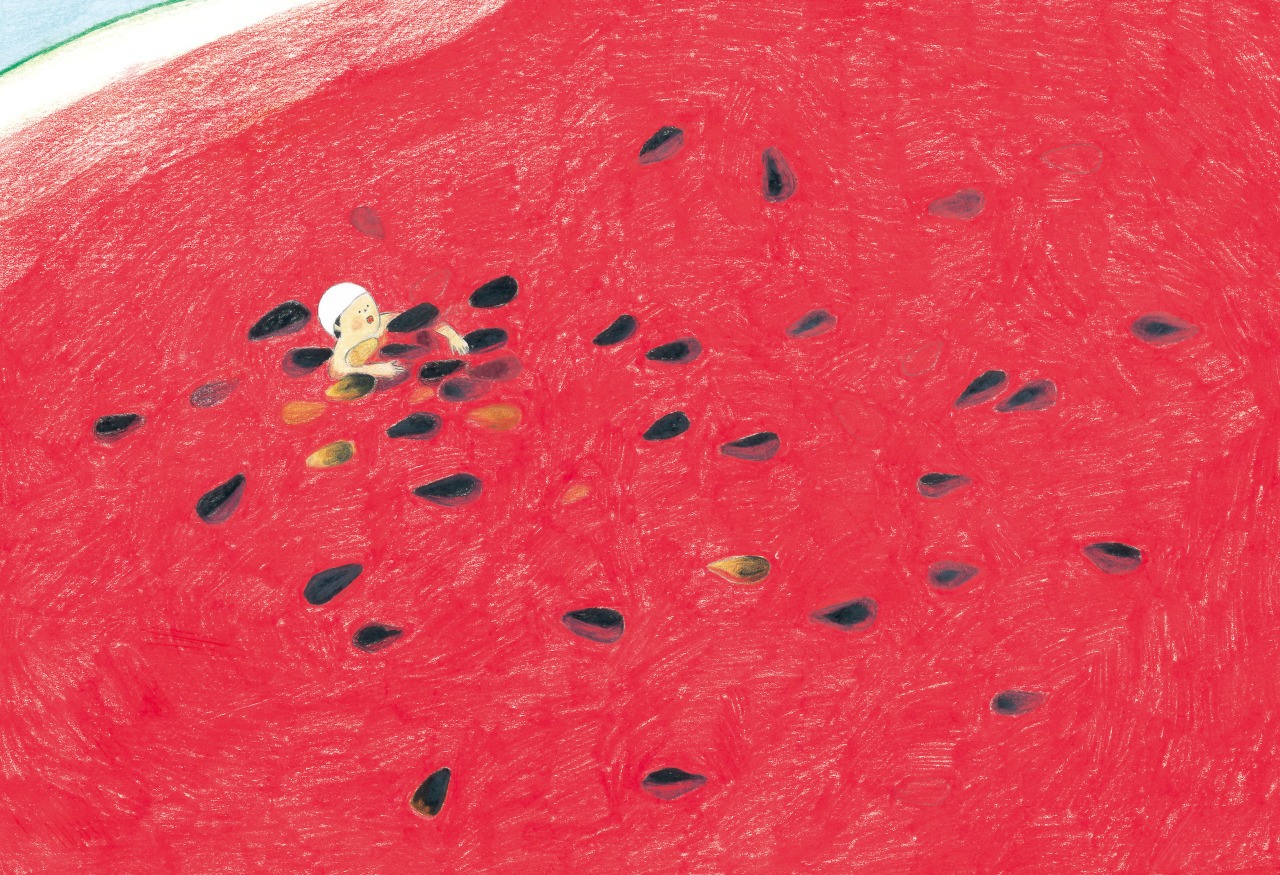 “Watermelon Swimming Pool” by An Nyeong Dal (Seoul Arts Center)
The exhibition “My Very Favorite Picture Book” at Hangaram Design Museum shows works from Korean children’s illustrated books. Some original sketches and digital paintings created for 18 illustrated books by seven illustrators are on display as well as interactive art created in collaboration with media artists, offering a variety of experiences.

The exhibition includes 200 works from 18 picture books by Kim Ji-Young, Hyun Seo, Bonsoir Lune, Yun Jee-hoe, Lee Suzy, Lee Gee-eun and Jung Jin-ho. Among the picture books is “Watermelon Swimming Pool” by An Nyeong Dal that depicts a village where children and the elderly enjoy the newly opened “watermelon pool.” Visitors at the exhibition will be guided through four sections.

The exhibition runs through March 27 at galleries 1, 2 and 3 at the museum. The museum is closed on Mondays.