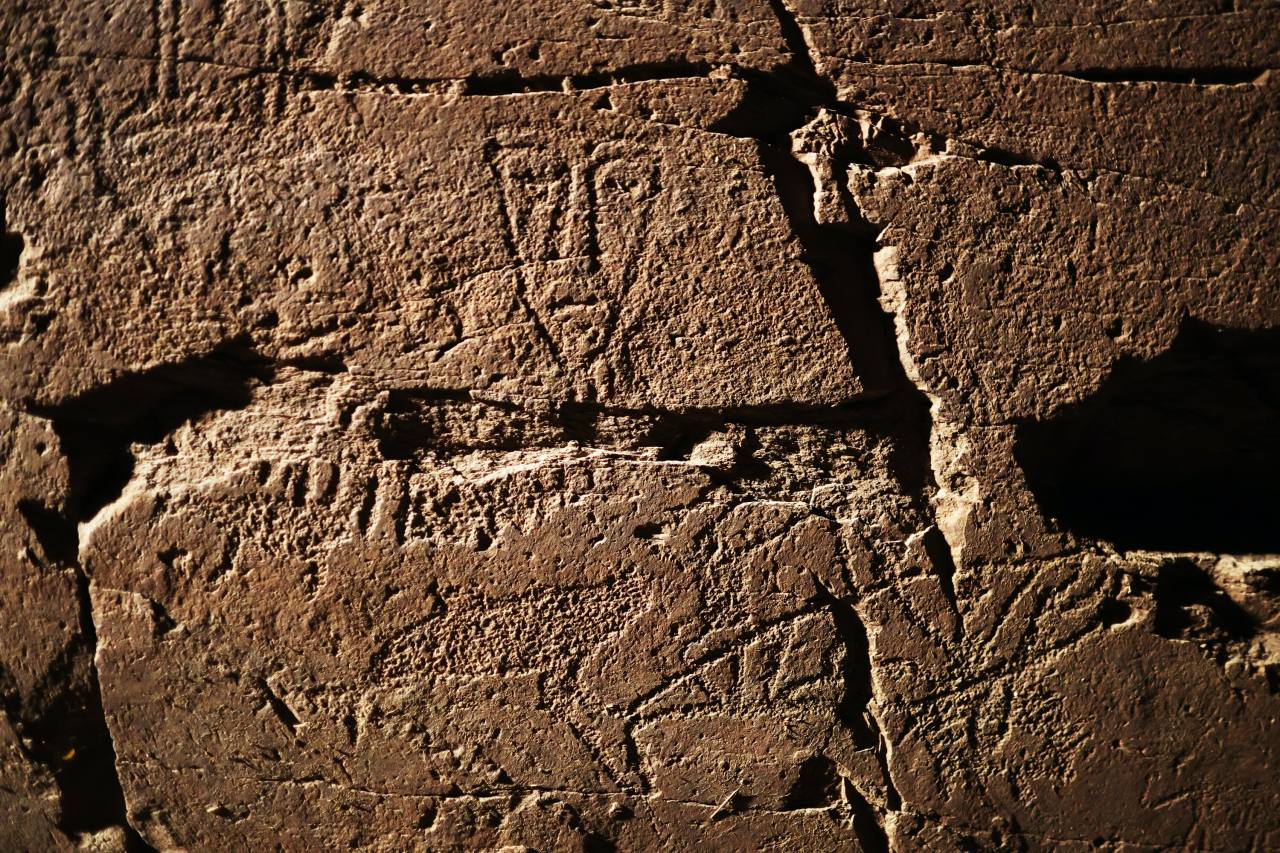 A human face is expressed on the Bangudae Amgakhwa Petroglyphs in Ulju-gun, in Ulsan, Korea. Photo © Hyungwon Kang
The Neolithic Age in Korean history and civilization refers to the period from about 8,000 to 1,500 BC, when ancient Koreans used comb-patterned pottery. Hence it is also called the comb-patterned pottery period, in reference to the combware, the main pottery type of the Korean Neolithic Period.

People have been whaling since the Neolithic Age in Korea, according to the most vivid rock carvings of whaling left by ancient Koreans.
Of the 90 species of whales in the world, some 40 species of whales, the largest mammals on earth, swim through Korea‘s East Sea.

The world’s most ancient rock carvings of whales and images of whale hunting are carved on a vertical cliff face along the Daegokcheon stream, a tributary of the Taehwa River, which flows into the East Sea, in southeastern Korea. 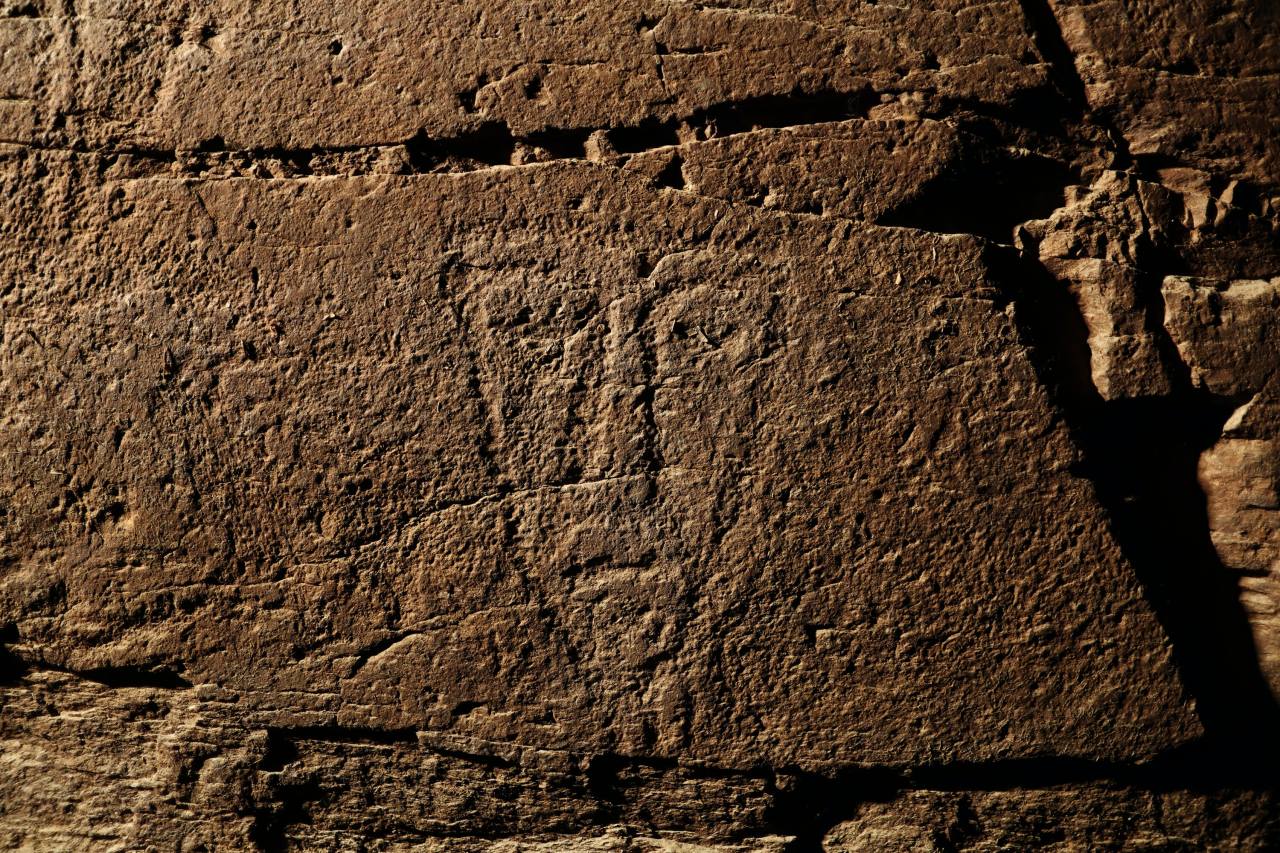 When Moon Myeong-dae, a Dongguk University professor who discovered the Bangudae Amgakhwa Petroglyphs. saw the rock art from a distance, “the cliff face was shiny like polished stone.” the retired academic recalls.

Researchers have identified some 296 images on the vertical cliff face, under a large rock protruding over the cliff face, like a canopy providing cover from direct exposure to rain and other harsh elements, which enabled it to survive several millennia. 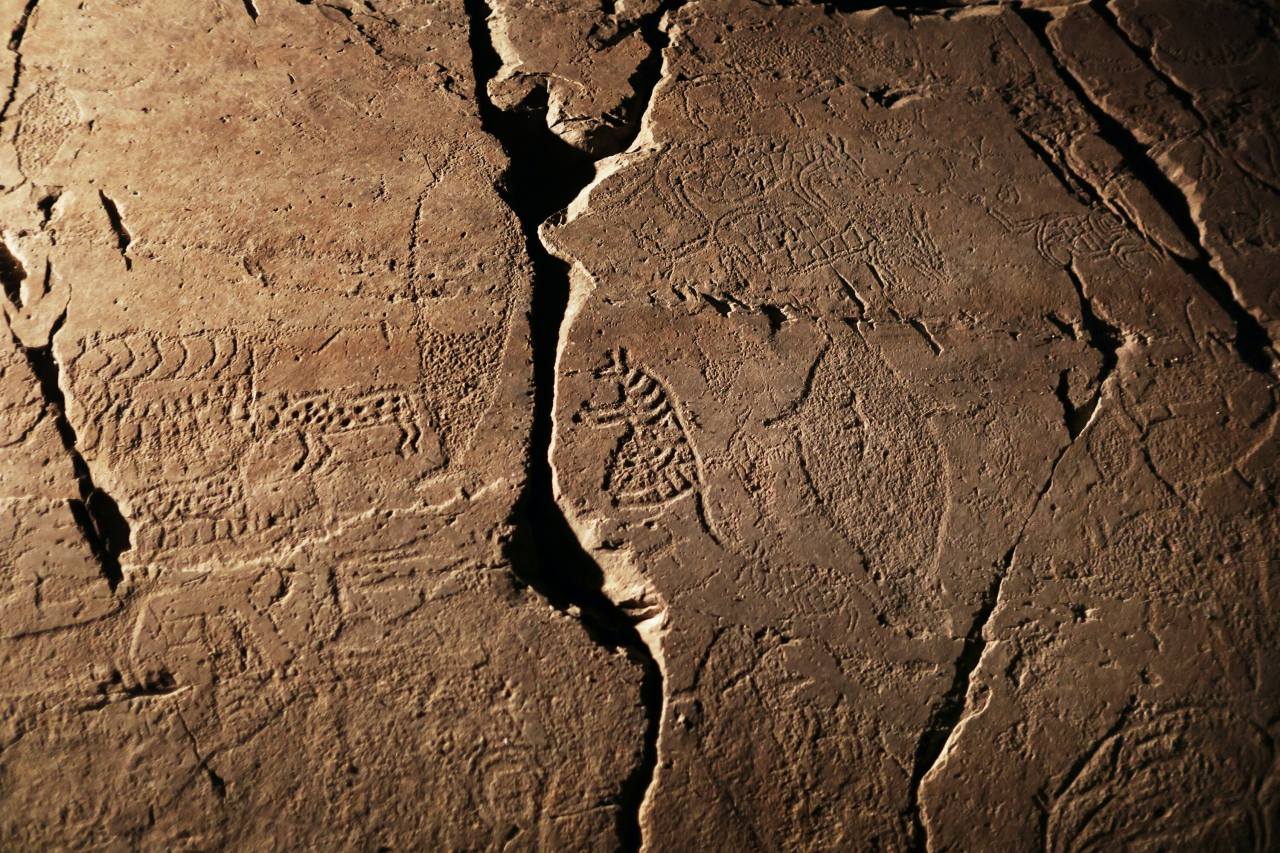 The most ancient rock carvings of whales and whale hunting along with other land animals are expressed on the Bangudae Amgakhwa Petroglyphs in Ulju-gun, in Ulsan, Korea, on a vertical cliff face along the Daegokcheon stream, a tributary to the Taehwa River, which flows into the East Sea. Photo © Hyungwon Kang
The world‘s oldest petroglyphs depicting whaling clearly show 58 whales.

Moon says the rock carvings “carve out the overall shape first by pecking the outline, then chipping out in detail from a specific parts inside to reveal the characteristics of the shape, and although they were carved with a few simple lines and dots, they have a surprisingly vibrant vitality and dynamism.”

The hundreds of images at the rock carving site can be categorized into whales, land mammals, sea animals and human figures, as well as tools. 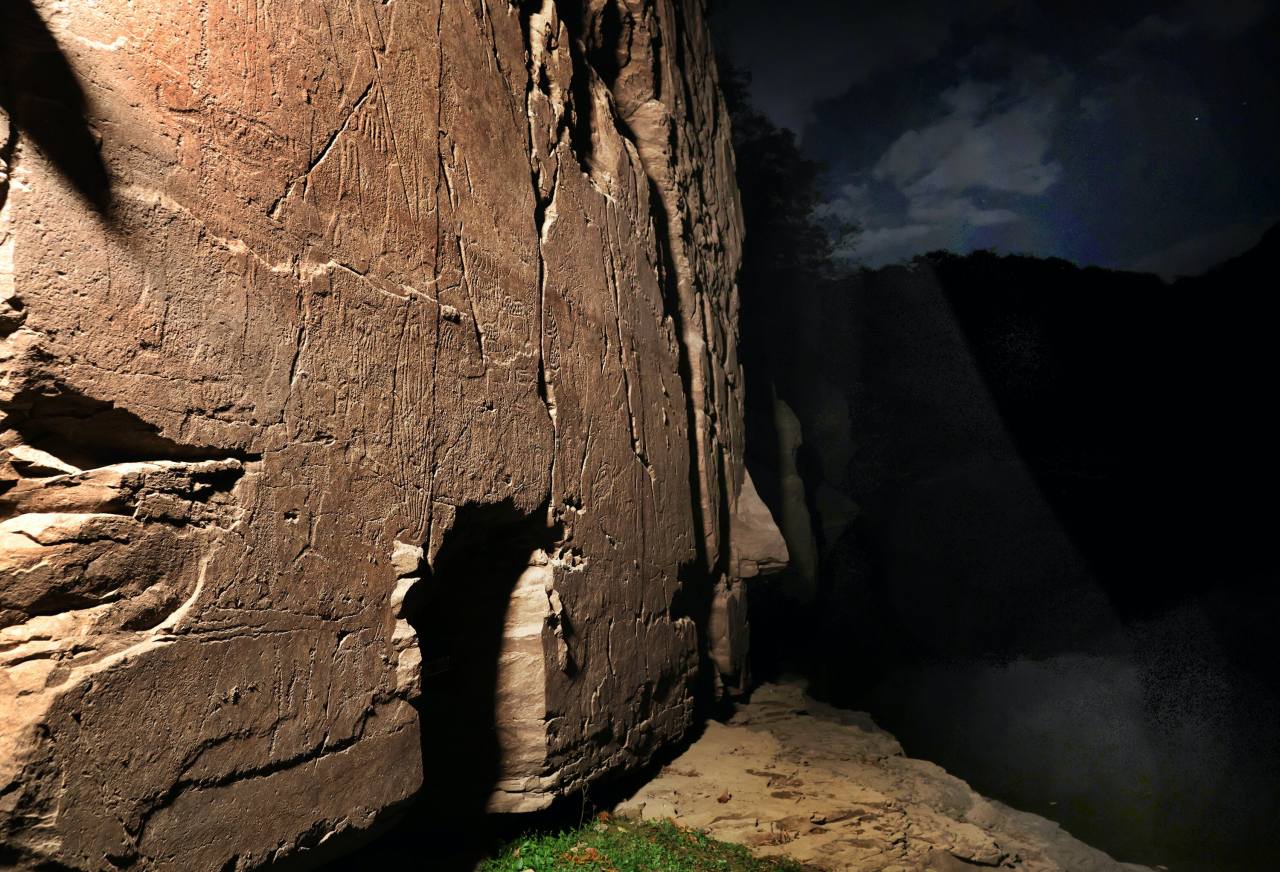 The most ancient rock carvings of whales and whale hunting along with other land animals are expressed on the Bangudae Amgakhwa Petroglyphs in Ulju-gun, in Ulsan, Korea, on a vertical cliff face along the Daegokcheon stream, a tributary to the Taehwa River, which flows into the East Sea. Photo © Hyungwon Kang
Rock carvings of a leopard, tiger, a human face and a sharp harpoon over a whale, among other carvings, stand out immediately even to naked eyes.

Other objects and figures include a canoe-shaped boat carrying people, a large whale that swims upward with sea animals on the left and right that are thought to be seals, a whale that swims toward the right while spouting water, a deer with a long and slender neck and a bulging belly, animals with short, thick bodies and pointed snouts, and small animals that appear to be dogs scattered among them.

Other depictions include men dancing with their genitals extended, people holding objects that appear to be musical instruments to their mouths. A large and small whale swimming in different directions, and a long-tailed beast running briskly toward a person in the upper right area of the stone carving mural. 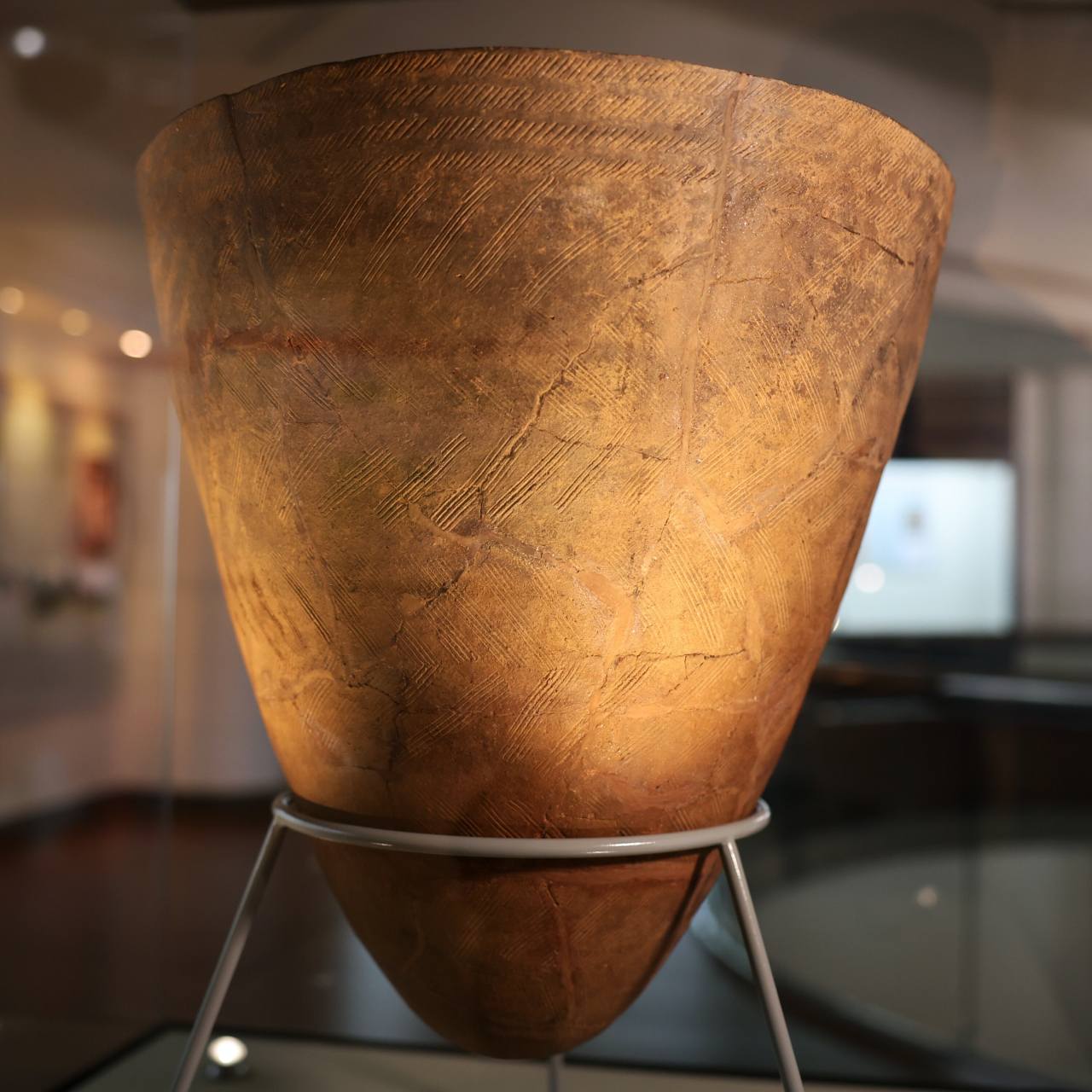 The comb-patterned pottery discovered in Amsa-dong in Seoul is on display at the Korean Christian Museum at Soongsil University in Seoul, Korea. The Neolithic Age in Korean history and civilization refers to the period from about 8,000-1,500 BC, when the ancient Koreans used comb-patterned pottery. Photo © Hyungwon Kang
Historian and journalist Lee Duk-il defines the Bangudae Amgakhwa, thus. “It’s a symbolic site where our ancestors prayed for abundance by offering sacrifices to heaven in a place that was considered sacred.”

Researchers offer various interpretations for the images carved on the cliff face. Scholars, for decades, surmised that the intricate drawings and rock carvings of whales and land animals were created during the Bronze Age.

A consensus following a recent discovery near Busan of Neolithic Age pottery with drawings of a deer, matching the shape and the design of a deer in the Bangudae Amgakhwa rock carvings, is that the Bangudae rock carvings were also probably done around the Neolithic period.

The Bangudae Petroglyphs site, designated as Korea’s National Treasure No. 285, has the most ancient evidence of whaling anywhere in the world, reflecting the abundance of whales off the Korean east coast.

Ulsan, located in the southeast of the Korean Peninsula, not too far from the rock carvings, has always been known for its celebration of whales and many restaurants serving whale meat, even though whale hunting has been technically illegal in Korea since 1985. While whale hunting is banned, fishermen can bring in whales caught in their fishing nets.

During the first part of the 20th century, Japanese whaling ships profited heavily by hunting whales in Korean waters during the colonial period from 1910 to 1945.

In some years, according to newspaper reports from the 1930s, Japanese whaling ships hunted more than 100 whales.