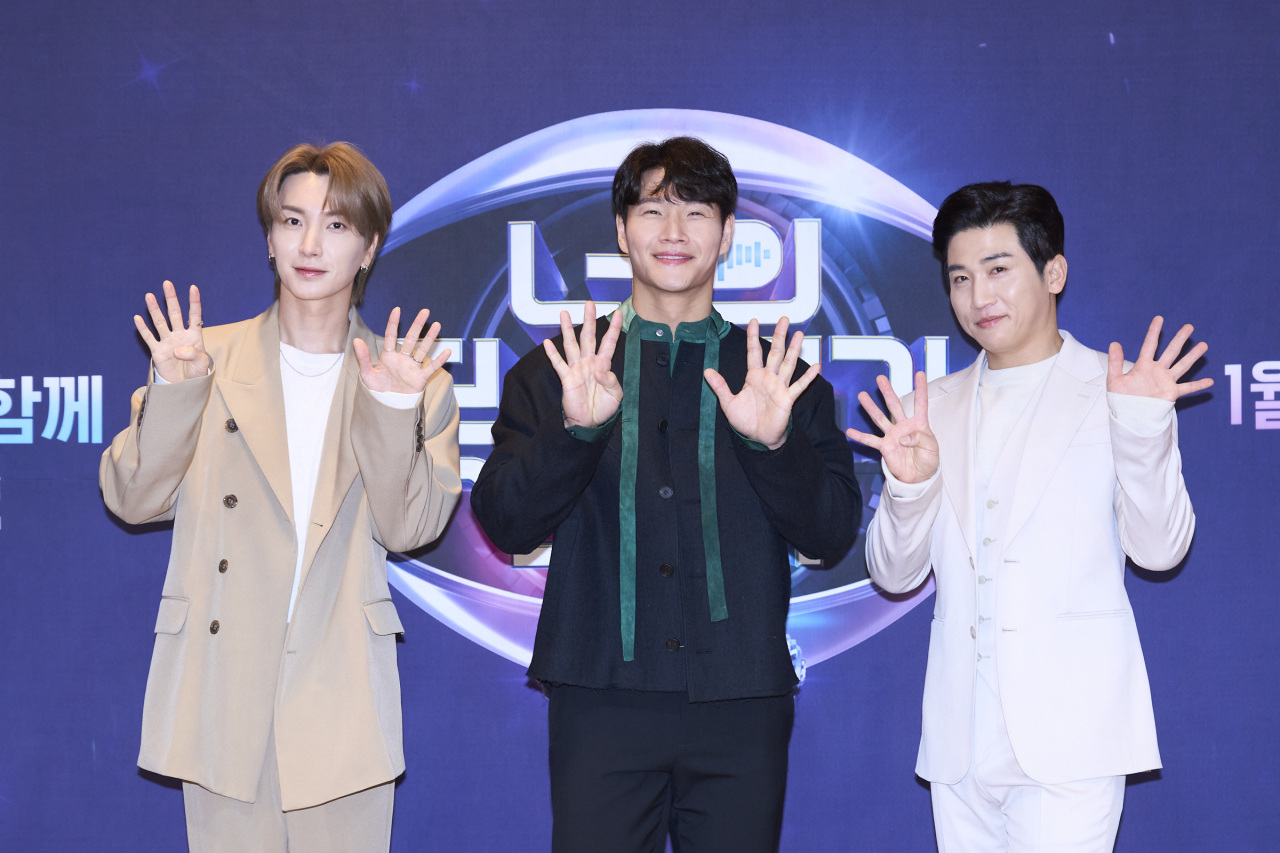 From left: Super Junior’s Leeteuk, Kim Jong-kook and Yoo Se-yoon pose for photos during an online press conference for the ninth season of Mnet’s mystery music game show “I Can See Your Voice” on Friday. (Mnet)
The ninth season of “I Can See Your Voice,” a mystery music game show from South Korean cable music network Mnet, is set to premiere Saturday at 10:40 p.m. In line with the program’s global popularity, it hopes to become a long-running music show.

“I wonder how long ‘I Can See Your Voice’ can last. I wish it to become a long-running program like ‘Show Me the Money’ and ‘National Singing Contest,’” Super Junior’s Leeteuk, one of the three hosts of the program, said during an online conference Friday. “I hope the program will make more export deals with overseas broadcasters.”

Since its launch in 2015, “I Can See Your Voice” has been highly popular in Korea, continuing into its ninth season this year. The show’s success hinges on its unique concept, which centers on guest K-pop stars’ attempts at singling out terrible singers from a pool of musicians based on their appearance and stage manner.

The format has also proven to be successful in many countries that have aired their own versions of the show. The show has export deals with broadcasters of 23 countries, including the US, UK, Canada, France and Belgium. The local variety show was nominated for the 2016 International Emmy Awards, while the US broadcaster Fox is airing a second season of the US version.

“Since the concept of featuring tone-deaf singers has been unprecedented in music programs, it attracted greater attention. ... I’ve received questions from foreign media on why Korean content is receiving sudden attention. But it didn’t happen overnight. Korean content has its own uniqueness,” said Lee Sun-young, the program’s chief producer.

Including Leeteuk, the program’s hosts -- Kim Jong-kook and Yoo Se-yoon -- complimented the program’s staff on their capability and readiness. They also revealed a secret to their long-running career as the show’s hosts -- dull-witted guessing skills. Meanwhile, they hinted that more thrill and excitement are in store for the upcoming season.

“The slogan of the ninth season (of the program) is ‘Have a Good Time.’ It will be a show that viewers can enjoy with their family or friends while relaxing. To provide fresh fun to the viewers, we’ve put a lot of effort into inviting singers who can make new combinations,” said Cha Yae-rin, the producer of the mystery music game show.